SciBarCamb is over, but it was awesome this year! I am the worst at live-tweeting, but luckily Lou and Laura and lots of other enthusiastic Twitter-users were at hand to document every single minute of it, from the intro game to the final goodbyes, so keep an eye on the Schemes and Memes blog for Storify collections of the whole event.
I’ll just leave it to two things here. First, a massive thank-you to everyone who helped out in some way. The organisers, volunteers, sponsors, donors, the staff at our two venues, but most of all the participants – everyone who suggested or led a session, brought a demo, did stand-up, asked questions, and talked to others in the hallways in between the talks. That’s what SciBarCamb is all about!
And that brings me to the second point. One of the challenges of unconferences is to get everyone comfortable enough to talk to each other and work together to create a schedule. Last year at SciBarCamb, we had interactive name badges, that created an animated image when combined in the correct way, and among 100 participants every person had five possible matches. That was a lot of fun, but we didn’t want to do the exact same thing again.

This year, we started out thinking about matching keywords or phrases. For example, Watson and Crick. But you can also match both of them with DNA, and you could pair DNA with RNA, so it got rather complicated. In the end, we went with 12 sets of triplets. Each participant had one word on the back of their nametag, and on opening night they had to find two others from the same set. The first three complete sets won free drinks, and the very first team also got a T-shirt. (Three T-shirts, of course.) 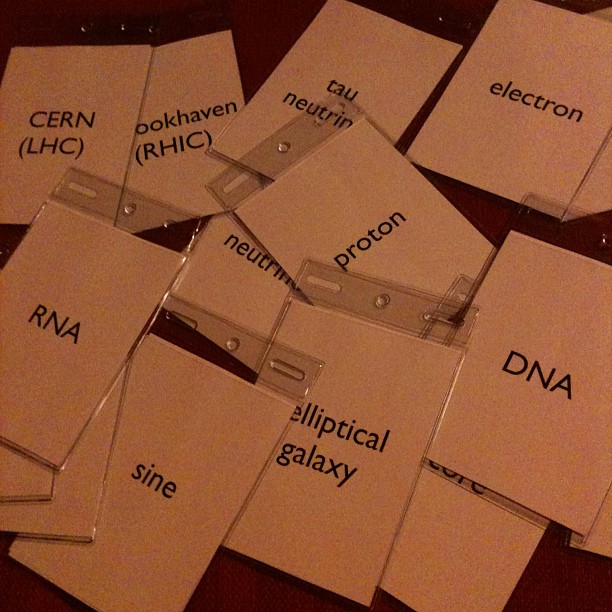 These are the sets of threes we used.

There were doubles running around, but some people didn’t show up, so not all sets were complete. People who arrived late were scolded for not being there when there were free drinks at stake, so this had the added side effect of promoting early arrival – at least after the fact… 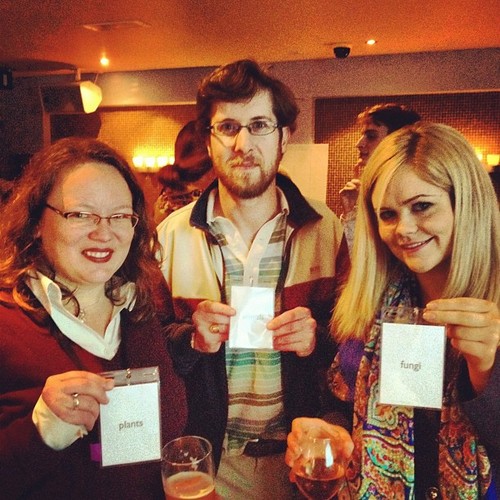 The second team to complete

Because of people arriving late, the third team to complete was not actually complete, but I awarded them their drink for creativity. They were all neutrinos, but one person had manually changed “muon neutrino” to “electron neutrino” on their badge. The argument: this can happen in real life! There was no electron neutrino walking around the bar and they did know what the missing neutrino was, so they got their drink. 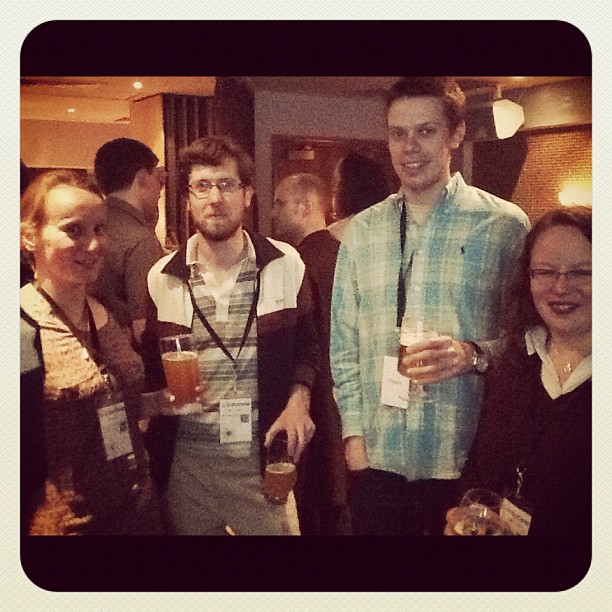 Me, two multicellular kingdoms and a geologic period of the mesozoic era with their free drinks

It seemed to have worked well as an icebreaking activity, giving people an excuse to talk to each other and look at each others name tags.
Feel free to use our sets at your own science event, or adapt/expand them.

Lab-grown meat. Would I eat that?

I'm realising that we wouldn't even notice if we went into the highest lockdown level. We haven't been to a restaur… https://t.co/rHWCvlhKtx

Reply Retweet Favorite
Listening to the #UKCSJ20 talk about newsletters, and reminded that I've been thinking of moving my newsletter(s) f… https://t.co/zirxDPAUE9

Reply Retweet Favorite
Multitasking on multiple devices so I can listen to #UKCSJ20 talks while finishing something else https://t.co/SyNi6d4ZQb

Reply Retweet Favorite
Dolly Parton answers questions that people have Googled about her. I like that she confirmed her vocal range beca… https://t.co/uurpkLyhEj