Graphs on music and academia

It’s a long weekend in the UK, so I’m working on my favourite side project – people who do both science and music. (It really needs a catchy title. Suggestions?) I’ve been doing a bit of writing, but the past weeks were mainly research on music and academia. The research phase never seems to end, but that’s okay, because it might actually be my favourite part. I keep finding out new things. This week, I found a cool infographic, via Michelle Oyen on Twitter, who got it from Marie-Claire Shanahan, who I incidentally happened to meet last week but I didn’t realise at the time that she’s the person who does the Song of the Week on the Finch and Pea. Science/music people, they are everywhere!

The infographic in question was one from the CBC Music Blog about seventeen musicians with PhDs. The top of the image (below) shows the distribution of fields of music and academics of this handful of people. 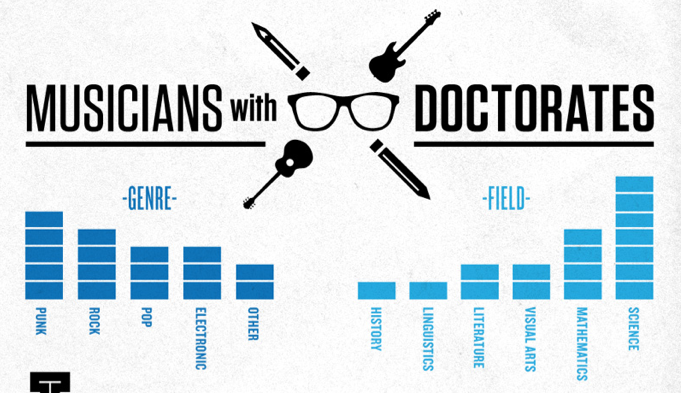 It’s only a small sample, but it’s interesting to note that most of them have science or mathematics PhDs. But as commenter Aeg points out on the article, that might just be an artifact of more people pursuing PhDs in those fields, and it would be good to compare the numbers with a graph of the areas that people generally receive PhDs in.

Even though the musicians in the infographic come from different countries, databases of doctorate holders are usually specific for one country. Let’s look at the US, because they have been keeping track, and the data are all available online.

For several decades, the US government has been using the National Opinion Research Center at the University of Chicago to carry out the Survey of Earned Doctorates – a study that shows which kind of people get PhDs in which disciplines. Even though the total number of PhD recipients has gone up in all fields, the distribution between science & engineering PhDs and those in other fields has been pretty consistent: There are slightly more than twice the number of science and engineering PhDs than others. 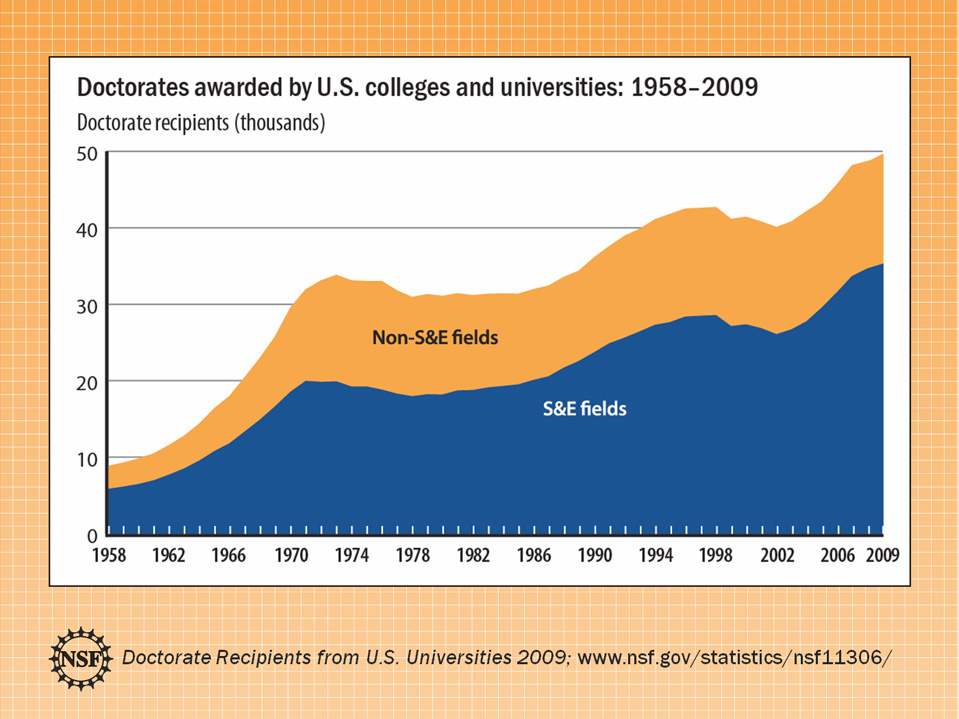 In the music infographic, eleven of seventeen musicians have a PhD in science or math, which is about the same as the overall distribution. So going by this small sample, it seems that of the musicians with PhDs, there are not more scientists than you would expect.

Does that mean that musicians don’t like science more than the average person does? Not necessarily. There is a lot of information missing from the infographic. It’s only a sample of musicians the creators could find, and it’s biased toward fields of music they knew. Punk music is over-represented, for example, and classical music is lacking entirely. It also doesn’t look at the academic interests of musicians who do not have a PhD. If a musician starts to break through while in undergrad, they might choose not to pursue their academic interests further, and instead keep working as a musician. The infographic lists The Offspring drummer James Lilja, but Lilja left The Offspring in order to pursue his doctorate. The band’s lead singer Dexter Holland, on the other hand, abandoned his own PhD so that he could focus on the band.

Both music and academia are very time consuming, and a lot of people make a choice at some point to do one or the other. I’ve been hearing a lot of similar stories in the interviews I’ve done, and read about a bunch of others. The final picture is a complicated one. In this particular graphic, you are included if you finished a PhD and did music at some point, but not if you are so dedicated to music that you quit your PhD for it.

I can give you examples of all these people, but I can’t find a way to quantify them. I’d like to, because it would give me something to base my story on. Does it matter that I have no hard numbers? If I was writing a PhD thesis, it would matter a great deal, but thankfully I never have to do that again. This is not a PhD, this is documenting a phenomenon.

I am happy to have been pointed to this infographic, though, because it gives me a few more people to add to the list of people I really want to talk to.

So, uh, other non-Americans took a few years to figure out what the phrase "ten dollar founding father" in Hamilton… https://t.co/JwGPwcj796

Reply Retweet Favorite
Things I Google at 6:20 AM when I realise I’m out of coffee. (“Starvucks”) opens at 7. https://t.co/7VUfzVZrML

Reply Retweet Favorite
I don't really get how closing the pubs at 10 is supposed to prevent the spread of the virus. Is the assumption tha… https://t.co/hmhX5NsV8e

Reply Retweet Favorite
I'm up at 3:30 to chair a webinar for people in another timezone so I'm just peeking in to see what Twitter is like… https://t.co/AgZuYFKIkj

Reply Retweet Favorite
My to-do list for next week is totally doable if I just think faster and type faster and sleep less.