Top Posts
New on Mixture, writing tips, and other updates
Mixture (the newsletter) got an overhaul
What’s next for easternblot.net?
Twenty years later: My 1999 human genome op-ed
What the zoo can do for you (and...
Book box DIY project
Making science art in Sims 4
Alternative periodic tables
Share Your Sci website is now live!
Launching soon: Share Your Sci
Home Science EverywhereScience at home C-A-K-E spells DNA cake
Science at homeScience Everywhere

It was my turn to bring cake for cake club at work. Your turn only comes around once a year or so, so I thought I’d make something interesting. Inspired by Jonathan’s DNA cake, and by the four colours in use for the four products at our company, I designed a cake with a repeating DNA sequence, that, when translated, becomes a short peptide with the amino acids Cysteine – Alanine – Lysine – Glutamic Acid. Or, in their one-letter codes, C-A-K-E.

There are multiple possible DNA sequences that all spell out C-A-K-E, because the code is degenerate, but I went with this one:

I picked a colour for each base, and started drawing coloured bars underneath the corresponding letters.

Then I figured out how many helix turns would fit on the cake, and how many base pairs would fit in a turn, and when it was time to ice the cake, I recreated my sketch in icing.

Eagle-eyed geneticists will have spotted that I made a mistake, but I didn’t notice this until it was pointed out to me on Twitter after it had already been tweeted and retweeted to at least ten thousand people! 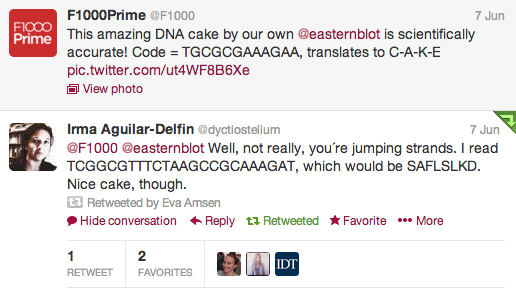 I can’t believe I forgot to consider the turns… After I figured out how many base pairs fit in a turn, I should have alternated every other turn so that the sequence stayed on the same strand.

SARS in the city

Why the hype about eating insects? Google trend sleuthing to the rescue.

Not to rub it in, but the DNA is also coiling round the wrong way… Cake looks delicious though! 🙂

D’oh. I’m not as miffed about that, though, because I have left-right confusion, and simply can’t remember which way it’s supposed to go in the first place. But the strand switching I *should* have noticed…