Top Posts
New on Mixture, writing tips, and other updates
Mixture (the newsletter) got an overhaul
What’s next for easternblot.net?
Twenty years later: My 1999 human genome op-ed
What the zoo can do for you (and...
Book box DIY project
Making science art in Sims 4
Alternative periodic tables
Share Your Sci website is now live!
Launching soon: Share Your Sci
Home Science Everywhere Alternative Energy at Hillside
Science EverywhereTravel & places

This past weekend I attended Hillside Festival in Guelph, Ontario. Apart from a terrific musical line up, the festival prides itself on making as little as possible negative impact on its surroundings. As part of this mission, Hillside uses alternative energy sources to power soms of its stages. The power used on the big Main Stage is offset by wind credits, and the smallest stage, the Sun Stage, is powered by solar energy. 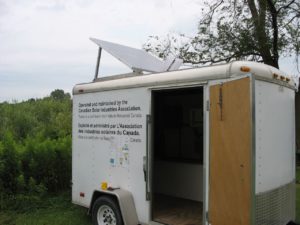 The solar panel that powers the Sun Stage (pictured below)

This stage hosted “spoken word” sessions from 11 Am until about 5 PM, and “music workshops” from 5 PM onwards. I was curious about the way the Sun Stage was powered, so I asked some detailed and specific questions on the Hillside message board to find out how the energy is being dispensed.

This is the reply I got:

The Sun Stage is solar power possible because of the size of the load. The PA (vocals/spoken word) and amps only pulled 20-25 amps from the battery bank at any given time. The stage operates from 11am til dusk Sat and Sun only Ã¢â‚¬â€œ no lighting, no banks of speakers/amps, less power time.

The storage battery bank is fully charged prior to arriving on site. The solar panel does generate power and tops up the bank with sufficient sunlight. It by no means generated the required stage power. Over the festival weekend the battery bank was depleted 50%. It is common practice to plan for only using half the battery capacity. So, any generated or stored power remaining leaves Hillside with the trailer.

The solar trailer is a silent green alternative to a gas powered generator. The other 3 stages are grid powered and draw immense amps.
A battery bank for, say, the Island stage would not be feasible technically nor for the cost.

For further questions you can contact Scott Cooper of Merlyn Power.
He was the site technician and presented at the Enviro Tent.
www.merlynpower.ca

So if I’m understanding this correctly, the overall energy used at the Sun Stage over the entire weekend came from the solar panel and from 50% of the backup battery. It was a tiny stage and a very sunny weekend, so I can imagine that this isn’t feasible for bigger stages, but it’s still really cool to have at least one stage almost entirely powered by the sun!

[Thanks to John Farley and “tragically hippie” at the Hillside forum for answering my questions.]