I had been meaning to go to the Café Scientifique gatherings for a while, but always forgot about them until two days too late. This weekend I finally made it!

Café Scientifique is what I imagine the 19th century was like, when scientists were still “natural philosophers” and chatted about their research in the pub with their friends who were not doing science at all.

Café Scientifique meetings are organized around the world, and invite people to talk about a scientific topic in a casual setting. Attendees are interested in science, obviously, but not necessarily scientists themselves. Anyone can attend, so the topics are presented in a way that anyone can understand.

The Toronto Café Scientifique is hosted by Julie from the Ontario Science Centre, every third Saturday of the month in the backroom of the Rivoli. I’ve been to the Rivoli several times to support local bands, even earlier this week, but until yesterday I hadn’t been to support science communication. It’s odd and cool that it’s in the same room. The stage was already set up for the band that would be playing that night.

This Saturday’s topic was: “Nuclear Energy: Friend or Foe”. The experts were Thomas Adams, debating against nuclear energy, and Ron Oberth of AECL taking the pro-nuclear stand. They brought up issues such as the advantage of low emissions and low waste volume, and the disadvantage of safety concerns and cost. The audience seemed to be either against nuclear or without clear opinion, with the notable exception of the guy who worked in the nuclear energy industry and was naturally all for it. People had a lot of questions, mostly concerning safety of nuclear energy, and the general consensus among both sides of the debate was that it was a matter of trust. We have no choice but to trust the people who design, implement, and carry out the safety regulations concerning nuclear energy. For a lot of people it’s not easy to put so much trust in people they don’t know, while others have a lot of faith in the experts in the field and don’t understand the problem.
What everyone seemed to agree on was that nuclear was definitely more environmentally friendly than coal, but that “clean coal” could play a greater role in the future of energy production. 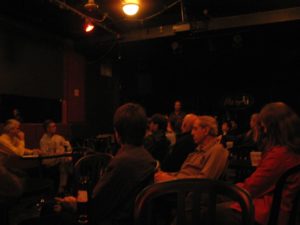 Clearly, a discussion like this could be followed by anyone, but it’s good to be able to casually sit down and talk with people who know what they’re talking about, rather than reading their opinions in the newspaper and discussing the matter with your non-expert friends. I had no clear opinion on nuclear energy myself, so I liked having all the pros and cons listed for me, with no doubt that they were real, scientifically based, arguments. Now I can try and weigh the issues of safety versus environment, which I wasn’t able to do previously, because I was, as local TV advertisements say: “unclear about nuclear”.

The next Toronto Café Scientifique is on November 18. Check the website to see if there is one near you!

Fourth rock from the sun – lab move to MaRS

Apple science in the classroom?

One thing that would benefit everyone is a sense of perspective – which the public has little of for energy supplies. We understand warfare and it’s basic technology because we’ve got a lot of veterans and lot of decent movies on it. We don’t have the same understanding of electricity generation. It’s hard to do on a large scale no matter what your supply – fossil, nuclear, wind, or squirrels on treadmills.

I’ve tried to provide some perspective – particularly on nuclear – with my novel “Rad Decision”. It is available online at no cost to readers at http://RadDecision.blogspot.com – and they seem to like it, based on their homepage comments.

I’ve worked in the US nuclear industry over twenty years, but have no problem with other, workable solutions. (It’s the workable part that’s the rub.)

Oh wow! Wetherspoons are always in really nice buildings but I've been avoiding them since 2016 b/c of the blatant… https://t.co/bhlzcAap0J

Reply Retweet Favorite
Great to see lots of familiar and new faces at #ukcsj22 today! This is a niche reference, but like @AmyJaneBourke s… https://t.co/y7WfgOR0N7

Reply Retweet Favorite
“You couldn’t wait for Reuters or BBC. You had to see what was going on on Twitter.” @natashaloder on the speed at… https://t.co/QOM5N6PlKp

Reply Retweet Favorite
"It's hard to undo myths once they're out there." - @thedalstonyears talking about early COVID reporting on hand sa… https://t.co/PmQ7rHOpvB

Reply Retweet Favorite
If you're in London today and looking for something to do, I'm playing in a concert at St Giles (the church inside… https://t.co/xAv841MYs8