My Childhood Inspirations: Cartoons and comics

Amy’s post about Captain Planet reminded me that I had some notes lying around for a post about cartoons and comics as my own childhood inspirations. They’re not all things that led to science, but one of them very obviously is, and the rest also contributed to who I am today, so you get them all.

I grew up mostly in the eighties, mostly in Holland, but spent a few years (age 7-9) at an American school in Morocco. I read a lot of books, and went through pretty much all Dutch and English language children’s literature. However, I’m very visually oriented, and the things that really made a lasting impression on me were comic books and cartoons. I can even trace back some of my current interests and values to things that flashed by my eyes when I was little:

Bamse is a Swedish cartoon and comic magazine. I started reading the Dutch translations of the magazine when I was six or seven, and even got my hands on some copies while we were out of the country. The stories were about the strongest bear in the world, and his anthropomorphic animal friends. I named our dog and our turtle after characters from the Bamse comics, that’s how much I enjoyed it.* Every issue of the magazine contained a page with something educational.

I don’t remember all of the educational pages I saw as a kid, but I do remember two of them very strongly**. One was the story of the peppered moth. I distinctly remember that as my first introduction to selective pressure and evolution. I don’t remember which words they used to tell the story, but I very clearly remember a picture of a factory with smoke and different colour moths on white or black trees.

The other page I remember was about the genetic code: On this page Bamse, or one of his friends, was pulling open a drawer from a filing cabinet, and it was FULL of information, and the filing cabinet was also REALLY BIG. The article explained how the filing cabinet resembled genetic information stored in DNA. This was my first introduction to DNA! So I learned both genetic encoding in DNA and evolution by selective pressure from a Swedish kids magazine before I had ever heard about it in school.

Inspector Gadget aired at about 7:30 AM on Saturday or Sunday morning. To be sure that I didn’t miss it, I’d get up an hour before it started so I could be completely ready and in front of the TV watching the cartoons channel when it was on. My favourite thing about Inspector Gadget were of course all the gadgets. He had built-in rollerskates, guys. Who wouldn’t want that?! Possibly even more interesting than the roller skates (which I owned anyway, even though I had to put them on) was Gadget’s niece, Penny, and her book. She had an electronic book in which she could look up information about everything, and even control other electronic equipment. It was the best thing ever! I wanted that book! Fifteen years later I owned my first laptop, and another five years after that I got one with wireless internet. I’m sure many of the people who spent last week in line at Apple Stores for their iPhones also grew up with Inspector Gadget and Penny and her awesome, awesome book. 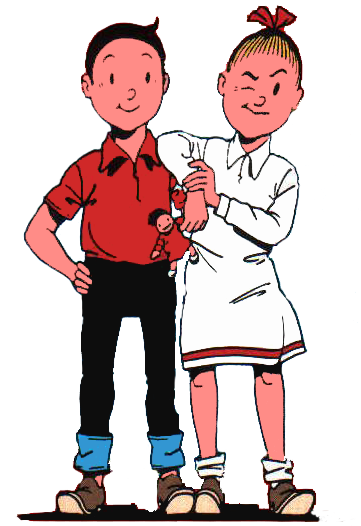 Someone once asked me if we had the Smurfs on TV in Holland as well. Of course we had the Smurfs, they’re from Belgium! Belgium is the mecca of comic book enthusiasts and birthplace of many interesting comics. The Smurfs made it big internationally to the point that people apparently think they’re American, but some things don’t work in translation and wouldn’t be appealing to an international audience. One of these things is “Suske en Wiske”, a series of Flemish comic books so immensely popular that after the death of its main creator the studio continues to produce works under his name. Does that sound familiar? It was apparently translated, but never reached the popularity it had in Belgium and Holland anywhere else.

Suske and Wiske are two kids who live with an aunt. Other characters include Lambik, named after a type of beer, and Jerom, the strongest man in the world.There’s also a professor with a time machine, which allows the characters to travel anywhere in space and time. Many of the stories are based around historically or geographically interesting things, and because the settings are based on real locations I’d often later find out that I recognized things from the comics.

I have about 50 of the Suske en Wiske comic books, and can’t recall them all on the spot, but because I read a lot of them at a very young age they were sometimes my first introduction to certain themes.

I understood quite a bit about the failures of some political systems that were the background of a story in which the characters were stuck on an island together with people from around the globe. In another story, they travel to Tibet, and I had never seen a lot of pictures from Tibet when I read it, so every time afterward I recognize the cartoon settings in pictures from Tibet (instead of the other way around). Another issue was about various characters from Norse mythology, with mythologically accurate descriptions. Every time I hear about Thor or Freya or Hugin and Munin, images from the comic still pop up in my head.

At around the same time I was really into Bamse, I might have spent just slightly more time obsessing over the Care Bears. This obsession was widespread and international, and I shared it with my friends in Holland as well as with my friends at the American School in Morocco.

I had all the Care Bears merchandise I could get my hands on, and since it was the eighties, that was a lot. Some kids from school had more Care Bears stuff than I had, and that was terrible. One day when I was out with my mom, one of my Care Bear plush toys came along, and his head was sticking out of my mom’s purse so he could breathe. Unfortunately, the disproportionately huge heads that make Care Bears so cute also makes it really easy for them to either fall out of a bag or be snatched by someone… Grumpy Bear was never as grumpy as the day he didn’t make it back home with me.

One of the Care Bears comic books that I had contained an explanation on how to make your own magazine holder from a cornflake box as part of a “how to clean your room and be organized” feature. I really needed one of those, as you can tell from this glimpse in my comic book heavy past… My mom helped me make it by buying the correct size cornflake box, cutting it, and putting on sticky back plastic. (My contribution was selecting the pattern of the plastic: it had Disney characters on it.)
Last year, I was short of magazine holders again and, remembering the frugal Care Bears, I made one myself from a cornflake box. It doesn’t hold Bamse and Care Bears comics this time, but my current choice of reading material was influenced by many things I saw and read when I was younger than ten.

Growing up among cartoons

Pop culture gets into kids’ heads no matter what, but the parts of it that stick can be surprising and unpredictable. The Pokemon kids are in high school now (university even, if my math is right), and I’m curious what kind of messages they ended up with: catch every animal you find? Fighting pets is good? Or a message about genetic diversity or the power of perseverance? It probably depends on the kid, and things that might have a bad influence on one could have a good influence on another. Video games may have been linked to violence, but other kids might spend their time playing the same video games and decide they want to learn computer programming and make their own games.

Growing up in the eighties, I was among the first generation who did all this growing up while surrounded by an unavoidable excess of pop culture. We’re all adults now, and the upcoming generation of cartoon and comic enthusiasts have parents who themselves spent hours watching He-Man and playing Nintendo. It’s a whole new, YouTube-infested world these days, but remember that even things that look like random amusement on the surface can hold some lifelong messages.

(Next time (or: some time) a list of pop culture references immortalized as names of genes. I’ll make it into a game, maybe.)

* Naming pets: Our turtle was named after the turtle in Bamse, but the dog was named after the rabbit, because my mom didn’t think the series’ dog’s name matched our dog, so I had to pick another name. Years later, my sister named a cat after a dinosaur from The Land Before Time. I also had a guinea pig called Snoopy. Our poor cartoon-inspired pets. My current cat is named after a Beatles song, not after Penny from Inspector Gadget, and the cat that grew up with me was named after an old Dutch childrens song about cats, so we do try to throw in some music once in a while.
** These two pages might have been in the same issue – it sounds like they fit a theme – but I remember them being separate. They were definitely not on the same page, and the moth story was not linked to DNA as directly as it would have been if it were in the same issue as the filing cabinet analogy. It also seems unlikely that one issue would have TWO educational sections in it, so they probably really were in separate issues. I’m sorry if I can’t remember the detailed layout of magazines I read when I was seven…

What will you be? Doing science vs being a scientist

Protocols for taking care of living things in my absense

Working through the genetics of Animal Crossing New Horizons. Ever since I learned that flower breeding follows Men… https://t.co/VckBu2pyCE

Reply Retweet Favorite
Coming up with new scientific ideas is a creative process that requires scientists to imagine things that don't exi… https://t.co/rH2fSgasap

Reply Retweet Favorite
Have you played with the Google Doodle yet? It's an interactive mbira (instrument) with a story and history. https://t.co/bDfqepYXiG