Top Posts
New on Mixture, writing tips, and other updates
Mixture (the newsletter) got an overhaul
What’s next for easternblot.net?
Twenty years later: My 1999 human genome op-ed
What the zoo can do for you (and...
Book box DIY project
Making science art in Sims 4
Alternative periodic tables
Share Your Sci website is now live!
Launching soon: Share Your Sci
Home Musicians and Scientists Alexander Borodin
Musicians and Scientists

The logo of my “musisci” project is the same erlenmeyer flask used on my easternblot blog, but half-morphed into a treble clef. It symbolizes the science/music connection, but could easily have been the personal logo of Alexander Borodin. 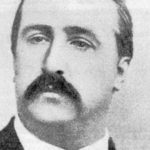 The erlenmeyer flask was invented by German chemist Emil Erlenmeyer in 1861. Around this same time, from 1859 to 1862, Erlenmeyer was also supervisor to Alexander Borodin, who did a postdoctoral fellowship in Erlenmeyer’s lab. Borodin was a prolific chemist, who got his name in chemistry textbooks as one of the discoverers of the aldol reaction, but in his spare time he was a composer. He managed to be in touch with prominent people in both fields: Aside from working with Erlenmeyer, Borodin was also friends with Mendeleev – the inventor of the periodic table – and with composer Rimsky-Korsakov. The latter completed Borodin’s opera Prince Igor after he died in 1887, at a fancy dress party, from a burst artery in the heart.

Borodin considered himself mostly a chemist, and didn’t think much of his musical work. He referred to himself as a “Sunday composer”, but these days he is better known for his music than for his science. In 1953 he was posthumously awarded a Tony Award for the musical Kismet, which was based on his original scores. Some of Borodin’s most famous works are the Polovtsian Dances from Prince Igor and the Nocturne from his String Quartet No. 2 in D.

Mikhail Fokine’s choreography for the Polovtsian Dances by Borodin, as performed by the Kirov Opera and Ballet under Valery Gergiev.

Pacific Strings play Nocturne from String Quartet No. 2 in D

I dream of Jenny

Cool post, I specially like the video with the excerpt of the Polovtsian Dances. I’ve posted a video with music of Alexander Borodin performed by the Berliner Philharmoniker at my blog, feel free to visit.

An interesting way to approach to scientist/musician connection is to look at Nobel Prize winners. Einstein is often mentioned. Bill Lipscomb (Harvard) is an excellent clarinetist. Manfred Eigen is a significant musician. Richard Feynman was a VERY serious bongo player. There are more; one only need go looking.

Good idea! I need some numbers at some point, and x% of (science) Nobel laureates being musicians would be a good stat to throw around. I didn’t know of Lipscomb and Eigen’s musical pastimes, so clearly need to read everyone’s bio at some point.