Top Posts
New on Mixture, writing tips, and other updates
Mixture (the newsletter) got an overhaul
What’s next for easternblot.net?
Twenty years later: My 1999 human genome op-ed
What the zoo can do for you (and...
Book box DIY project
Making science art in Sims 4
Alternative periodic tables
Share Your Sci website is now live!
Launching soon: Share Your Sci
Home Science in Art & Culture Better off Ted? TV better off
Science in Art & CultureScience on screen

Better off Ted? TV better off

I watched the pilot episode of Better Off Ted a while ago, and have no intentions of watching any more of it.

Better Off Ted is a show about a guy called Ted who manages a R&D company that will make life better. The “scientific advances” the company works on are the ones that people thought of as “futuristic” way back in the 1960s. (In the future people can grow an extra arm! In the future men can be pregnant!) In the pilot episode there is talk of weaponizing pumpkins, and one of the scientists gets frozen (for science!) and accidentally thawed when the tank falls over. Wait, it gets worse: the latter event was one of the main plot points.

Funny or not, you may be wondering whether (aside from the absurd research goals) the scientific life was represented at least somewhat realistically. After all, in a show about science you’ve got to do something right, right? Surely they’d show a proper lab, and not one filled with random objects and coloured liquids? You all know how I feel about coloured liquids…

Haha! No, it’s horrible. The coloured liquids are helpfully indicated with red arrows: 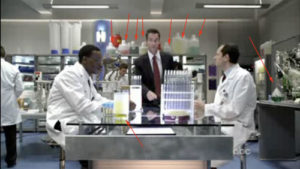 Take special note of the elaborate distillation equipment to the right, with the green liquid in it. 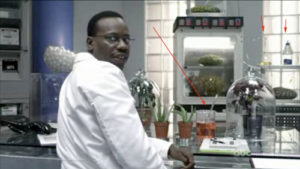 Sure, just leave your pipette sticking in the orange Kool-aid just the way the prop department set it up. Where’s your pipetter? What are those ping pong balls and plants for?

Visual learning works for me

Correcting an error in my thesis. People from the future can’t mock me anymore

You don’t think you’re taking all this a mite too seriously?

Hm, no. I really don’t like the coloured flasks. It’s a pet peeve. If it was farce it might have been okay (in a “Haha, look at my chemicals!”*POOF* – kind of way) or even as a cartoon (see “Dexter’s Laboratory”) but as background set decoration I don’t approve.

Another few issues: there aren’t any teetering stacks of dog-eared papers on their desks, people don’t look frustrated, the benches are way too clean, and I don’t see a single post-it note anywhere!

The ping-pong balls are my favorite, though.

Hahahaha! This cracks me up! I do agree with you Eva, it annoys me too!

It all looks to clean and to hightech (in a ‘just cram a lot of unexplained tubes in there’ kind of way). There is not a ‘blauwe bak’ in sight. Where’s the unavoidable trash? Why are there OPEN liquid filled containers on the cabinets? Why is nothing marked? Where are all the pipetters? Why does the guy look like he’s about to overdose on ethidiumbromide?? 🙂

Hm, correction to second paragraph: to clean, to hightech should of course read ‘too clean too hightech’. Geez
Small addition:
Jesse: good point about the post it notes! I’d also like to add Sharpies, never seen a lab without them 🙂

Remind me to tell you the story of the famous MacLean’s Magazine photo of Lap-Chee Tsui when the CF gene was discovered. Coloured lights, blue liquid, and a metric sh*tload of scintillation vials were used.

It looked awesome in print, but we laughed our butts off when it was being taken.