Top Posts
New on Mixture, writing tips, and other updates
Mixture (the newsletter) got an overhaul
What’s next for easternblot.net?
Twenty years later: My 1999 human genome op-ed
What the zoo can do for you (and...
Book box DIY project
Making science art in Sims 4
Alternative periodic tables
Share Your Sci website is now live!
Launching soon: Share Your Sci
Home Musicians and Scientists Interview with David Bradley
Musicians and Scientists 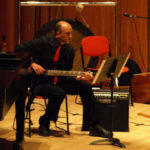 David Bradley is a freelance science writer who also sings in a choir and plays guitar. I interviewed him by e-mail about his science/music pursuits:

What’s your day job and (educational) background?
I’m a freelance science writer with a training in chemistry

You recently performed with the choir “BigMouth” in Cambridge; what was that performance (and how did it go)?
BigMouth is a purely for fun choir made up (mostly) of the parents of the kids in two other choirs: TongueTwisters (the little ‘uns) and VoxPop (the teens). Some time last year our musical director and pianist Siobhan and Tim Lihoreau decided we should go pro (just for one day), so they hired West Road Concert Hall in Cambridge and we started rehearsing in earnest. The evening was pretty much sold-out (short of a dozen or so seats). We had great fun and I got to show off a little bit of guitar playing too.

Are there any other scientists in the choir?
We’ve got a couple of software and systems engineers, a telecoms guy and a couple of GPs, and that’s just the male voice section.

Do you do anything else musically?
Yes, I’ve played guitar since I was 12, which seems a long time, and have recorded a few bits and pieces. I alternate between acoustic finger-style gentleness and all-the-way-up-to-11 heavy rock noise. I also try to play the piano (badly) and have a Venezuelan nose whistle that annoys our dog. I tried saxophone at school and sometimes squeeze a few notes from my daughter’s clarinet.

How long have you had musical hobbies?
I always liked banging drums as a kid and had toy guitars from toddlerhood, but I started attempting to play guitar properly when I was about 12…figuring out the chords and riffs for all kinds of dodgy heavy rock songs and, of course, Stairway.

You talk to a lot of scientists, and after an epic attempt to aggregate all the scientists on Twitter, you also created a Twitter list of people who are both scientists and musicians. What prompted that?
I think I’ve got about 1000 scientwists listed in various twitter lists. Having categorised them as bio, chem, phys, etc, the next logical grouping was musos…there are a lot of scientific musos out there as you know…

Based on the Twitter list, I assume you must have given this some thought: Do you think scientists are more likely to be musically active than non-scientists?
Isn’t it just that scientists are like everyone else and enjoy music listening and sometimes playing? Being a musician as well as a scientist isn’t a surprise. Finding a professional sax player or a classical pianist who happens to be an amateur scientist is a lot less likely than a bass-playing biologist or a singing science writer for that matter.