Top Posts
New on Mixture, writing tips, and other updates
Mixture (the newsletter) got an overhaul
What’s next for easternblot.net?
Twenty years later: My 1999 human genome op-ed
What the zoo can do for you (and...
Book box DIY project
Making science art in Sims 4
Alternative periodic tables
Share Your Sci website is now live!
Launching soon: Share Your Sci
Home Science EverywhereCreative & design Synesthesia and procrastination
Creative & designScience at homeScience Everywhere

Sometimes I put things off for too long.

In December 2008, right after I defended my thesis, my friend Liesbeth e-mailed me to ask if I wanted to write about synesthesia on my blog. She had just been reading a book about it, called The Frog Who Croaked Blue, and was very excited about the topic, because she had had synesthesia herself since she was a kid. The numbers 1 through 5 were coloured, she told me, and some letters as well. “It’s useful for remembering passwords”, she added.

When I didn’t write the post right away, she asked about it again two weeks later. I really thought I would have time to read the book and write the post sometime soon. But I got distracted with other things. The holidays were coming up, I started a six-month contract job in January, I started looking for freelance and full-time work, travelled all summer, and a year later I still hadn’t written the post when I prepared to move to England.

I always had the topic in the back of my mind, but I just didn’t really know what to write about it. I’m not a synesthete myself, and didn’t know much about the neurology behind it either.

Meanwhile, Liesbeth wrote about it on her own blog in January of this year. It’s an arts/craft themed blog, showcasing all the projects she had been working on in her spare time, or old art school projects. One time she found a colouring book for adults in her favourite magazine, and seeing an image with mostly text, she decided to colour in the letters to match the colours they always looked like to her. At the time, she was also writing a thesis about synesthesia for her art academy teaching degree. In the same blog post, she wrote that until she read The Frog Who Croaked Blue a year earlier – the same book she recommended to me – she always thought that everyone saw letters as colours, and dates in space. When she gave a presentation at her art school, two other students came up to her after class and said that they, too, thought that everyone had that, and didn’t realize it was a unique thing until her presentation. 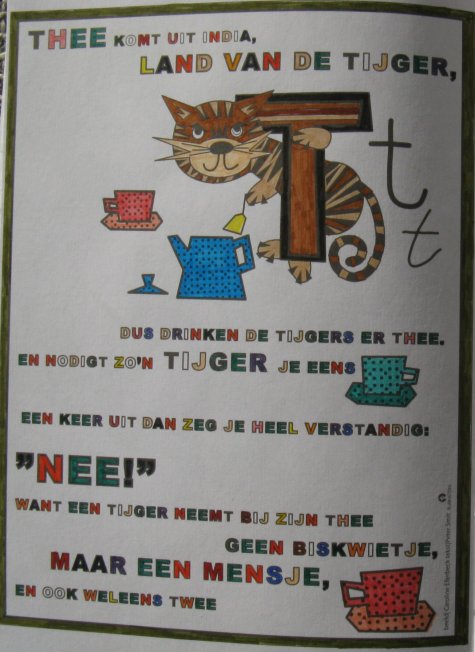 In the English summary of her synesthesia blog post, Liesbeth explained: “Each character corresponds with his own colour. Some characters are very clear, like the ‘m’ (red), ‘n’ (orange), ‘s’ (blue) and ‘u’ (pink), others not. But I have a strong feeling of colours then, for example the ‘g’ and ‘k’ are a combination of black and green. ”

The picture is a cute poem about tigers and tea (I don’t know the source) which unfortunately doesn’t contain all the letters of the alphabet, so I don’t know what the rest of the letters would look like to her.

And I can’t ask, because Liesbeth passed away very unexpectedly earlier this week.

In between shock and disbelief, I started feeling upset about all the abandoned conversations. I last saw her in person in December 2007. We met at art camp in 1996, and stayed in touch through letters, e-mail, and recently Facebook. The last thing we talked about was Farmville, of all things. I felt guilty for never writing the blog post I promised her!

This is not the post she had in mind. I think she was hoping I would write about the science of synesthesia, but I never got around to read, let alone review, the book she recommended, and I don’t have anything interesting and scientific to add to it. I know she would have liked me sharing the picture that she coloured in, and I had planned to show it as soon as I saw it. I just wish I hadn’t put it off for so long, so that she could have still seen it herself.

My sincere condolences for the loss of your friend, Eva.
And I’m sure your friend would tell you not to feel guilty.

It’s a fascinating condition, Eva. And for years, I thought I didn’t have it – in opposition to your friend who thought everyone had it. I had friends with the colour-number or -letter thing, which always seemed totally weird to me, though interesting.
But recently I realised, after listening to “Dr Karl’s”:http://www.abc.net.au/science/drkarl/default.htm “podcasts”:http://www.bbc.co.uk/podcasts/series/drkarl/, that I probably am a synaesthete, in a minor flavour. When I’m falling asleep, unexpected noises translate consistently into bright flashes of light.
Oh, and unexpected shocks make me shriek like a little girl, but that may be something else.

It’s a lovely poem, Eva – simple enough for me to understand. So sorry to hear about your friend – it’s a perfect tribute. Much more interesting than boring old science.

What an unexpected shock for _you_ and all of Liesbeth’s friends.
I think your post is very touching, and you may well find yourself interested in the subject in the future again, and your reading up will again be your tribute to your friend. When you do, I hope “this webpage”:http://performancetoday.publicradio.org/features/2009/02/synesthesia/ is still around; Oliver Sacks’ books certainly will be, meanwhile. As a musician, you’re bound to become interested one of these days.

That’s a lovely tribute, I’m so sorry for your loss, I am sure your friend would be very touched.

I’m sorry, Eva. I’m glad you decided to write this post as a gift to your friend.

You could think about asking someone who works on synesthesia to guest blog for you.

Condolences, sympathies and best wishes from over here, Eva. You definitely did the right thing by posting this.
I’ve had one such shock in recent (getting less recent by the minute, of course) memory. Leaves a big hole.
R.

I am sorry that you have lost your friend, Eva. I just visited her blog ‘pennenvrucht’. It looks very springlike. Unfortunately, the last spring…

My condolences also. That’s a lovely and interesting post which does its subject proud.

Thanks for the support, everyone. It’s still weird…
I sent the link to this post to her family as well.

My condolences, Eva.
But please don’t blame yourself for not writing the post earlier. While Liesbeth might have LIKED you writing a post on synesthesia, I don’t think she really NEEDED it. She did need your friendship, and that you probably gave as much as you could. And that is the thing that matters in the end.