Top Posts
New on Mixture, writing tips, and other updates
Mixture (the newsletter) got an overhaul
What’s next for easternblot.net?
Twenty years later: My 1999 human genome op-ed
What the zoo can do for you (and...
Book box DIY project
Making science art in Sims 4
Alternative periodic tables
Share Your Sci website is now live!
Launching soon: Share Your Sci
Home Musicians and Scientists Interview with musician and scientist Princess Ojiaku
Musicians and Scientists 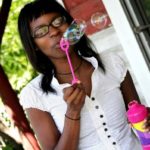 Princess Ojiaku has been interviewing scientist-musicians in the Research Triangle area in North Carolina. She’s also a musician and scientist herself: neuroscience grad student by day, and bassist in a band by night. She plays in the band Pink Flag, where she’s known as Dork Flag. (I found the adorkable photo on their myspace page.) I asked her about science, music, and her own interview series.

Here is part of the interview:

The gig at the Museum of Life and Science in Durham (part of a science of beer event, mentioned in the interview) is on September 16

Being a research volunteer for a study