Top Posts
Mixture (the newsletter) got an overhaul
What’s next for easternblot.net?
Twenty years later: My 1999 human genome op-ed
What the zoo can do for you (and...
Book box DIY project
Making science art in Sims 4
Alternative periodic tables
Share Your Sci website is now live!
Launching soon: Share Your Sci
How science got its start in art: Science...
Home Musicians and Scientists Interview with musician and scientist Eric Olson
Musicians and Scientists 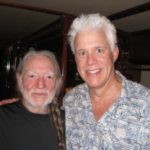 Flipping through the program of the meeting of the Society for Developmental Biology, I saw the same name twice: Eric Olson, of UT Southwestern, was not only giving a talk about his work on microRNAs, but also performing with his band during the closing reception. Checking out his lab website, I also found that some of his work is funded through a Willie Nelson benefit show!

Naturally, I had to catch him for an interview for the scientist/musician project, and since this was also something that was interesting for the Node, I put it there first. You can go read the transcript of the majority of the interview over there, with a show review added. Here is a slightly different audio file (The first part is the same, but there’s an extra comment at the end that is not in the Node post, because it was more relevant for here.)