This year’s Science Online London was probably my favourite so far in terms of the variety in the programme. There were sessions about communicating science using the web, but also practical data-wrangling sessions. Something for everyone. In my session, we talked about offline communities.

As much as I like how Science Online brings together various groups of people who each use the web in their own way to support, do, describe, or promote science, there is a tendency at such events to extrapolate that kind of diversity within the group to beyond the group. That’s not unique to Science Online (London or North Carolina), but also happens at SciBarCamps, Sci Foo, and related events. But none of these events are anything like the real world, and none of those groups are anything like the average “scientific community”. Not everyone uses the web as much as we do, and you can’t just build a community from scratch on the web and expect scientists to join without actually integrating it into their offline life. If you really want to use the web to interact with scientists, you have to occasionally close your laptop and look offline. 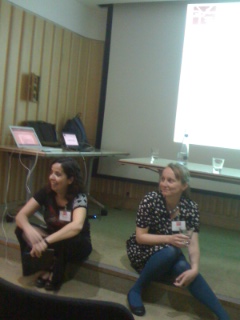 So this year I hosted a breakout session at Science Online, together with Paula Salgado and Jesus Rogel-Salazar: “The importance of offline communities in online networking”
In our breakout session, we gave a few examples of projects where either an offline community moved online, or an online community expanded offline, to point out how offline interaction improved these communities. We also had several people in the audience who had similar experiences, and we had lots of stories to share.

I started with a few examples of offline communities moving online. My first example was the Node, which was suggested by an existing community of developmental biologists, and gets a large fraction of its new users through word of mouth. I also mentioned ArXiv, which started after a group of physicists were already emailing each other preprints of their work, and then decided to centralize that on the web. And the ultimate and most famous example is of course Facebook, which started at Harvard, where people who already knew each other created profiles and then told their friends. Two of these examples (ArXiV and Facebook) were also mentioned that morning in Michael Nielsen’s keynote talk. He mentioned them to emphasize that they started as small groups, and that that is why they worked, and that’s probably also the case for many other successful communities.

Jesus then shared the origins of #ukscitweetup – the casual get-togethers organised by Twitter users who all talk about science, and wanted to meet in person. There is no central committee or assigned group of people who organises these “tweetups”, they just happen whenever people feel like they want to meet offline again. The kind of conversations people have in the pub are very different from the ones they have online. Twitter is very fleeting, and you jump into the middle of conversations, or miss them entirely. In real life, you can spend 15 minutes talking to one person, and cover a lot more than you would have on social media. This seems like a basic concept, but it’s one that’s often forgotten when we get too excited about web 2.0. People do want to meet offline.

Paula had a few other examples of events that crossed over between online and offline, and some of the organisers were in the room to add more info where needed. One example was I’m A Scientist, Get Me Out Of Here. This competition allowed school children to interact with scientists online, and ask them questions via the site, but at the end of the competition there was also an offline meeting, which brought a whole extra dimension to it. For example, the teachers, who had been entirely behind the scenes during the online component, finally had a chance to meet the scientists that their students had been chatting with, and some of the kids also got to meet real scientists in person, which was of course even more exciting than talking to them online. Paula had been a participant in one of the I’m A Scientist events and also really enjoyed meeting everyone in person.

Another example Paula brought up was Science is Vital. Originally conceived online, in a blog post on Jenny Rohn’s blog, the idea expanded not only to an online petition but also to an offline demonstration held to protest a proposed cut in research funding in the UK. The campaign succeeded in stopping the enormous budget cut, but that would not have happened without the combination of online and offline engagement to reach as many people as possible. Science is Vital committee member Shane McCracken, in the audience, said that the petition was signed by many people outside of science as well. They had only reached out to scientists initially, but it spread from there.
Before starting the open discussion, we gave the stage to Mun-Keat Looi for a few minutes, because he had recently done an online/offline project at the Wellcome Trust. The Wellcome Trust invited some of their Twitter followers to visit the Trust and get a behind-the-scenes tour of the building. This not only gave this select group a chance to get to know the WT better, and ask some direct questions, but, vice versa, it also allowed the Trust to get to know some of the people who follow them on Twitter, and find out who they are.

The rest of the hour was spent talking more about offline meetings. Why bother attending a conference about Science Online, for example? Because it’s easier to talk to people and to meet new people at events like this, and it gives you a chance to walk into a session about something that might be new to you – something you’re less likely to do online. We also heard from Katrina James, who organises science tweetups in Bath, and talked about how to find people offline when you’ve only seen their tiny online avatars (if that at all). The group in Bath uses a bird to put on the table so that newcomers can recognize them.

Sara Fletcher works at the Diamond Light Source and shared how she uses both online (Twitter) and offline interaction with users of the synchrotron as well as with members of the public. Last year Science Online attendees had a chance to visit the Diamond Light Source as one of the fringe events. At the moment, the facility is running a writing competition, asking people to submit a short story featuring a synchrotron.

All in all, we had quite a lot of examples of a range of very different projects, all related to communities of scientists using both online and offline tools. Sometimes the offline engagement even gets people to become more active online: friends who come along to tweetups sign up to Twitter after seeing the other people that use it, the Node regularly gets new users who heard about the site through a friend, and many of the people who signed the (online) Science is Vital petition heard about it in offline conversation.

The web is a great way to support scientific communities, but it will never be the only way, and you must remember to also connect offline!

The return of the flask buttons

Not stealing because you’re in it? 🙂

Nice summary of a good breakout session – thanks.

Not stealing because you’re in it? 🙂

Thanks, nice summary of an interesting breakout session.

This is really interesting!! I also agree that people do like to meet offline.

It’s always very exciting to meet someone in real life for the first time when you know each other online. And it’s very true that you can say much more in a few minutes offline than you can using something like Twitter. In contrast, continuing offline relationships online seems like using an obvious and practical way to communicate more often.

Budding journalist does an okay job but sources try to kill the story. https://t.co/88ZDXLUpkP

Reply Retweet Favorite
You know how some scientists are really good at telling the story of their research (in their talks, papers, etc)?… https://t.co/qXxdQ55yMg