Top Posts
Mixture (the newsletter) got an overhaul
What’s next for easternblot.net?
Twenty years later: My 1999 human genome op-ed
What the zoo can do for you (and...
Book box DIY project
Making science art in Sims 4
Alternative periodic tables
Share Your Sci website is now live!
Launching soon: Share Your Sci
How science got its start in art: Science...
Home Science EverywhereScience at home Lab-grown meat. Would I eat that?
Science at homeScience Everywhere

Lab-grown meat. Would I eat that?

It’s something I rarely talk about, but this year is my 10th anniversary of being vegetarian. I don’t know exactly when, because it was a very gradual process. I started slowly phasing out meat from my diet in the late nineties, but lapsed in early 2001, when I was staying in Quebec for four months. Soon after I got back to Holland, though, foot-and-mouth disease hit Europe.
During the 2001 foot-and-mouth disease epidemic, hundreds of thousands of cows were killed in Holland alone. The news showed images of piles of dead cows lying on barricaded farms. Many of them were healthy cows, who were just killed to stop the spread of the disease.
I wasn’t the only one to give up meat entirely that year. After foot-and-mouth disease, followed by an outbreak of swine fever that same year, the sale of meat replacements in Holland increased dramatically. That was probably the only positive economic effect. A large number of farming families lost their business after being forced to have their animals killed, and across Europe the epidemic cost billions.
I stopped eating meat because seeing piles of dead cows on the news made me realize how they are not treated like animals, but like objects. I do still eat fish once in a while, because they don’t have the same “aww” factor and because they are swimming freely until they’re caught, and not squished in the tiniest possible spaces. Other vegetarians have other reasons for not eating meat. Some think it’s healthier, others are concerned about greenhouse gasses, and a few just don’t like meat.
But I love the smell of barbecue.
Contrary to what some people believe about vegetarians, I don’t dislike meat. I love it. The crispy skin on a chicken leg, the juicy inside of a steak that’s _just_ right. Bacon. I just choose to not eat any of those things anymore, because I don’t agree with the way chickens, cows, and pigs are kept and killed just so we can enjoy their meat.

That moral decision will once in a while bring up the hypothetical question whether I would eat test tube meat. I don’t know. Would I? Ethically, yes. None of my arguments for denying myself meat apply to test tube meat. Okay, there is a source animal somewhere from which the starting cells have to be taken, but that is no different from the many cell biology experiments I did in the lab. If I can do tissue culture work – and I have done a lot of that – then I can eat test tube meat.

But test tubes and petri dishes make me think of research, not of food. I am picturing meat soaked in DMEM. Would I eat that? I don’t know.
Until very recently, it didn’t matter. It was just a hypothetical question, but now test tube meat has become a reality. Mark Post of the University of Maastricht has been optimizing the process of growing meat in the lab, and he will unveil the first lab-grown burger later this year. 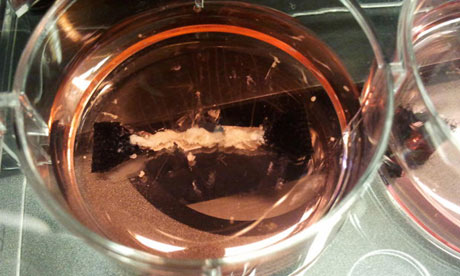 Meat in a petri dish. (Image: Mark Post, Maastricht University.)
The research leading up to it has cost about £200,000, reports the Guardian, and was funded by an anonymous individual donor. It’s a lot for a burger, as the newspaper rightly points out, but it’s a reasonable amount of money for a research project. And if you compare it to the billions that foot-and-mouth disease cost, it’s a bargain.
“If lab-grown meat mimics farmed meat perfectly – and Post admits it may not – the meat could become a premium product just as free range and organic items have.
He said that in conversations with the Dutch Society of Vegetarians, the chairman estimated half its members would start to eat meat if he could guarantee that it cost fewer animal lives.”
Half would, half wouldn’t, and I’m still on the fence. Would I eat lab-grown meat? Would you?

For me it would very much depend on how it’s grown and, specifically, how many antibiotics are used. Beyond that I’d definitely give it a try to see how the taste and texture are. Lab-grown meat couldn’t possibly be worse than late 80s/early 90s soy-based meat replacement products… oh the horror!
(ex-vegetarian, now try to eat free-range/grass-fed meat as much as possible)

I hadn’t even thought about the antibiotics. I guess they’d need pen/strep in the medium, like other tissue culture?

A chef friend of mine is appalled by the story. I’m ambivalent, so far, from a diet point of view. From a science point of view I think it’s a great story. If we can reduce the energy required to produce meat, that is a good thing.

I stopped eating meat because seeing piles of dead cows on the news made me realize how they are not treated like animals, but like objects.

I think it’d be more accurate to suggest that this is an effect of how the media portrays these disasters. Thinking of the South Asian tsunami a few years ago, you could just tell that the TV companies really wanted to show the piles of bodies littering beaches for the shock value, but ultimately had to stop themselves on the grounds of decency. I’m not trying to be provocative here, I feel that the media has been forced to draw a clear taxonomic line in the macabre images they want to shock and titillate us with.

I do still eat fish once in a while, because they don’t have the same “aww” factor and because they are swimming freely until they’re caught, and not squished in the tiniest possible spaces.

Never seen a tin of sardines? :p
(Disclaimer: I spent time doing work experience with a vet as a school boy, including abattoir visits. I’m still a happy meat eater)

What about the FBS in the medium?

Mike, this is, of course, the short version. It took me several years to go from meat to no meat, and it wasn’t *just* the TV images, but just like that one shot makes for a good few seconds of news footage, that story makes for a good summary of why I don’t eat meat, instead of a 50 page thesis.
And anyway, I don’t normally talk about it, and even often forget to tell people. But it was a hook for a blogpost that could also have been “look at this story. They make meat in labs now.”
Trust me, I know all about sensationalizing a news story. 😉

Viktor, good question. People would still refuse to eat it, I suppose, if it involves FBS. Perhaps artificial FBS would be good enough to grow meat in? They should definitely consider that before mass production.
I wrote about FBS before, in my Squishy Cow post a few years ago.

Doesn’t anybody who regularly consumes meat already ingest plenty of (denatured – depending on the extent of cooking) serum in cuts from animals likely reared on diets containing copious antibiotics? As such, this ‘_in vitro_ meat’ shouldn’t be too much of an issue. Interesting how the ‘Yuck factor’ is immediately invoked, perhaps by people who don’t consider what goes into their sausages already.

I think Viktor was referring to how vegetarians (who normally wouldn’t consume animal serum) would respond to meat grown in medium containing FBS.

Sorry Eva, I wasn’t trying to pick on your reasons for veggie-ism (hope you didn’t feel too attacked). I was picking on the sensationalist, morally repugnant media though. Grrrr.

I guess so. And your personal post comes at it from a vegetarian’s viewpoint. But I think your final _’Would you?’_ applies also to many meat-eaters who might find (the notion of) this, err, _unpalatable_.

Mouth-feel is a critical test — do they have the texture right? If you can grow in some fat layers, this might be a good starting material for Sichuan twice-cooked pork. I’d try a slab, but I don’t think I’m yet ready to give up the family habit of purchasing a half a pig from a nearby farmer once a year. Still, for the sake of consuming lower-energy meat I’d have to consider training myself to enjoy organ-free piggies.

Yeah, I think there’s a reason they’re announcing that they’re close to “hamburgers” and not “steak”. It probably doesn’t quite have a familiar texture, but for hamburgers it doesn’t matter as much.

Lab-grown meat can be used for distant space traveling or something like that but how can one eat synthetic meat at such huge cost, when original meat is available at low cost in ordinary settings.

Reminds me of a conversation I had with a veggie mate, regarding whether he would eat black pudding from a non-lethally bled pig (similar to the Masai bleeding cows…)
For me – if it tasted good enough, and as Jon notes, has the right texture, I don’t think I’d have an ethical issue. But part of the reason I stopped being veggie after 15y was that I started to be able to afford ‘proper’ meat – with fat, gristle, flavour and a known (usually local, always outdoors) origin. I don’t think I’d want to go for something homogeneous, as this sounds. A big part of the pleasure of meat for me lies in its huge variety, from the most expensive to the cheapest cuts, all of which can be delicious if you cook them right.
OK, I’m getting hungry now…

As Usman pointed out, right now it is very cheap to grow animals vs test-tube meat, production would have to be hugely industrial (think oil refinery style) to get to the economies of scale needed. And the texture needs serious work, if you look at stuff like Quorn it’s OK-ish for burgers and mince but that’s about it.
Also there is the recurrent issue of prions, a recent paper in everyone favourite science weekly found them in many fungi (here) so we can assume they will be found in cultured mammalian cells as well.
On the positive, it would be interesting to see start-ups developing competing cell lines, maybe you could put in a custom order in for a sirloin steak with a hint of lamb!
Wow I’m hungry now.