FuturePub is a relatively new event, hosted by Overleaf, that combines a meetup with short talks from people working on the cutting edge of scientific publishing. It has already become such a staple of the London science tech/publishing scene that it was hard to believe that Tuesday’s sold-out event at the British Library was only their fourth meeting.

The talks themselves were all very short – another thing that Futurepub does right. A few presenters used their allotted time to do a live demo, which didn’t always work as planned, but we saw enough to get an idea of what they were showing.

Ian Mulvaney demonstrated eLife Lens, which I had heard about but never had a chance to explore, so that brought me up to speed. It’s a useful tool that allows you to view images from scientific articles directly next to the relevant text, rather than wherever the publisher decided to place them. Christopher Rabotin showed what’s new at article recommendation service Sparrho (they have an API now). Kaveh Bazargan impressed the room with his instant XML-to-PDF conversion service. Keren Limor-Waisberg introduced The Scientific Literacy Tool, which lets you look up and explore the more complicated terms in scientific (news) articles without leaving the page. And finally, Winston Li showed his 3rd year uni project: Git integration with Overleaf.

All the talks were also livestreamed via Google Hangout, and you can watch them now on YouTube. (The quality is not as good as the real event, but you get the idea.)

After the talks and some post-talk drinks, the group moved to the pub for London Open Drinks, another London science publishing networking event that – together with Scholarly Social – joined forces with FuturePub that night. The combined effort made for a very productive evening.

Despite not being in a very social mood that day, I ran into lots of familiar faces and met a few new people, all of whom I only had a brief chat with. Like the talks, all my conversations were brief, but that’s okay. These sort of events are perfect for a quick catch-up, and you can always follow up later – both with people and with things you learned. 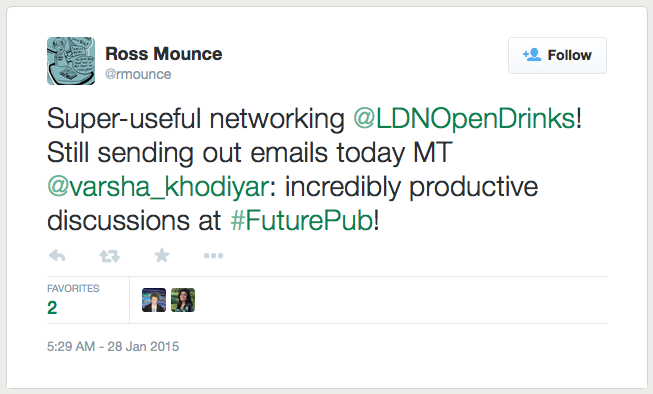 The next Futurepub event is on May 19, at a yet to be determined location (but again in London). The eventbrite page is already up, so you can reserve a spot. It’s free, but there is always limited seating, and this week’s event was packed and sold out!

The Music and Science survey