Top Posts
Mixture (the newsletter) got an overhaul
What’s next for easternblot.net?
Twenty years later: My 1999 human genome op-ed
What the zoo can do for you (and...
Book box DIY project
Making science art in Sims 4
Alternative periodic tables
Share Your Sci website is now live!
Launching soon: Share Your Sci
How science got its start in art: Science...
Home Science in Art & CultureBooks Book review: Keeping Women in Science
BooksScience CommunicationScience life and careers 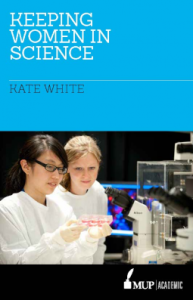 This book is a quite academic report of a study carried out in an Australian research institute. I’m starting my review with that because I was expecting the book to be broader than that, and I think my disappointment that it was so specific really shaped how I felt about it.

The title, “Keeping Women in Science” sounds like it will cover all women and all science. In fact, the book is a report of a particular study at the Florey Institute of Neuroscience and Mental Health in Melbourne, Australia.

The author, Kate White, is a researcher on gender and higher education, and this book is the result of a study she ran to investigate the gender balance at two campuses of the Florey Institute – one academic and and one clinical.

Many of the issues that came up in her research were quite specific to Australia and to these institutes. For example, one factor that White identified as causing women to leave research was a specific requirement for an Australian research grant that only looked at work from the past three years – putting women who took maternity leave at an unfair disadvantage. While similar issues undoubtedly occur around the world, there isn’t much of a broader overview in Keeping Women in Science, and I often wondered how the described situations compared to other fields, countries, or institutes. It was briefly mentioned, but not in detail.

The title also suggests an undertone of “every PhD graduate should work in academia”, and I did  recognize that in the book. It also has to do with the narrow focus of the book: its purpose is to find out how to retain women at this particular institute, in this particular country. It’s not meant to broadly discuss science careers, and I think that’s what I was hoping it would do.

Although White briefly mentions that there were interviewees who indicated that they were looking for careers outside of research, the general feeling conveyed in the book is that leaving academia is to be avoided. Somewhat ironically, though, one of the arguments in the book is that science needs more women because men often leave academia to work in higher paid jobs in industry! To me, that reads as if men leave academia because they want to take their skills elsewhere, while women leave because they are forced out. As a woman who purposely left academia to take her skills elsewhere, I always cringe at the assumption that all women who left research were somehow disadvantaged.

I’m aware that I wasn’t able to leave my own background at the door when I read this book, and my review is biased. However, even though it wasn’t for me, this case study from Melbourne might be a useful read for researchers studying gender or science culture, or for administrators of other research institutes or of funding agencies. It analyses what these particular institutes did right and wrong, and it has practical advice for research institutes that want to address their own gender balance.

Have you been listening to music during this pandemic? If so, you’re not alone. A study found that many have found… https://t.co/qRt87FiQAO

Reply Retweet Favorite
Mara are on the March Mammal Madness bracket! If you've ever been at Whipsnade Zoo in England, they're the funny li… https://t.co/LARfgR3wbT

Reply Retweet Favorite
In case you missed it (and you did, because I posted it at midnight on a Friday), there's a new Mixture up! My subs… https://t.co/hpGxG6mz6m

Reply Retweet Favorite
There, I said it. Scientists have an odd relationship with art. https://t.co/B7AFBE3FqW

Reply Retweet Favorite
I'm worrying that people will hate me because I make some generalisations about scientists in the next Mixture. So… https://t.co/e0Vm0kEukD