Top Posts
New on Mixture, writing tips, and other updates
Mixture (the newsletter) got an overhaul
What’s next for easternblot.net?
Twenty years later: My 1999 human genome op-ed
What the zoo can do for you (and...
Book box DIY project
Making science art in Sims 4
Alternative periodic tables
Share Your Sci website is now live!
Launching soon: Share Your Sci
Home Science in Art & CultureMusic Science/music prize for survey draw
MusicMusicians and Scientists

I promised an update about the prize pack you can win in the survey draw if you participate in the science and music survey. Now that most of the items are in, I thought I’d show you what’s at stake: 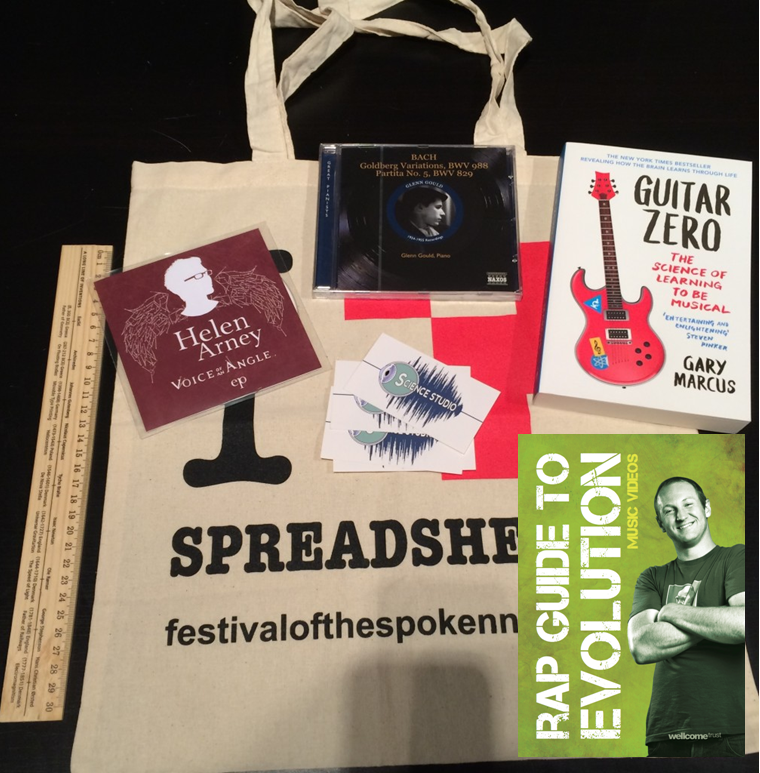 One random participant in the survey will win a music and science-themed prize pack, consisting of:

-Voice of an Angle EP by Helen Arney, with scientifically accurate songs about love, the sun, and more.

-Guitar Zero, by Gary Marcus. What happens when a scientist decides to learn guitar? I previously reviewed this book here.

-Bach’s Goldberg Variations, played by Glenn Gould. The Goldberg variations are often used as example of Bach’s use of mathematics in composing.

-Festival of the Spoken Nerd tote bag. This British comedy show about science has won lots of praise, and so will you with this awesome bag!

-Ruler of inventors. Featuring at least one “musicsci” (Einstein) and a lot of other scientists and inventors.

Prizes were donated by Baba Brinkman (DVD), Helen Arney (EP and tote bag), Oneworld (Guitar Zero), Science Studio (stickers) and F1000 (Glenn Gould CD) so make sure to visit their sites and see what they do when they’re not donating prizes to surveys.

And don’t forget to take the survey for a chance at winning!

(If you’ve previously taken the survey, and don’t remember whether you opted in for the prize pack, please do NOT retake it, but let me know, and I will sort it out for you.)