Top Posts
Mixture (the newsletter) got an overhaul
What’s next for easternblot.net?
Twenty years later: My 1999 human genome op-ed
What the zoo can do for you (and...
Book box DIY project
Making science art in Sims 4
Alternative periodic tables
Share Your Sci website is now live!
Launching soon: Share Your Sci
How science got its start in art: Science...
Home Science EverywhereCreative & design Spontaneous Paleontology – Lego video for Art Assignment
Creative & designGames & toysMusic

The Art Assignment is a YouTube show on PBS Digital Studios, hosted by Sarah Urist Green, which features a different artist each episode. The artists show how they work, and challenge viewers to carry out a specific art assignment.

I’ve been following The Art Assignment ever since it launched, but never got around to participating until now. The latest guest was Ryan Lott of Son Lux, who provided viewers with a piece of music he composed, and invited everyone to collaborate with him by responding to the music in some way.

I initially considered adding a layer of music to it, or re-interpreting the music on violin, but I was having a hard time with it because it’s not in a style I’m used to. Then I decided to instead interpret it using my new favourite medium of Lego-scientists-stop-motion.

It was a different process from how I normally make these videos. Normally I start with an idea, make the video, and then spend a long time searching free music libraries for something that matches the mood of the video.

Now I started with the music and the mood, and tried to make a video around it.

The music sounds a bit sinister and mysterious, so I immediately thought of using the dinosaur skeleton. My initial idea was to have the Lego scientist(s) assemble the dino, which then comes to live, but I quickly realized that the “bones” on the floor would start to wiggle while I moved the scientist figure around, so I changed it to an even more magical scenario, in which the dino doesn’t only come to life after it’s assembled, but assembles itself. It was a lot easier than my initial plan, and it works well with the music.

To get the music to line up with the video, I had to cut a few segments. The most important thing I did was cut the beginning of the music, so that the theme kicks in when the auto-assembly starts at 0.11.

I’m happy with how it turned out – and with this reaction on Twitter from Son Lux! 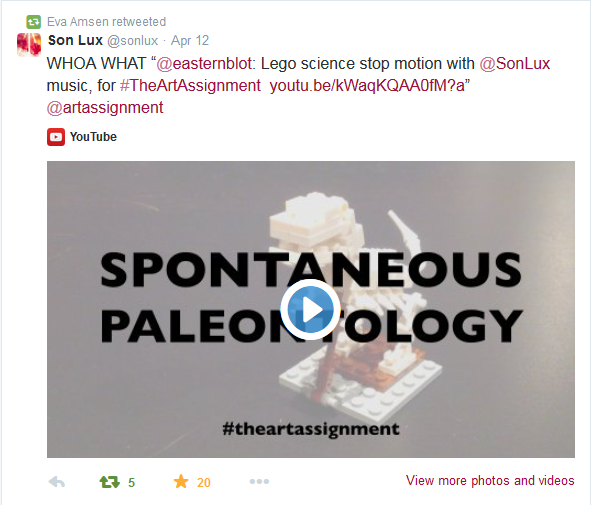 P.S. If you like music an science, don’t forget to take the survey, which closes end of this month!

Science books on T-shirts and bags!

Reply Retweet Favorite
Because of this (the Netherlands not allowing the AstraZeneca vaccin for older adults) and a shortage of Pfizer vac… https://t.co/nTj2uBXQjA