Silicon Valley is a comedy about a start-up company, Pied Piper, that does all the things start-up companies do. They have engineers, a CEO and funders. There are competitors, conventions, and lots of cameos by famous tech faces from the real Silicon Valley.

During most of the episodes, I tend to get confused by some of the details. They’re building a what? Why are they talking to these people? What is happening now? The show is fast-paced, and full of tech jargon and entrepreneurial chat that I don’t always immediately catch. It’s usually not relevant – I get the jokes even without understanding precisely how everything works. 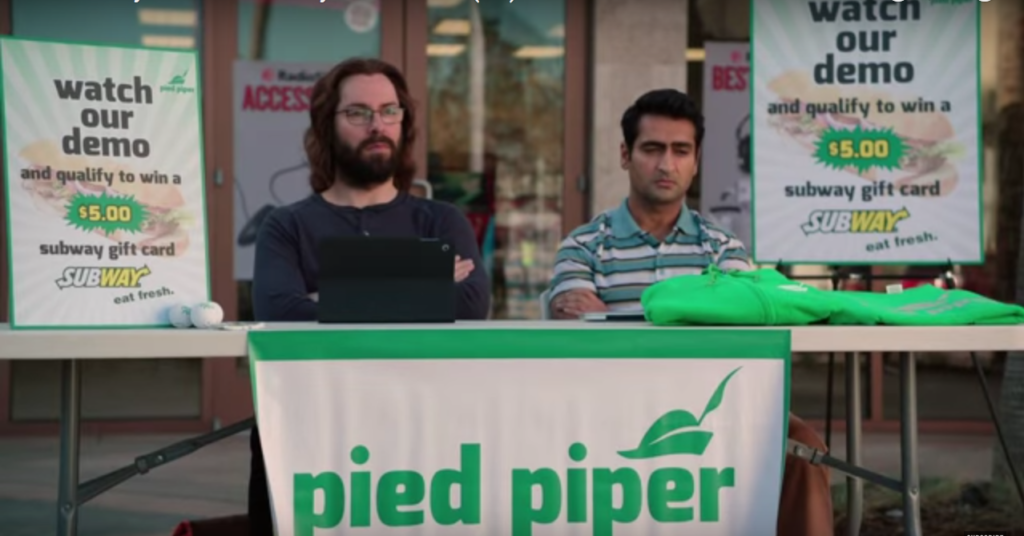 I have sat at similar tables. I know what this feels like.

But last week’s episode, the penultimate episode of Season 3, I understood exactly what was going on. It was an episode about outreach!  I may not know much about server stacks or peer-to-peer technology, but I do know how to do outreach for new and complicated projects.

In this episode, the Pied Piper company is celebrating that they reached over half a million downloads of their product. Yay!

Unfortunately, most of the people who download their app don’t actually use it. They had only tested their technically impressive thing on engineers, who understood it, but not on regular users, who were supposed to become their clients.

To figure out how non-engineers perceived the Pied Piper app, they did some market research, and – after the CEO crashed the market research session – discovered that the problem was that people didn’t understand what the app could actually do. Once it was explained to them in excruciating detail, they liked it. One woman, Bernice, immediately turned into their biggest fan once she understood the app.

Realising that the problem was a lack of understanding of what their product could do, the team set out to do some outreach to try to educate people. They set up demo booths at conferences, manned by two of the engineers, and gave talks at what looked like a local community college. It didn’t help. People still didn’t use the app.

In the next episode, a coincidental event and a bit of good luck manages to get the company out of their predicament just before the season ends, because it is, after all, a fictional TV show. In the real world, they wouldn’t have had a random stroke of luck. They would have needed to do their outreach right.

My outreach advice for Pied Piper:

Nobody is interested in the demonstrations that the engineers give, because they’re still stuck with the same problem: As engineers, they’re way too deep into the tech specs to know how to pitch the app properly to someone who doesn’t know the details. They need to find someone who understands what they are doing, but who also knows how to distill that into short take-home messages, work it into an elevator pitch, and create a more relevant demo.

To their credit, they do involve marketing experts, but only to build a terrible “Clippy”-inspired digital assistant for their platform – not to look at the company’s core communication issues.

2. Collaborate with a business or organisation that has a large customer base that needs the product

This might not have been on the table for these guys because they had to grow customers quickly, but a good way to get a new and confusing tool in the hands of people who never used it before is to combine it with something they do know. In the case of Pied Piper file sharing, they might want to find, as possible collaborator, a website where people upload large amounts of data (music? images?) but that has limited storage space or issues with slow downloads.

The collaborator, let’s call it ThingAMaShare, could then offer their users a Pied Piper account that ties into their ThingAMaShare account and handles the storage and downloads. That way a whole existing audience is encouraged to use Pied Piper for something they’re already doing, ThingAMaShare’s problems are solved, and Pied Piper would get name recognition as “that thing that ThingAMaShare uses”.

This was to me the most obvious thing that the guys should have done in this episode. Bernice is such a big fan of Pied Piper after finally understanding the concept, she even shows up to the demo talks! Bernice is already using Pied Piper regularly, and has probably gotten into a particular routine with it. What does she use it for? How does she describe the app, in her own words? Who is she talking to about it? What do those people tell her? Get in touch with Bernice, and find out! Then use that information to target potential users more specifically.

Like their potential customers, I may not always get the tech details of the Pied Piper premise, but at least I understand their outreach issues!

Budding journalist does an okay job but sources try to kill the story. https://t.co/88ZDXLUpkP

Reply Retweet Favorite
You know how some scientists are really good at telling the story of their research (in their talks, papers, etc)?… https://t.co/qXxdQ55yMg