Top Posts
New on Mixture, writing tips, and other updates
Mixture (the newsletter) got an overhaul
What’s next for easternblot.net?
Twenty years later: My 1999 human genome op-ed
What the zoo can do for you (and...
Book box DIY project
Making science art in Sims 4
Alternative periodic tables
Share Your Sci website is now live!
Launching soon: Share Your Sci
Home Science in Art & CultureBooks Book Review: The Scientific Secrets of Doctor Who
BooksScience in Art & CultureScience on screen

Book Review: The Scientific Secrets of Doctor Who 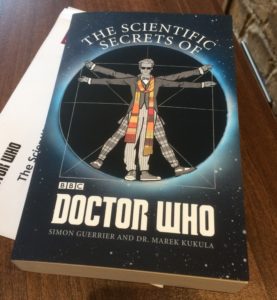 The Scientific Secrets of Doctor Who

I didn’t start watching Doctor Who until the rebooted series in 2005. I missed the original episodes because I wasn’t born until well into the era of the Fourth Doctor, and because I spent the rest of the initial series in a country that didn’t care about this strange Time Lord in his blue box.

I still haven’t seen the older episodes, but that didn’t stop me from enjoying or understanding The Scientific Secrets of Doctor Who

. To understand the book, you don’t need to know every episode, as long as you are aware of the general concept of the show, in which an Earth-loving alien Doctor travels with companions through time and space.

The book is divided into three section that address the three different story aspects you encounter in the TV show: Space, time, and humanity. Each section has five chapters that touch on scientific ideas related to concepts in Doctor Who, and each of these chapters is preceded by an original Doctor Who story, covering all incarnations of the Doctor and many of his companions. The fictional stories are written by fifteen guest authors, and are loosely related to the topics in the non-fiction chapters written by Doctor Who novelist Simon Guerrier and astronomer Dr. Marek Kukula.

The Scientific Secrets of Doctor Who does not try to impose scientific explanations for the unlikely events shown on screen. Instead, it uses the framework of the world of Doctor Who to discuss related scientific topics. That’s not just limited to referring things from within the show (e.g. what does time travel have to do with worm holes?) but it also highlights the progress of scientific discovery in the context of the history of Doctor Who. New scientific discoveries and world events inspired the writers directly, but also indirectly, as our collective knowledge of the world has changed a lot in the time that Doctor Who has been on TV. The Doctor was already at the end of his second incarnation when we put people on the moon in 1969!

That, for me, was the best part of the book: Being made to consider that this show was on the air before the moon landing, before the first Earth Day celebration, before the Voyager probes, before the end of the Cold War, before large scale DNA sequencing, and before CD players, tablets and smartphones. We’ve been fantasizing about unknown worlds for so long, it can be easy to forget how much we are actually learning about our own.

As a very broad overview of scientific concepts ranging from multiverses to regeneration, the book only briefly touches on certain topics, but The Scientific Secrets of Doctor Who is not a book to learn in-depth science from. It’s a book for people who really like Doctor Who, and who want some real-world context for the show. For me, it also highlighted some episodes of the older series that I want to check out, and yes, I’m fully aware that I now have access to on-demand TV-watching technology that didn’t yet exist when those episodes aired.