Top Posts
Mixture (the newsletter) got an overhaul
What’s next for easternblot.net?
Twenty years later: My 1999 human genome op-ed
What the zoo can do for you (and...
Book box DIY project
Making science art in Sims 4
Alternative periodic tables
Share Your Sci website is now live!
Launching soon: Share Your Sci
How science got its start in art: Science...
Home Science Communication How to find images for your science blog – Part 1
Science CommunicationWriting, images, and storytelling

How to find images for your science blog – Part 1

This is the first part of a two-part blog post on where and how to find images for (science) blogs. A lot of these tips are easily adaptable for other types of blog posts, or for other purposes (like YouTube videos), but some are a bit science-specific.

There are four ways to get images for your science blog.

I’ll go into a bit more detail on each of them, but I’ll have to split it over more than one post. This post covers only the first method. Part 2 will include method 2, 3 and 4.

If you go to Google and do an image search, or if you come across an image somewhere else online, you cannot simply take that image and repost it on your own site. You have to first make sure that the image has the right permissions.

For an image to be fair game for reposting on your blog, one of the following needs to be the case:

1. The image is in the public domain.

2. The image is licensed for reuse under a Creative Commons license.

Which license you are allowed to use depends on your blog and how you use the image:

Combinations of these licenses are also possible.

All right, now you know which images you can freely use without asking for additional permission, but where do you find images with the proper license?

There are a number of places you could start looking – it depends a bit on what you’re after. I have a few favourite sources of images. I’m going to do the same search (“raccoon”)  in all four so that you can see the differences and similarities in the types of results and enjoy a plethora of raccoon pictures at the same time.

When you do a Google image search, you can restrict your search results to only show you pictures that you are allowed to use without permission.

Click “search tools” and then the drop-down menu “usage rights”. I selected “labeled for reuse” here, and found this raccoon. The big downside of Google’s image search is that it doesn’t always explain why the image is “labeled for resuse”. Is it in the public domain? Is it on a blog that someone put a CC-BY license on? I try to find out from the source, and often stick to search results that are very clear about permissions, like Flickr, Pixabay,  or Wikimedia Commons (all discussed below). Most of the raccoon images in my search result came from those sites, but this one is from another page, a free stock photo site which also lists the origin. It’s an image from a US government agency, which had made it available in the public domain, so no credit needed here. 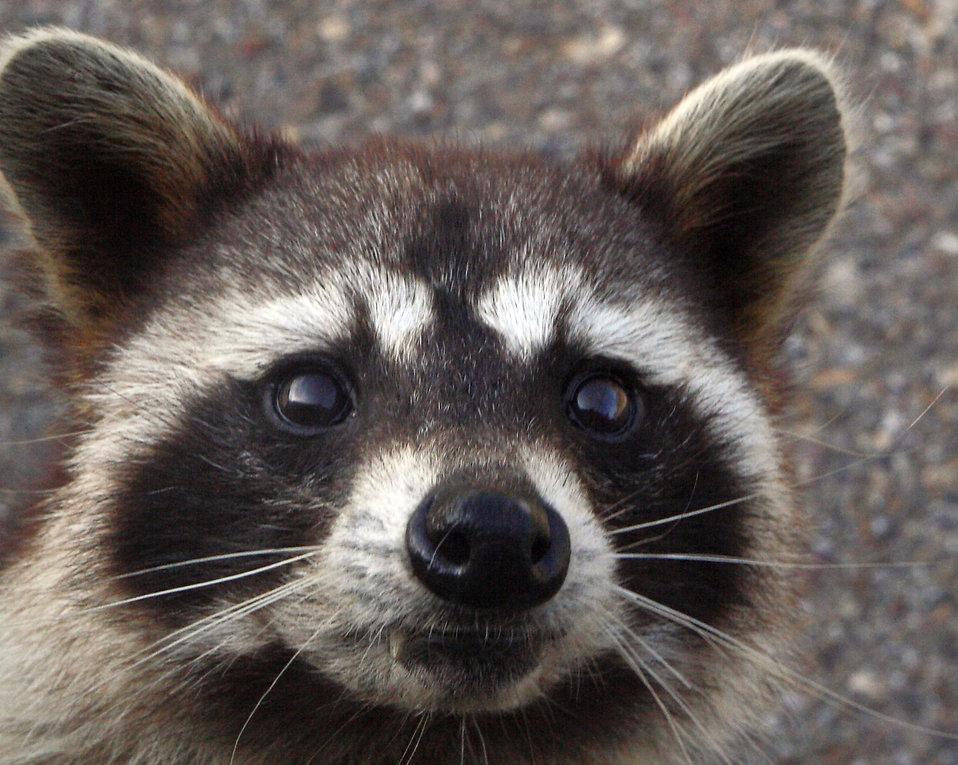 Like on Google, you can search Flickr images for specific licenses. I’m searching for “all creative commons” here 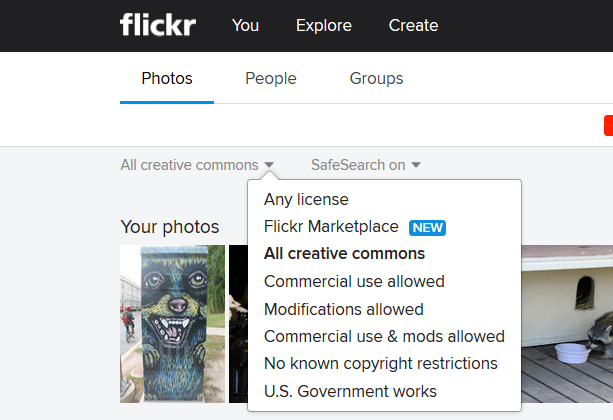 Flickr shows me my own photos first, but that’s a topic for a future post, so I’m not looking at those. Here’s someone else’s cute raccoon. I can embed images directly from Flickr, but I don’t want to rely on Flickr to show my pictures, so I reuploaded it. I usually credit Flickr photos by name of the author, and a link to the photo on their Flickr page (linked both in text and through the image itself). 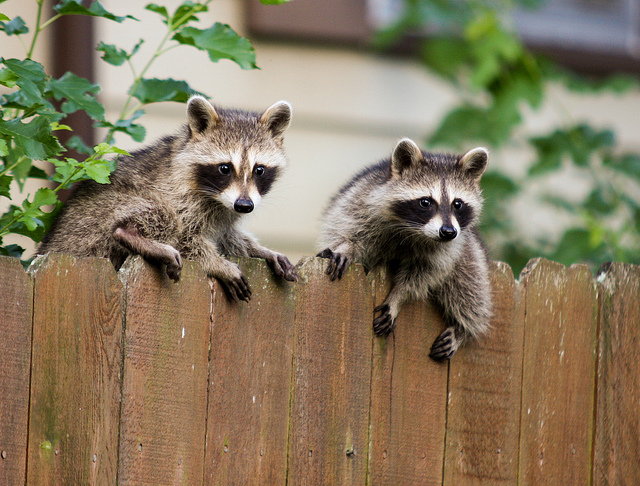 Wikimedia Commons images are uploaded by volunteers, and they should include information about how to cite the source of each image. Here’s what it looks like for the raccoon below: 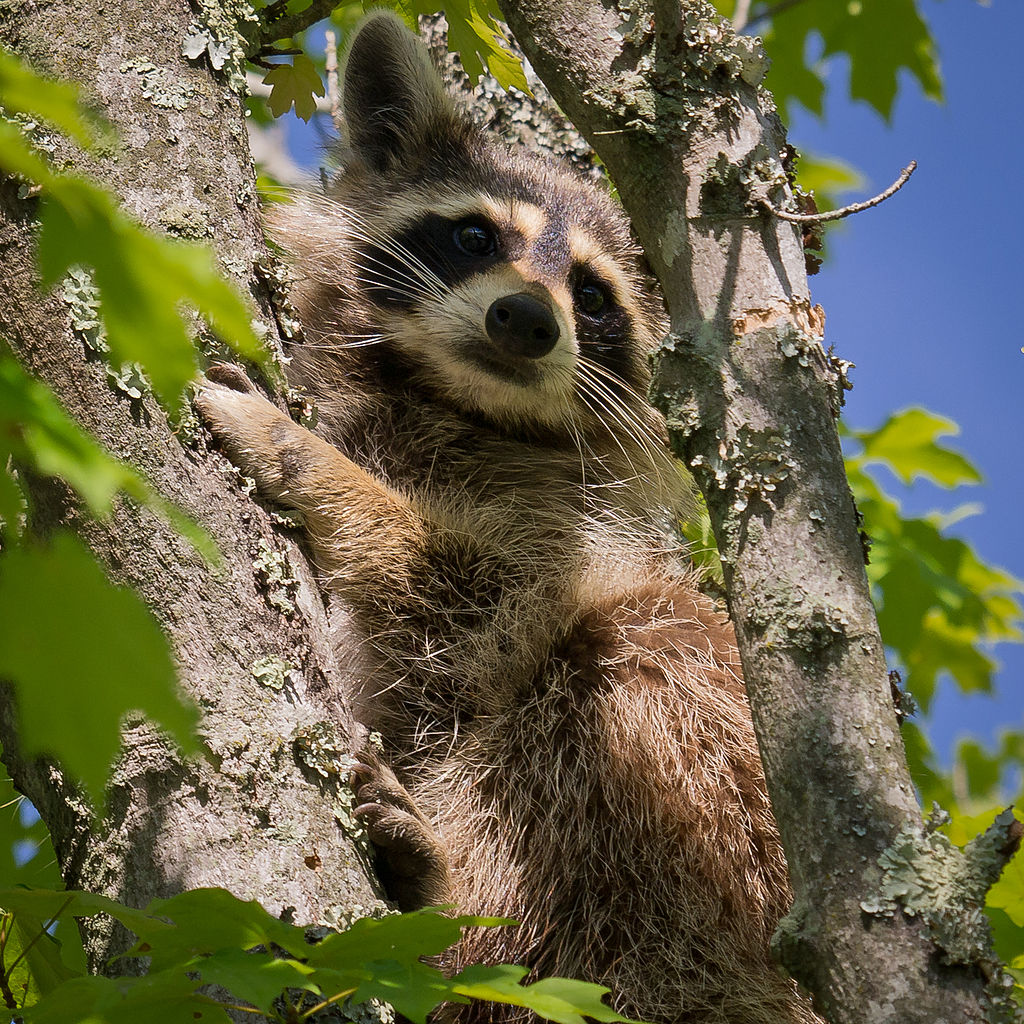 There were a LOT of other great raccoon images on Wikimedia Commons, but many had an SA license, and as I described above, I try to avoid those because my blog itself doesn’t have an SA license.

In general,Wikimedia Commons is the best source for animal pictures, because they tend to bring up the correct animal, link to more information, and sort the images by habitat.

Pixabay has images from various other sources, both images that are free, as well as images you can buy from sponsor sites. This raccoon was a CC0 image so doesn’t need any credit: 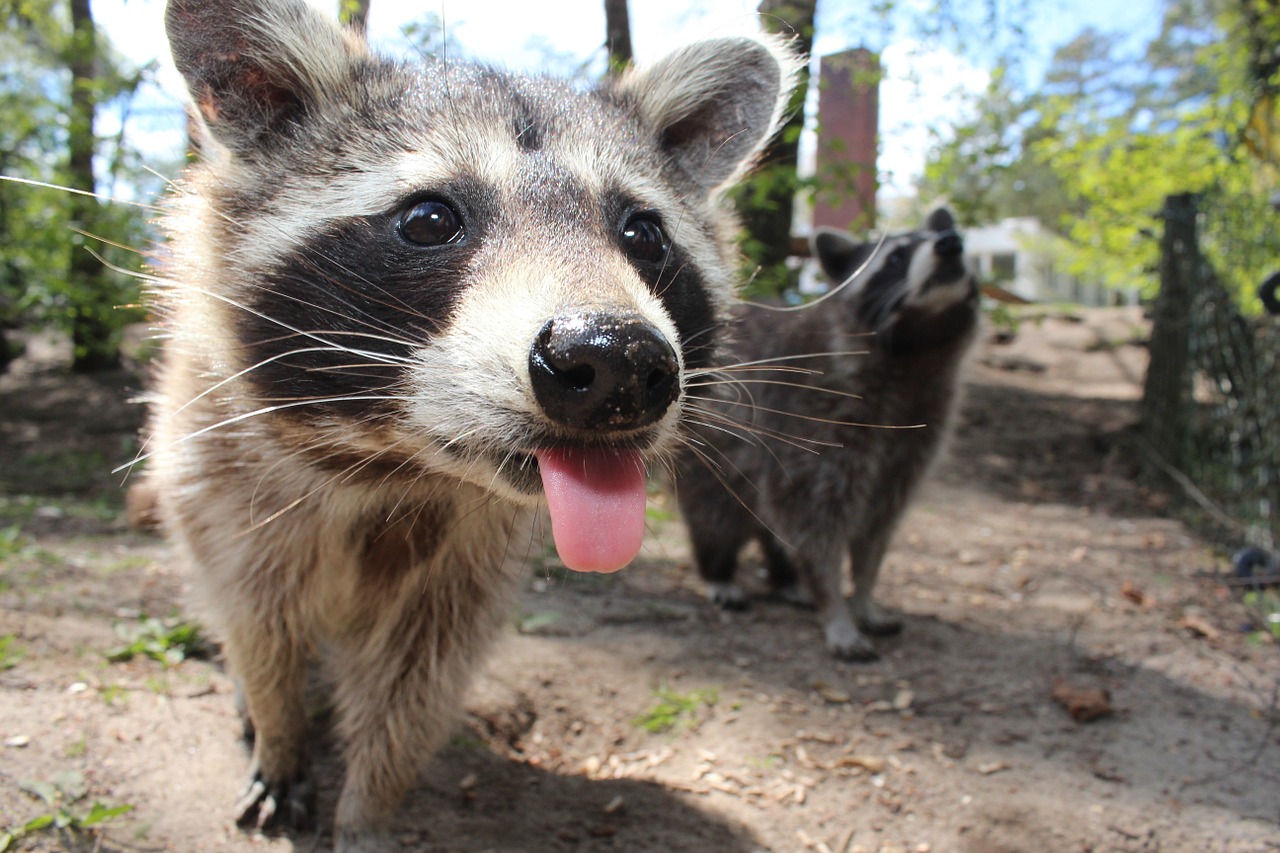 Wellcome is a great source of images related to the biomedical sciences. Not all of their images are free to use. You can use all of the historic ones and the ones that are labeled a CC-BY. For their collection of rights-managed images, you have to pay a license fee on hi-res images (more on that in part 2 of this series of posts) or you can use the low-resolution version under a CC-BY-NC-ND license. Since I have ads on this blog, I’m not sure if I qualify for the CC-BY-NC-ND images, so I’ll look through the search results for the public domain or CC-BY images only. There were only three “raccoon” images, all for “raccoon dogs” and only one that was CC-BY. It’s a weird little netsuke figurine from Japan.  Because it was CC-BY, I used the credit as described on their page. 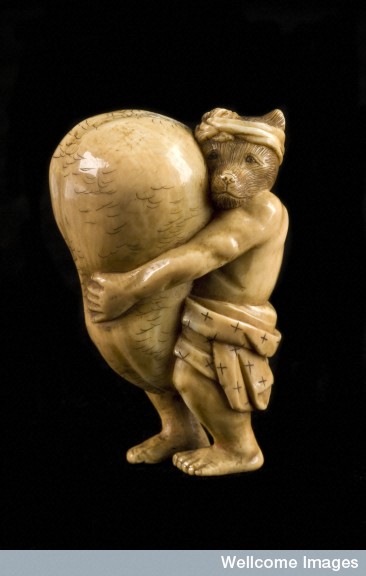 When I saved this image, a lot of meta information was carried along with it, and (free) Wellcome Images always come with that little bar at the bottom.

Wellcome Images is not very user friendly compared to the other sites, and a very specialised source. It’s not great for raccoon images, obviously, but it has lots of medical and biomedical images, including many historical ones.

Figshare has two sources of images: those uploaded directly by researchers, or those that appeared in journals that are affiliated with Figshare. Despite their name, there are lots of different file types here, not just “figures”, so you have to restrict your search result to “images”, like this: 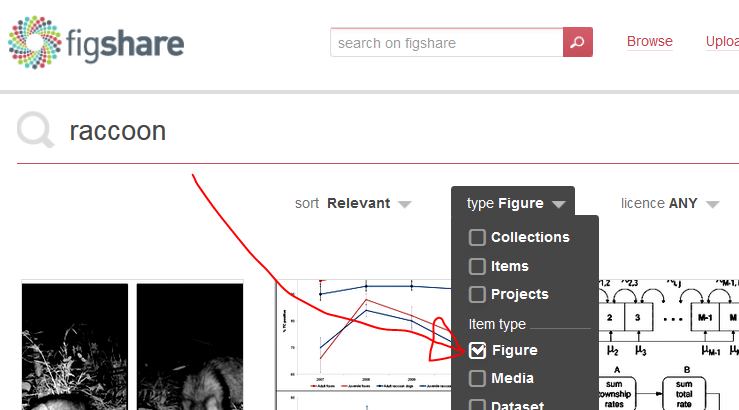 Most of the image results will be graphs, because they’re figures from papers, but here’s an interesting raccoon picture. The image information suggests that it’s associated with an article in PLOS Biology, and that it’s CC-BY, so I’m going to need to credit the source (in this case, the article.) I can click “cite” on the Figshare page to get a citation, but because I couldn’t figure out who the authors were, I clicked through to the article. The whole article appears to be an editorial or a highlight, without any author names, so I just took the credit they provided. It looks like the image was perhaps made in-house by PLOS, so there are no authors to cite. (This shows how confusing it can get when you need to credit an image!) 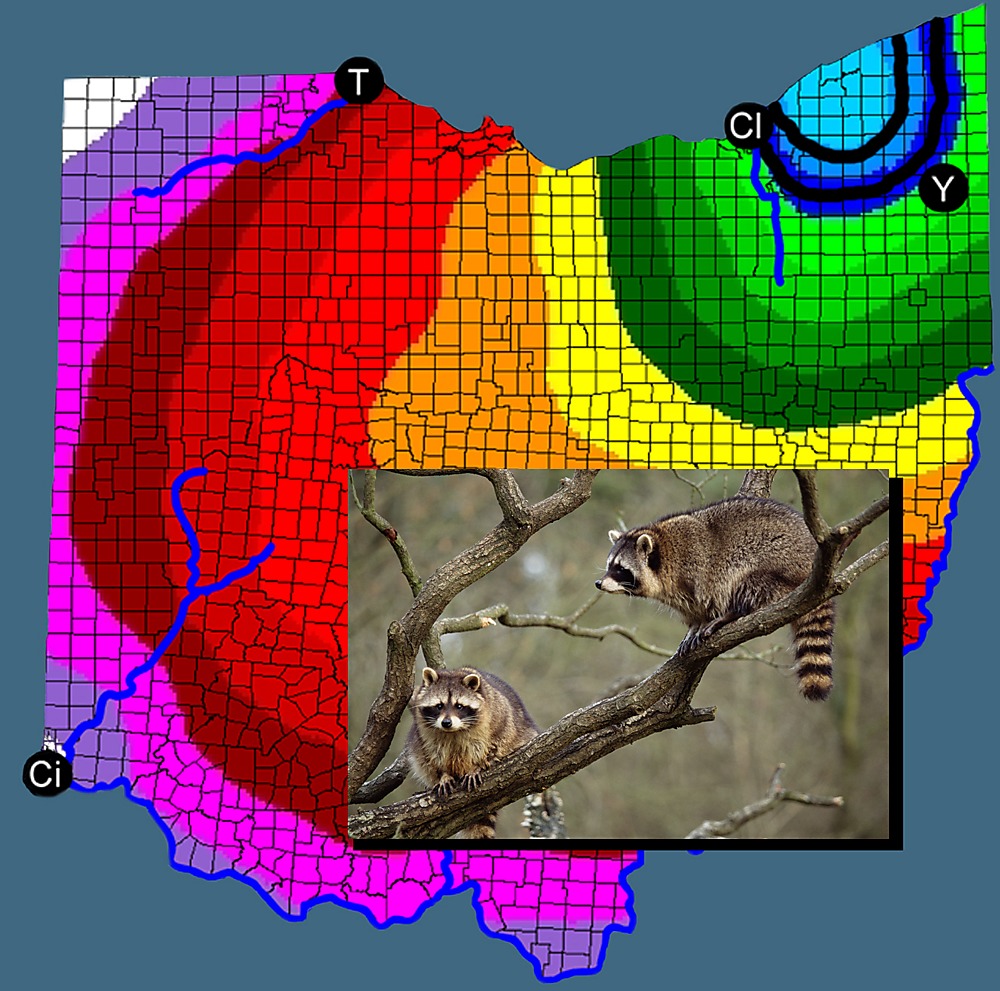 NASA images should also pop up in Google image searches or Flickr searches, but I wanted to highlight them separately because they’re a huge source of space images that are mostly free to use on science blogs. The full multimedia guidelines for NASA are on their website, with links to their various galleries. Not a great place for raccoon images, but such a vast source of information that I still found one!

A search for “raccoon” in the NASA media galleries turned up an image of Amelia Earhart wearing a raccoon fur coat. It’s also in their Flickr albums, and there it’s easy to find the restrictions: “no known restrictions” means you can use it anywhere with no explicit credit (because it’s a historic image).

That’s it for part 1! Part 2 will include a few ways to make your own images, and some tips on asking for permission or buying images.

How to find images for your science blog – Part 2

We think this TS Eliot poem might be where Cats Protection came up with our cat’s original name, Bill Bailey. That… https://t.co/WQSHWn5U8B