Squishy Cow  heard a lot about the Science March and wanted to see what it was all about, so we went to the London march on Saturday. The Science March was a global event, planned to coincide with Earth Day. 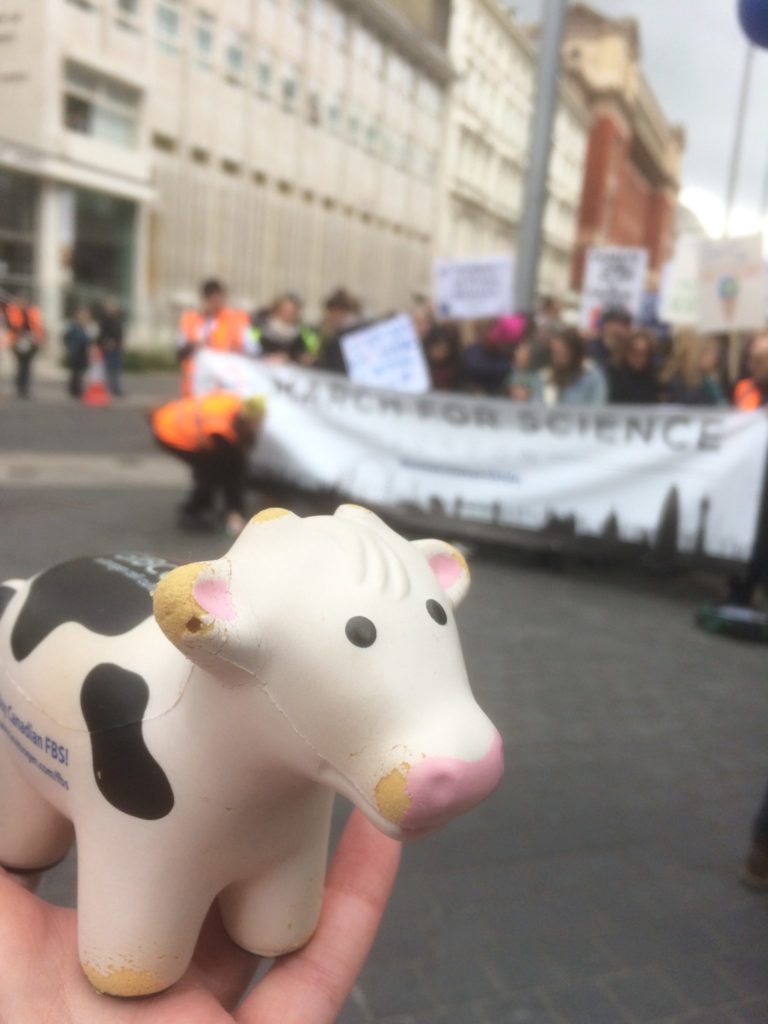 “What was your favourite part of the march, Squishy?”

“The part where you carried me because my legs were too short.”

“That was the entire march. I carried you in my bag for the whole thing!”

“My other favourite part was when we walked past the music man.”

“Which man was that?”

“He wasn’t blind. He was singing ‘She blinded me with science’ “.

“Yes, and then the whole crowd walking past him went ‘Moo!!’ ”

The march started in front of the science museum, and from there walked past several other scientific landmarks in London. We walked past the Royal Institution, and past the Royal Society. At Parliament Square the march ended with a few talks about the importance of science. 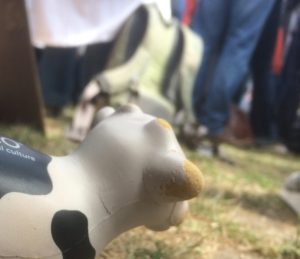 “I couldn’t see anything because everyone was too tall!”

“I couldn’t really see much either. It’s okay, it was mostly for listening. Could you hear everything?”

“First the sound was too quiet but after it was fixed I heard it all. But I’m still not sure I understand.”

“What didn’t you understand.”

“Why we were marching.”

“Well, that’s what they talked about. Science is important to learn about the world, and we should tell people about how important it is, and make sure that everyone appreciates how a lot of things they like – like mobile phones and internet and medicine – are all because of science.”

“Doesn’t everybody already know that? I knew that and I’m a small toy cow.”

“The people who were at the march all knew that, and lots of people who didn’t go also knew that. But some people don’t like to think much about science and then they start to believe it’s not very important. Or they don’t know any scientists so they don’t trust them because they’re all strangers.”

“They are indeed. That’s why it’s important to make friends with a scientist.”

“I am friends with lots of scientists.” 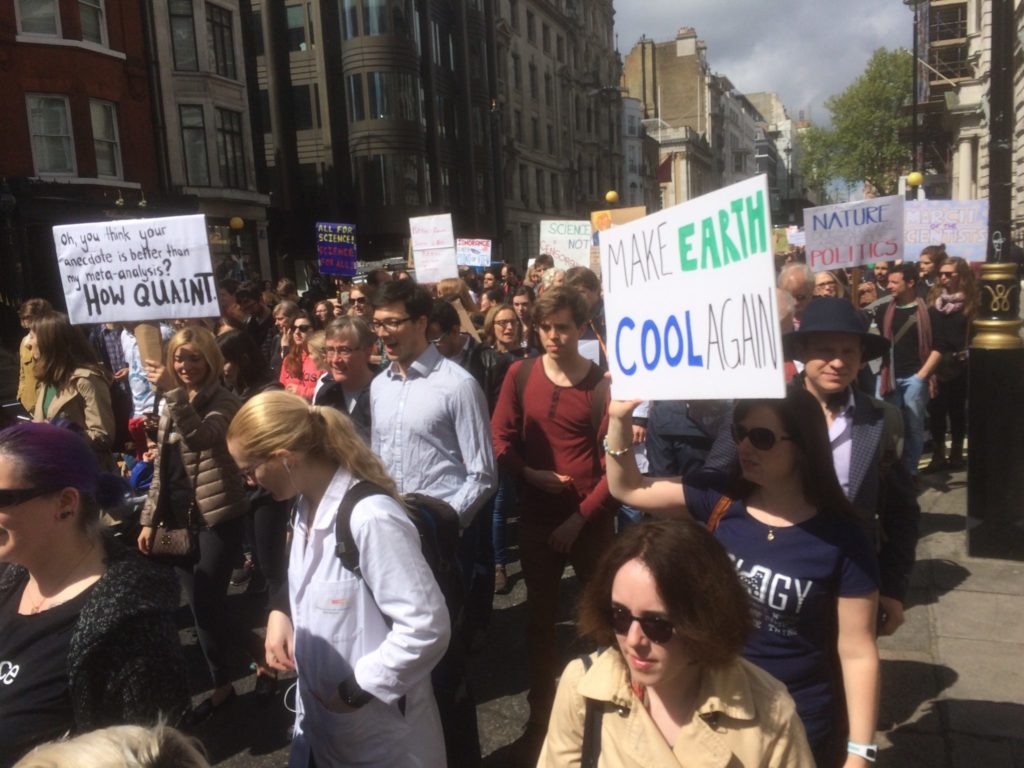 “Who was the man on the cardboard pictures? Is he a scientist?”

“On the signs? Which man? Darwin? Carl Sagan? There were lots of men on signs.”

“I don’t know his name. With the yellow wave on his head.”

“That’s Trump. He’s not a scientist. He’s a businessman and a president.”

“Never heard of him.”

“I just told you about him though, so now you know.”

“Why was Trump on the posters if he is not a scientist?”

“Because he is in a position to decide about how much science is going to get done, and a lot of people are unhappy about decisions he made about national parks and climate research.”

“But we were in London. And I heard people say the march was not about politics. And why did some people on the march wear a knitted pink funny shaped hat? And many people had a flag of Europe, and there were people handing out flyers about events that had nothing to do with science at all but were only about politics. And one lady was shouting slogans about time travel. And the messages on the signs people were carrying were about lots of different things, like about how their colleagues came from different countries and about how warm it is and some were just jokes about science or about how they were angry. Why were there so many different things?”

“You ask a lot of questions.”

“I just want to understand.”

“And that, Squishy, is you how you become a scientist.”

5 short science books you can read in a day

When people post screenshots online and you can see that they've set their default browser or phone font to somethi… https://t.co/HUzUwrUPoX

Reply Retweet Favorite
My monthly newsletter "Mixture" is on the way to its few hundred subscribers, but I think this was a really good is… https://t.co/KGKovP1wDx

Reply Retweet Favorite
Opportunity for budding science writers! I never interned for them but The Scientist published my very first freela… https://t.co/NqU2K1U02S