Top Posts
New on Mixture, writing tips, and other updates
Mixture (the newsletter) got an overhaul
What’s next for easternblot.net?
Twenty years later: My 1999 human genome op-ed
What the zoo can do for you (and...
Book box DIY project
Making science art in Sims 4
Alternative periodic tables
Share Your Sci website is now live!
Launching soon: Share Your Sci
Home Science CommunicationScience life and careers Where do scientists work? They’re not all in labs!
Science life and careers

Where do scientists work? They’re not all in labs!

Last week I had a chat with Lou Woodley and Paige Brown Jarreau about the MySciCareer website which Lou and I launched a few years ago. Our Skype conversation reminded me of the reasons we started the site, and why people visit the site. We created it with science (graduate) students in mind:  On MySciCareer they can find out how different people are using their science degrees in their current jobs. But it’s also a great resource to learn more about the variety of science jobs in general – even if you’re not looking for one yourself.

Where do scientists work?

The classical image of a scientist as a person in a white lab coat standing behind a bench of chemicals is only true for some scientists, and usually only describes part of their job. Many scientists never wear a lab coat at all. Some work in fields that don’t require lab work and do their work behind a computer. Some use their science degrees to teach or write about science. Some work as consultants for companies, or as editors for scientific journals. Some scientists retrain as a patent lawyers or as ethicists, using their science knowledge in combination with another area of expertise. 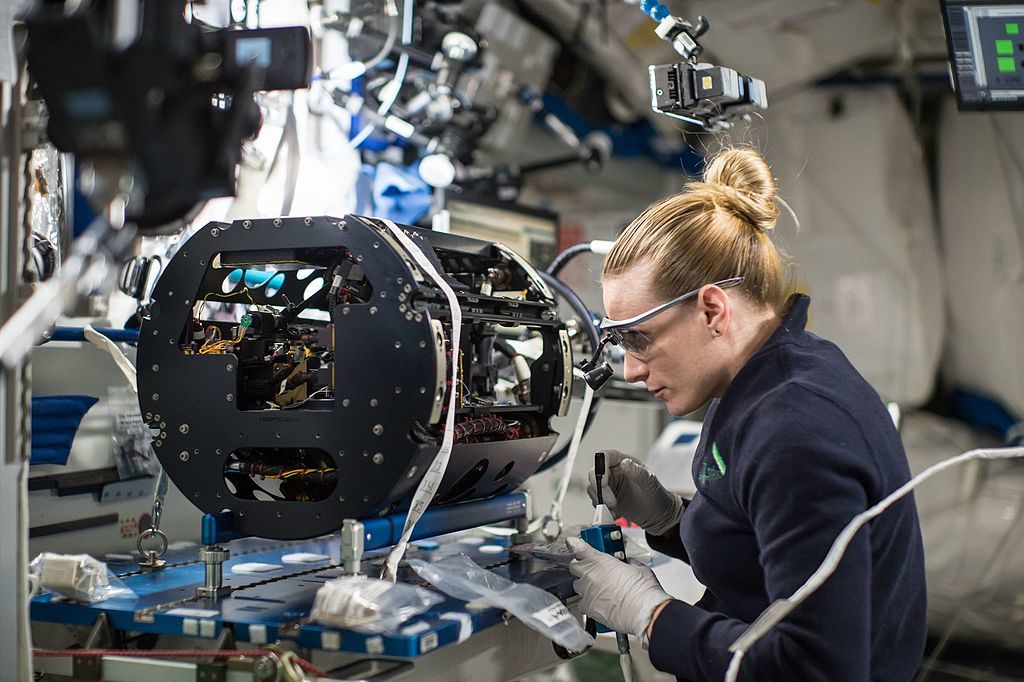 Image: Astronaut and scientist Kate Rubins works with the Multi-user Droplet Combustion Apparatus on the space station.(NASA, via Wikimedia Commons)

What is a scientist?

This broad variety in jobs for science graduates also makes it hard to define what a scientist is. If a scientist is someone who works at a lab bench in a white coat, a lot of PhD students would be more of a scientist than the professors they work for, because early career researchers spend much more time in the lab than their senior colleagues. If a scientist is someone who does research at a university, that would exclude scientists who work in industry. Some people consider anyone in a science-related job to be a scientist, while others only use it to talk about people who do research and publish scientific articles. And while everyone would agree that an academic chemist or biologist is a scientist, not everyone uses the word “scientist” to include social scientists working at the same university.

What is a science degree?

Often, when people ask “where do scientists work”, they mean “what can you do with a science degree”. That’s a bit easier to answer, because we don’t have to worry about whether certain jobs are considered “scientist jobs” by everyone. We still need to say what “science degree” means, though.  I usually use the word “science” to mean any of the natural sciences, earth sciences and life sciences, as well as mathematics, computer science, and applied degrees like chemical engineering or medical degrees that include a component of scientific research.  A characteristic of a science degree is that you learn how to carry out experimental research with the goal of discovering new knowledge.

At MySciCareer, we’ve taken a broad approach to what a science degree is, and you can find stories by people with a wide variety of backgrounds who all consider themselves to either have a science degree or work in a science-related field.

What can you do with a science degree?

So, what CAN you do with a science degree? There are almost as many examples of jobs as there are people, but here is a short list of a few examples. Some of these will require some additional training, but others you can do straight after a science degree.

There are lots of other places where scientists work, so the list goes on!

Some of these jobs take scientists to interesting locations for work.  I once met someone who worked as a scientist for customs at the airport. Part of his job was, for example, to find out if a confiscated item was made of materials that weren’t allowed to be imported (like ivory). I also met scientists who worked for beer breweries, or who travelled to schools in remote locations in Africa with a mobile teaching laboratory. There are scientists in offices, libraries, and schools. Some even work in Antarctica, in the rain forest, and on the International Space Station (as pictured above).

So, where do scientists work? Everywhere!

Back to school (or lab or work) science supplies

LinkedOut – Why I deleted my LinkedIn profile

Thank you so much, I’ll be sharing this to let people know where scientists can work!