A research project asking whether scientists can foster public trust by posting selfies on Instagram has raised more than $10,000 on crowdfunding platform Experiment. The goal of the project, led by science communication expert Paige Jarreau, is to investigate whether selfies of scientists influence public perception of researchers.

It’s an interesting project. Many people never meet a scientist. They might have certain ideas on what scientists are like, and social media can certainly change that image. To promote the fundraising effort, the team behind the study also encouraged scientists on social media to share their scientist selfies with the #ScientistsWhoSelfie hashtag, and they got a great response.

I don’t personally take selfies, so I’m a bit bemused by the uptake of the hashtag. So many faces! It’s not something I’d take part in myself. First of all, I’m not really a “scientist” anymore: I don’t do any visibly interesting research that I could photograph myself doing. But I also just don’t really take pictures of myself very often.

Selfies are not my form of online expression 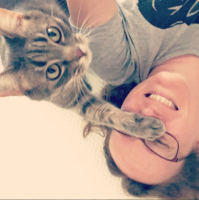 a rare selfie of me

I don’t like taking selfies. If you look at my Instagram feed, it’s all pictures of things I saw, books I read, animals I met, and places I’ve been. Only very occasionally does my feed have people in it at all, and it’s even rarer for these people to be me. Whenever I’ve tried taking selfies, they inevitably end with me not being in frame, or with something else dominating the picture. I am a scientist who does not selfie.

I have profile pictures with my face in it, which means people can put a face to the name, but I don’t regularly post new pictures of myself. Does this mean I am seen as unpersonable online? I doubt that, because I’ve been making friends online since before it was cool.

I’ve talked to lots of people online over the years, and made personal connections, mostly without showing my face. I built my first website from scratch (by emailing html commands to an ftp server) in 1997. I joined online forums and games. I talked about books I read and films I liked and occasionally I would share bits of my life that reflected what it was like to be a science student, or to work in a lab. I made friends I still have, almost none of whom are scientists.

We connected because we had the same sense of humour and interests. We bonded over mutual hobbies which all of us have since abandoned. I started my first online diary in 2000 and my first proper blog in 2001. Neither was about science, but it came up once in a while. I wrote about moving abroad, and about exams and deadlines and applications. My blog posts were aimed at friends, including new friends I hadn’t met yet.

My current blog (the one you’re on right now) has an archive going back to 2005, when I decided I wanted to keep the science-themed content separate from my ramblings about my friends or the time I transported an Ikea bookcase on the bus.

I created a separate place for science for one main reason: I wanted to look professional. I wanted to reach an audience beyond just my friends. I wanted an audience who would come to me for content, and not for me. After all, I thought, science itself is all about the content, and not about the people. A research paper’s merit is not determined by the names at the top, but by the quality of the research. (Well, that’s not true in practice, but in an ideal world it would be.)

Connecting with other science fans

My separate science blog did well. It was occasionally used as a source for much bigger blogs, and I was invited to join a blog network. I wrote a second blog there, which was mostly read by other scientists. Those posts are also in the archives here, so this blog is now a confusing amalgam of content written for scientists, and content written for anyone interested in the science/culture overlap.

I also made a lot more online friends, but a strange thing happened: These new online friends were, by and large, also scientists, science communicators, or science fans themselves, because they found me based on the content I was putting out there.

Once upon a time, making content for my friends implied that I was conversing with people who didn’t seek out science, but now my audience was already interested in science. Would taking selfies change this? No. I would just be sharing selfies of me with my existing audience of mostly other science nerds. I wouldn’t be reaching a new audience.

If photos are your communication medium, and people following you are curious about science, then a selfie would make sense. But from my own experience online, I’ve found that the best way  to communicate with non-scientists is to go places that are not about science, and talk about things that are not science. You don’t even have to show your face, or even your name – simply making friends and then telling them that you are a scientist can be enough to change someone’s perceptions of scientists. In other words, meet your neighbours on the internet, not your colleagues.

But maybe, for some people, posting selfies is their way to reach new people online. I’d be curious to find out if that’s something the study results will show once the selfie research project has finished. The project timeline includes an aim to publish the results of the study next summer in an open access journal, so I’ll look forward to that!

I took last month off from Forbes writing because I had SO much other work, but I'm working on a new piece at the m… https://t.co/yjiGxGcy1f

Reply Retweet Favorite
Week 2 of the heatwave and my fan is now just pointlessly blowing hot air on me. I can't complain - I live in a bas… https://t.co/UvcJD4XoMI

Reply Retweet Favorite
Celebrate #InternationalCatDay by being distracted by a mystery noise outside. https://t.co/1Mdwc2XBha