Disclaimer: This post was made possible in cooperation with Merck and the Merck Curiosity Initiative. More information below the piece.

The Ars Electronica festival, held this week in Linz, Austria, has a programme filled with exhibits, concerts and symposia surrounding art and technology. One of the events taking place during the festival is a conference to discuss the artistic and scientific outcomes of the European Digital Art and Science Network (EDASN) art/science residencies.

The EDASN residencies were launched in 2014 to connect scientific research with the digital arts. An impressive list of institutions joined the EDASN initiative, including CERN in Switzerland, the European Southern Observatory (ESO) in Chile, and the European Space Agency in the Netherlands.

“It’s a tremendous compliment to us that these organisations regard us as the right cultural partner,” says EDASN project coordinator Jessica Galirow, “But we’re proud not only of the scientific company we’re keeping but also of the intentionally diverse array of our cultural partners,”  referring to the  seven different cultural organisations EDASN has worked with across Europe. 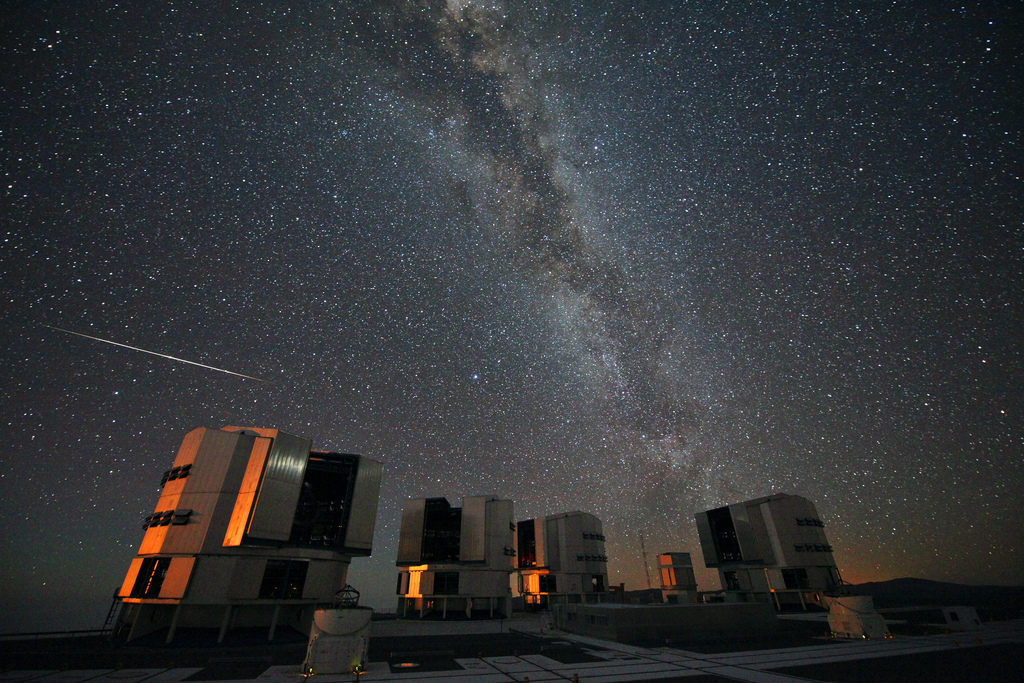 Artist-in-residence schemes, such as the one EDASN coordinates, are common across the arts. An artist or composer might be placed in a school or museum or public institution for several weeks to months, where they create work inspired by or in collaboration with their host organisation. In the case of art/science residencies, the artist is placed in a scientific institution.

Besides EDASN, several other organisations around the world coordinate art/science residencies. For example, the Australian Network for Art and Technology (ANAT) runs the Synapse art and science residency scheme, while on the other side of the world, the Finnish Bioart Society’s Ars Bioarctica hosts artists at a remote research station in Lapland.

A change of location inspires curiosity

When an artist moves into a research institute, their environment changes in several ways. They’re surrounded by other people, working on entirely different things. And they’re in a very different location – or even in a different country. This change of location alone can trigger new ideas and inspire the resident artists.

Through the Ars Bioarctica artist-in-residence programme, artists visit the Kilpisjärvi Biological Station. Kilpisjärvi station is used by researchers of the University of Helsinki as base for field research or location for working retreats, or by visiting researchers who study the Arctic environment. For many researchers who come to Kilpisjärvi, the location is crucial to the work they’re doing. It was the site for studies ranging from nocturnal bumblebee foraging to the effect of climate change on berry growth. For other visitors, it’s a peaceful and remote place where they can focus.

When artists make their way up to the station a few times per year, they get to work on their art in surroundings that are completely different from their usual studios. The Finnish Bioart Society’s Piritta Puhto describes the residency as an “opportunity to Finnish and international artists to be in a unique environment where one does not have to produce a project but one can do artistic research and fieldwork, take your time to think of what you are doing and try out things, in the same way as the researchers were doing.”

Location can also be a very defining factor for a science/art collaboration. In Australia, Leah Barclay’s used her Synapse residency to develop a community engagement project around the bioacoustics of waterways. Her River Listening project was inherently location-specific, as she creating listening labs and field recordings that showcased the biodiversity of individual river locations in Queensland.

Besides location, contact with researchers is another driving force behind art/science residency schemes. The artists who apply to these programmes are usually already working on science-themed projects, but a residency allows them to have day-to-day access to scientists and their tools and libraries.

Artist Sarah Petkus spent a few weeks at the European Space Agency through an EDASN residency. Her robot, NoodleFeet, is designed to explore extra-terrestial environments in an artistic and creative way, rather than through the kind systematic scientific sampling methods that Mars rovers would use.

During her residency, Sarah visited labs, talked to scientists and engineers about their work, or answered questions from people who saw her sitting in the cafeteria with her robot.  “All of these different experiences helped round out my understanding of how the agency functions to accomplish larger-than-life goals over time, and what it means to do so for the people who live to see those goals to fruition.” 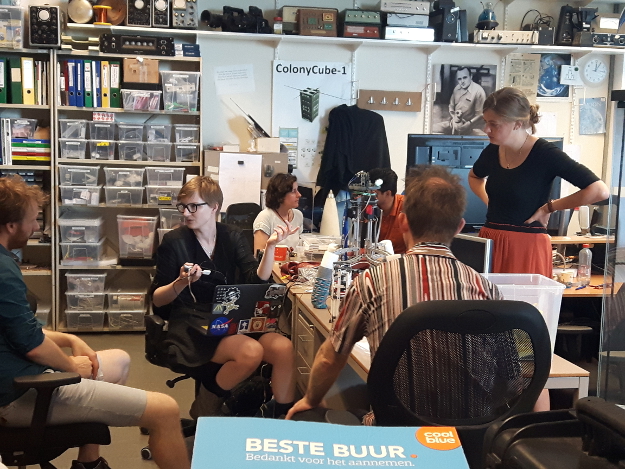 It’s a two-way communication. While the presence of an artist in the research environment doesn’t disturb the scientists, it can be incredibly informative for a researcher to work more closely with a visiting artist. By seeing how an artist views their research, scientists can change their perspective of their own work, and get new ideas for communicating their findings.

Indeed, when the Ars Electronica Futurelab blog interviewed astrophysicist Fernando Comerón, about his experience hosting artists at the European Southern Observatory, he mentioned that talking with artists helped his see his own work in a different way: “We tried to establish a common understanding starting from our different languages and we tried to see the place and what we do through the eyes of the others.”

But it’s not just about communication and language. Synapse surveyed their science partners after each residency, and according to program coordinator Jenn Brazier, the participating scientists  “found the presence and input of the artist ‘frees’ their thinking and approach, enabling a more flexible approach to their work.”

Space to be curious

To move research forward, scientists need to come up with lots of new ideas, even if some of them are bad ones. And to get these new ideas, they will need to be inspired to start asking questions. It seems an obvious part of scientific research, but it’s easy to get stuck in a rut and not engage with others outside of the science bubble. To get new ideas, scientists need space to explore and be curious.

Seeing the benefit of curiosity-driven exploration, Merck recently surveyed people working in Germany, the US, and China about curiosity, and published a curiosity report to summarize what they learned. They found that while most people agreed that curiosity is important for developing new ideas, very few people regarded themselves as curious, and many found barriers – such as lack of time or support – towards following their curiosity in their daily work. In response to their findings, Merck developed an interactive feature, Curious Elements, where anyone can train their curiosity skills.

The need for space and time to think was built into the Ars Electronica residency scheme from the start. After their first on-site residency in a scientific institute, the artist has a break during which they can go back to their own studio and process what they learned. Then they have a second residency at the Ars Electronica Futurelab. Galirow explains: ”Such breaks for thinking projects over are really important and help artists and scientists to get some distance to the project””

Synapse residencies were also designed with space for curiosity in mind. “By not being constricted to a specific pathway, the residencies often result in unexpected developments,” says Jenn Brazier.  “Our focus on ‘not anticipating outcomes at the outset’ means that pretty much everything that results from the residency is surprising or unexpected!”

One such unexpected outcome of a Synapse residency was the expansion of Leah Barclay’s bioacoustics project. After her successful River Listening project, she developed further collaborations around the concept of community engagement with water soundscapes, and has since expanded Biosphere Soundscapes across several UNESCO biospheres around the world.

A lot can happen when you give people space to explore their curiosity. Sarah Petkus is currently in Linz, ready to present her NoodleFeet project at the Ars Electronica festival this week. Meanwhile, up in Finland, Bioart Society mentor and artist Leena Valkeapää is ready to welcome the next artist-in-residence at Kilpisjärvi Biological Station. Every new art and science collaboration is another opportunity for two fields to connect and learn from each other, and a driving force to stay curious.

With thanks to Jenn Brazier, Jessica Galirow, Sarah Petkus, Piritta Puhto, and Leena Valkeapää for answering my questions about art/science residencies, and thanks to Merck for providing compensation for the production of this article as part of their Curiosity Initiative. I remained in full control of the idea and concept of this piece, and did all the writing, research, interviews and editing.  In the United States and Canada, Merck is known as Merck KGaA, Darmstadt, Germany.

The Golden Record: a message in a bottle, cast into the cosmic ocean

I absolutely agree that collaboration between two subjects, such as science and art, are mutually beneficial. I think it broadens minds and helps to see things in different manners. Great article!

This makes so much sense. In my mind artists are inspired by things that are going on around them. So why wouldn’t science inspire them to create works of art? Art and science are the perfect combination!

"Where do you go when the record is over" NOWHERE! STAY AT HOME FFS! https://t.co/KtlG7SAnFb

Reply Retweet Favorite
Art therapy has been successful in combating depression among isolated populations such as prisoners or people unde… https://t.co/BPbrwYHCDc

Reply Retweet Favorite
Carefully rationing the last of my face cream because Lush is temporarily not taking online orders. (They're reorga… https://t.co/7cEBWOlO3e

Reply Retweet Favorite
Researchers, if you want to work on improving your #scicomm skills while you're not in the lab, I have two workbook… https://t.co/cCP4vN7Kgx

Reply Retweet Favorite
I thought this piece wasn't going to be about COVID at all but *surprise* there was music based on the SARS-CoV-2 s… https://t.co/7kyGv72EZi