Top Posts
New on Mixture, writing tips, and other updates
Mixture (the newsletter) got an overhaul
What’s next for easternblot.net?
Twenty years later: My 1999 human genome op-ed
What the zoo can do for you (and...
Book box DIY project
Making science art in Sims 4
Alternative periodic tables
Share Your Sci website is now live!
Launching soon: Share Your Sci
Home Science EverywhereHistory The Golden Record: a message in a bottle, cast into the cosmic ocean
HistoryMusic

The Golden Record: a message in a bottle, cast into the cosmic ocean

In late summer 1977, NASA launched two spacecraft on a mission to explore the outer planets of the solar system. Voyager 2 launched in mid-August, followed two weeks later by Voyager 1. Forty years later, Voyager 2 is close to interstellar space, and Voyager 1 has already left the solar system. Maybe one day, hundreds of years from now, one of them will reach another civilisation. Curious aliens will collect the spacecraft, examine it, and find a mysterious shiny disk: a record with sounds and images from Earth: The Golden Record. 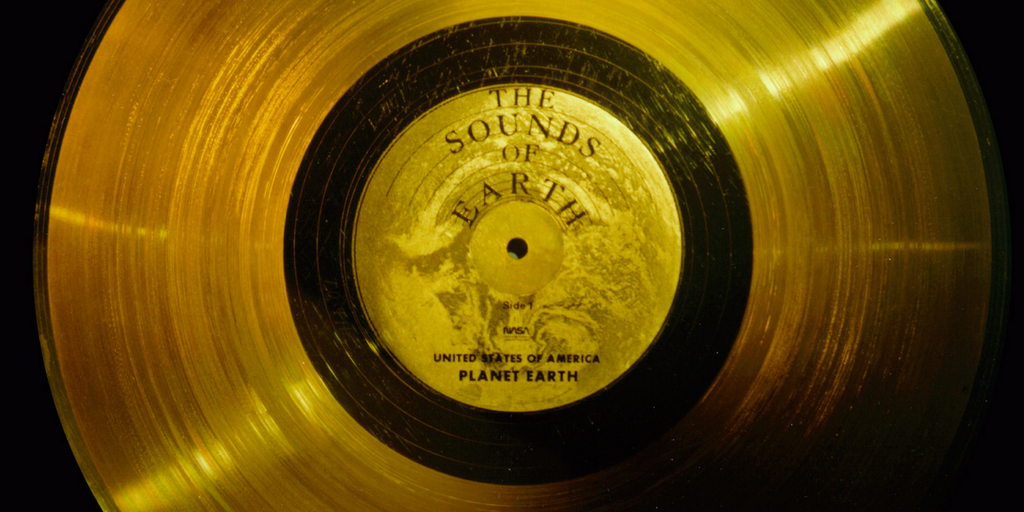 For several months leading up to the Voyager launches, Cornell astrophysicist and science communicator Carl Sagan led a team in charge of compiling a collection of images, music, sounds and greetings that best represented Earth. The Golden Record is truly a snapshot of Earth in 1977. It includes a greeting in Esperanto, then thought to be the future universal language. There’s a photo of a highway in upstate New York, almost empty, with just a few cars that are no longer produced. Images of supermarkets and people going about their daily lives all show the clothes and design of the seventies.

Sagan suggested that the Golden Record was not so much intended for alien cultures, who are unlikely to have compatible record players anyway, but more a sort of time capsule. In the 1980 documentary series Cosmos, he describes the record as “a message in a bottle, cast into the cosmic ocean.”

The content of the Golden Record is a snapshot of 1977, but the record itself is very much a product of its era as well. The Space Race was in full swing, and people in several countries were very excited about space discovery. Just a few months before the Voyager spacecraft launched, the first Star Wars film opened in cinemas, and broke box office records. Space travel and distant galaxies captured Earth’s collective imagination this year, so it made perfect sense to send a message of our planet to outer space.

Among greetings and photos, the Golden Record also contains ninety minutes of music, selected to represent different cultures on Earth. Sagan and his team chose a few classical works – by Mozart, Beethoven, and Bach – as well as Chuck Berry and Louis Armstrong tunes and traditional music from various countries. The record notably does not contain any of the pop or rock music that we now associate irrevocably with the sixties and seventies.

Of course, it’s difficult to know which currently popular music will stand the test of time and what is just a trend, but The Beatles and several other groups had firmly established their genre by the time the record was assembled. This wasn’t entirely unnoticed by Sagan and his team, and they did select The Beatles’ aptly titled Here Comes The Sun to be included on the record. Unfortunately, legal barriers prevented the song to be sent into space.

No, future alien recipients of the Golden Record will not learn about The Beatles. They also won’t find out how well the Star Wars franchise did, or how the internet took over the world, or how we became glued to our phones – but rarely use them to make a call. They won’t know that vinyl records went out of fashion and then had a comeback. They didn’t see how we messed up Earth’s climate (but perhaps they inferred from the pictures of 1970’s cars). But what they will see in our snapshot of 1977 is a planet of people excited to share their greetings and music.

How does a steelpan produce sound? Help researchers find out!