Top Posts
New on Mixture, writing tips, and other updates
Mixture (the newsletter) got an overhaul
What’s next for easternblot.net?
Twenty years later: My 1999 human genome op-ed
What the zoo can do for you (and...
Book box DIY project
Making science art in Sims 4
Alternative periodic tables
Share Your Sci website is now live!
Launching soon: Share Your Sci
Home Science in Art & CultureMusic Scientists bonding over science songs
MusicMusicians and Scientists

A few weeks ago I gave a talk at the first VOICES conference. This meeting was all about science songs, and held entirely online. The main focus of the conference was the role of science songs in science education, but some of the talks touched on areas not directly related to education. My own session,  with Jonny Berliner and Jennifer Publicover, was a panel on informal learning & outreach, where we discussed some different ways of looking at science songs.

In my talk, Why do scientists sing about science, I focused on science songs that aren’t meant to educate. Songs like the PCR song, Bad Project and Get Data are aimed at people who are already very familiar with life in a research lab. They’re meant to entertain other scientists. (Or, in the case of the PCR song, to sell a PCR machine.) They have other things in common. For example, they’re full of jargon and in-jokes, and are often parodying existing songs. 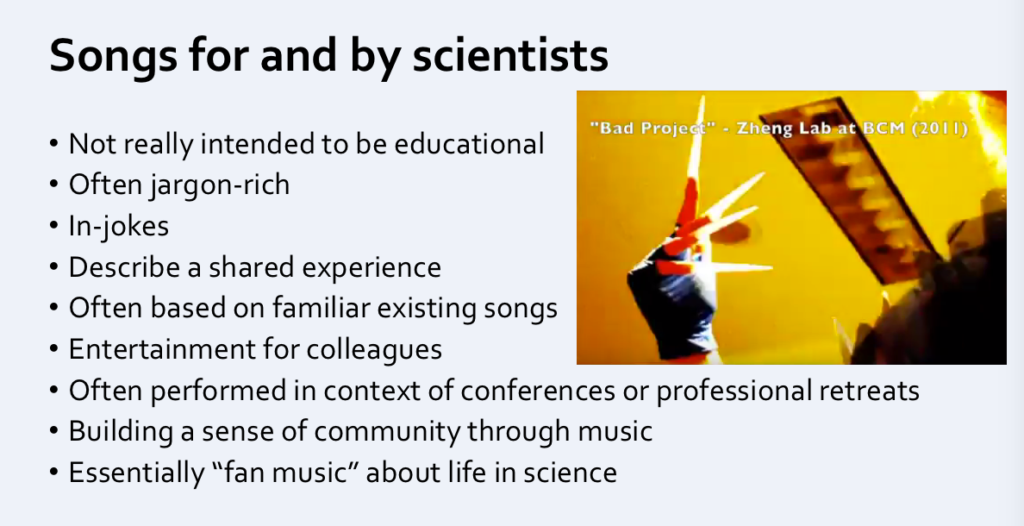 One of the slides from my talk

Does that mean you could consider these kinds of science songs a sort of filk music? That’s what I tried to find out, and what the rest of my VOICES talk was about. The entire fifteen-minute talk is available to watch online now, and you can also view all other recorded sessions of the rest of the science songs conference.

It was a fun conference to be a part of.  I was travelling that week, and I gave my presentation from Lou‘s apartment in Washington DC. I also managed to listen to some of the other sessions, which were all broadcast from different cities and timezones. The panel I was a part of was calling in from Canada, the UK and USA.

At the end of my talk I reminded people that they could sign up for my quarterly newsletter about musicians and scientists. The signup form is on the newsletter signup page, and the next one will go out in November.