Top Posts
Mixture (the newsletter) got an overhaul
What’s next for easternblot.net?
Twenty years later: My 1999 human genome op-ed
What the zoo can do for you (and...
Book box DIY project
Making science art in Sims 4
Alternative periodic tables
Share Your Sci website is now live!
Launching soon: Share Your Sci
How science got its start in art: Science...
Home Science in Art & CultureBooks Book review – What Future
Books 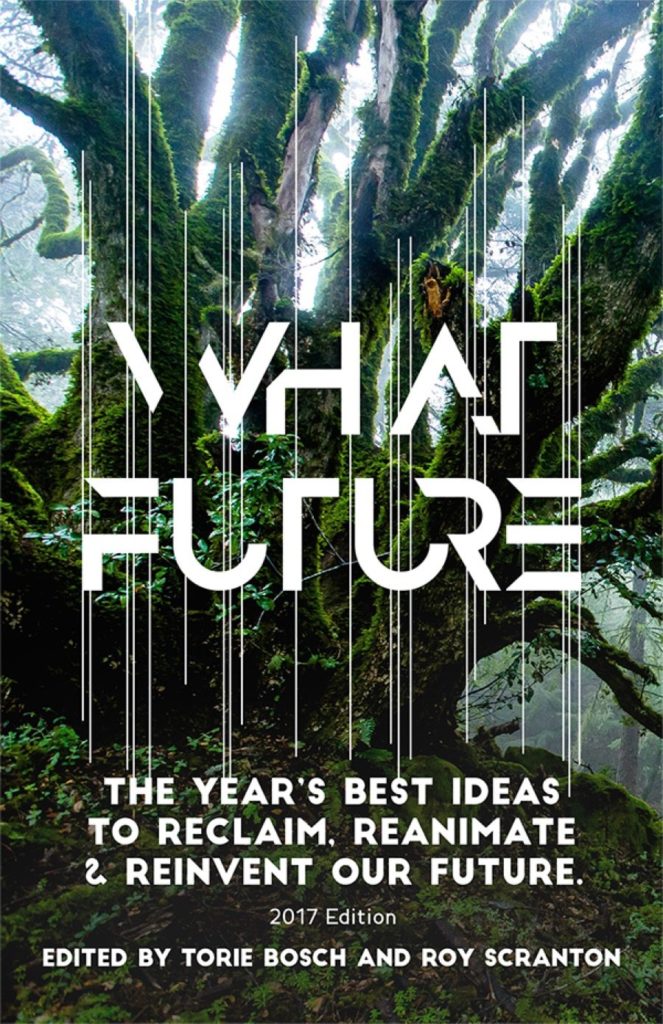 How we imagine the future is a reflection of how we live today. My favourite future is the future from the 1960s, which promised the next millennium to be filled with Jetsons-style robots, flying cars and tall shiny buildings. The Victorian-era vision of the future is my second favourite, with its steampunk imagery. The future of 2017 is different still. In 2017 we looked ahead to living on Mars, we considered the possibilities of genetic engineering with CRISPR-Cas technology, and of neurohacking our brains.

All of these aspects of our future are featured in What Future, together with many others. Editors Torie Bosch and Ron Scranton selected essays from a variety of sources, by writers who covered space travel, future economics, healthcare, society, technology, the environment and many other angles.

Besides covering many different topics, the editors have also made efforts to ensure the anthology includes diverse voices – something that’s often ignored in discussions about the future.  What Future doesn’t just include the usual technological and scientific angles, but features chapters about feminism, gender bias, and Black Lives Matter. This variety is important, because our views of the future aren’t merely determined by the year we currently live in, but also by who is considering this future.

One book can’t possibly include all viewpoints, and for the first few chapters, I briefly feared that What Future was too focused on North America. As I read further, though, the tone changed. Several chapters were not about North America at all, but about self-driving cars in Saudi Arabia, cashless transactions in Sweden, or alternative fuels in Africa. There could still be more of a balance (Africa’s a big continent – and what about China?) but at least other countries were in the mix.

Still, even these chapters are clearly aimed at a North American audience. This was clear even in my favourite chapter: Mallory Pickett’s piece on Swedish payment systems (originally published in Wired). It’s a fantastic article about two men named Björn: one who is driving Sweden’s move to a cashless society, and one who is trying to stop it. But the description of Sweden’s advanced payment systems was not written for me. As a fellow European, I think their payment system is pretty cool, but not that far ahead of other common European money transfer methods. To me, Americans’ constant use of old fashioned cheques is a system that belongs several decades in the past, whereas Sweden is only a tiny step ahead.

Our visions of the future change as we move further toward these futures, but our futures also look different depending on where we live. Is Sweden’s cashless society a future for other countries, or just for Sweden? Are robots for social interaction a solution to a “first world problem”? Will some countries skip certain technologies entirely in favour of whatever comes after that? That last question is addressed directly in What Future, in Erica Gies’ chapter on wind and solar use in Africa. It’s a clear reminder that the path to the future isn’t the same for every country.

What Future doesn’t have all the answers. (After all, its writers are not omniscient.) But it does provide a great summary of what the future looks like as best as we can imagine with our current knowledge (and seen from a mostly North American viewpoint). It’s as good a collection of predictions of the future as you’ll be able to find anywhere, or, to quote book’s tagline, “The Year’s Best Ideas to Reclaim, Reanimate & Reinvent Our Future”. To find out which of those ideas become a reality, stay tuned for the future.