Top Posts
New on Mixture, writing tips, and other updates
Mixture (the newsletter) got an overhaul
What’s next for easternblot.net?
Twenty years later: My 1999 human genome op-ed
What the zoo can do for you (and...
Book box DIY project
Making science art in Sims 4
Alternative periodic tables
Share Your Sci website is now live!
Launching soon: Share Your Sci
Home Science CommunicationCommunity & events Five things scientists can learn from musicians – SpotOn talk
Community & eventsMusicMusicians and Scientists

On Saturday, I gave a five-minute lightning talk  at SpotOn London, about five things scientists can learn from musicians. Below is the text of my talk. The audience was a mix of research scientists and people working in science publishing or science communication, but I aimed it mainly at the researchers. 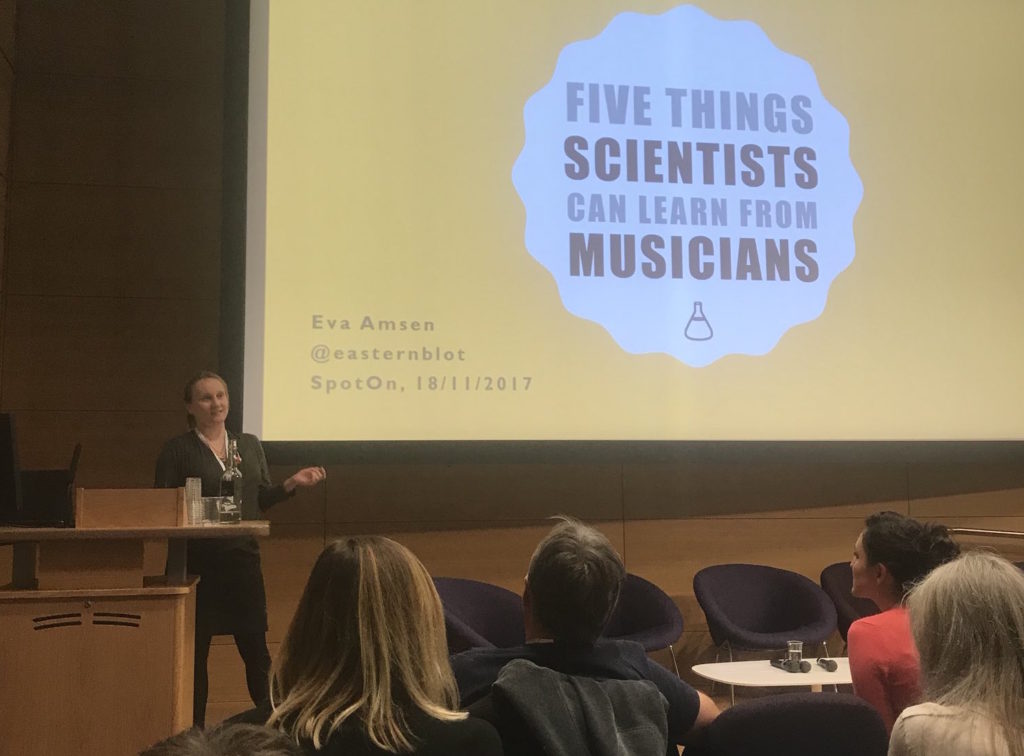 By day, I work as scientific engagement manager at the institute of cancer research. By night, I’m a science writer and amateur violinist.

Many other scientists are also musicians, and many musicians are interested in science. There are several reasons for this, but I don’t have time to go into those now. I also don’t have time to list the many areas of overlap between music and science, from neuroscience to sound engineering.

What I do want to talk about is how people who split their time between music and science are getting a glimpse into both worlds. They learned the basics of “how to be a scientist” as well as “how to be a musician”. Some of these basics are the same for music and science. Like “take good notes so you won’t forget how you did this thing”. That’s one that scientists are generally better at than musicians, but there are also some things that musicians can teach scientists.

Scientists don’t have regular schedules. Even if you manage to get most of your work done between 9 and 5, and you’re lucky not to have to deal with 15-hour experiments, you can’t escape sudden converging deadlines or the necessities of weekend conferences – you’re here today, on a Saturday! Musicians’ schedules are even worse. They often do music in addition to school or a job – or have done at some point in their life – so they have to plan around lessons, practice, rehearsals, auditions, and performances.

Experiments not working, field work failures, rejected grant applications or articles that just won’t get past peer review. They’re all common setbacks for scientists, but you don’t encounter them until you start working in a research group, after you’ve already studied science for a few years.

For musicians, the struggle starts as soon as they pick up their instrument for the very first time. Music practice is as unpredictable, tedious and difficult as a finicky science experiment, but as a musician you learn to deal with these setbacks from the very start, and sometimes from a very young age.

Collaborations are how musicians get ahead. They get a variety of gigs, they invite guest musicians. They grow their audience. Scientists – even successful ones – are much too tempted to go to the same conferences with the same people every year. Sometimes they even look down on their colleagues who do spread their wings by going to the kind of interdisciplinary events like the one we are today. So while you’re here, think like a musician. Listen to each other, connect, and form a cross-genre collaboration.

4. Understand the reality of the job market

A science PhD degree does not guarantee a permanent research job. Still, graduate students are often made to feel that the only job they are being trained for is the same job their supervisors have, when in fact that is the job they are least likely to get.
Musicians are under no illusions. They would all like to be able to pay the bills with music alone, but know that it’s not guaranteed. Almost none of them will have been so misled about their career prospects as many eager early career scientists have been.

Finally, one thing scientists can learn from musicians is to make talented and keen science fans feel welcome and relevant. Science needs supporters. Not just the rich and famous who fund entire research programs, but also the many volunteers who join citizen science projects and the curious readers who somehow continue to keep popular science magazines in business.

But science is unfriendly to outsiders. Papers are behind paywalls, conferences are unaffordable and full of jargon, and scientists are so short on time that they can’t prioritise a public community talk over something that more directly impacts their career.

Musicians could not do without amateurs and fans. They know that the best way to keep their fans is to engage with them, and they encourage non-professional musicians. The link between a scientist and their audience is much more complex, but as scientists you also have to make an effort to be open and welcoming, because indirectly, your livelihood also depends on people who care about what you do.

This talk was just the radio edit of a much larger story I’m working on, but I can tell you more about music and science on Twitter, on my blog, or in my newsletters. 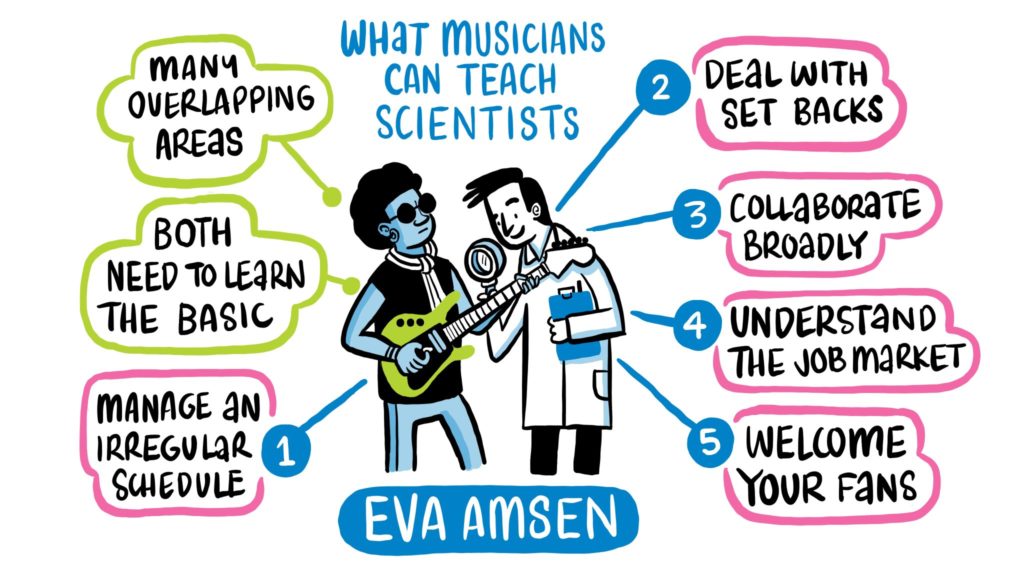 Summary of my SpotOn talk, drawn by Joel Cooper at Ludic Creatives

Do the UK Blog Awards need a science...