Top Posts
New on Mixture, writing tips, and other updates
Mixture (the newsletter) got an overhaul
What’s next for easternblot.net?
Twenty years later: My 1999 human genome op-ed
What the zoo can do for you (and...
Book box DIY project
Making science art in Sims 4
Alternative periodic tables
Share Your Sci website is now live!
Launching soon: Share Your Sci
Home Science CommunicationCommunity & events Originality and identity in science communication
Community & eventsScience CommunicationScience life and careers

Earlier this week, I had a guest post on Errant Science: Clutter. It’s all about my path in science communication, and how I ended up with a kind of patchwork career that makes it difficult to narrow down what my scicomm style or identity is. Here’s an excerpt, and you can read the rest over at the Clutter blog.

“Doing a lot of different SciComm things post-PhD might have given me a good foundation to be flexible (or at least to write an overview of the science communication field) but it also means I have no real “SciComm identity” of my own. I’ve had the same blog for 13 years. In that time I’ve lived in three cities in two countries and had five different jobs (plus various freelance roles). I’ve been a researcher and a publisher and a writer and an educator. I still have multiple roles at once, and if I meet someone new I have to do some quick mental gymnastic to figure out what they might know about me and how I should introduce myself.” 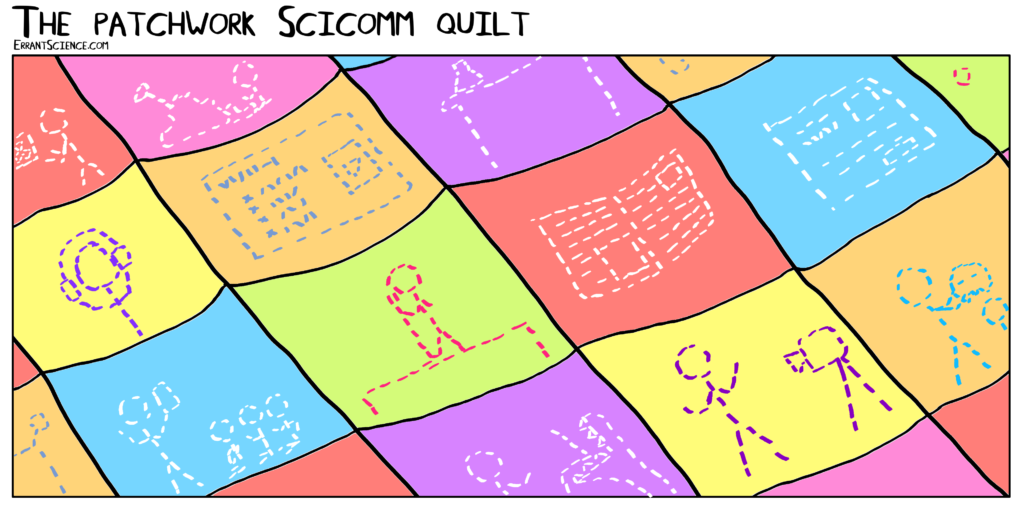 One of the random things I’m about to do in a few days is a performance at Science Showoff. I’ve done Showoff before, but it’s been a while, and I’d been meaning to find an opportunity to have another go. On Tuesday I’m one of the speakers in an all-European line-up of science communicators and scientists. I will be talking about the lack of originality in scientific article writing. In particular, the abundance of the phrase “Of Mice and Men” in article titles. Yes, long-time readers of this blog know exactly where this is going… It will be a live reading of the Mice and Men poem!

On the topic of identity, I’ve also been thinking about the future of this blog. It lacks a strong identity because it’s grown with me from grad student to old person. I’ve had this blog for more than a quarter of my life, and I was in my twenties when I started it, so I’ve changed, and the blog changed. Like my career, it’s a patchwork. It includes archives of at least three other old blogs. It gets traffic, but very few consistent regular visitors. The name is also my own online handle, so I can’t expand it beyond a personal project. I’m starting to think I need something new. A platform rather than a blog? A group effort? Offline as well as online? Encouraging community? Topics broader than science, but still with a strong science message? Avenues for collaboration? Funding? My notebooks are full of ideas, but so far none of them are less patchy and unfocused than this blog already is.