Top Posts
New on Mixture, writing tips, and other updates
Mixture (the newsletter) got an overhaul
What’s next for easternblot.net?
Twenty years later: My 1999 human genome op-ed
What the zoo can do for you (and...
Book box DIY project
Making science art in Sims 4
Alternative periodic tables
Share Your Sci website is now live!
Launching soon: Share Your Sci
Home Musicians and Scientists Do musicians and scientists always get paid to perform at events?
Musicians and Scientists

I have a new post up on Medium, about the phenomenon of musicians and scientists who entertain (or educate) others without receiving payment. There are several types of events where you would find a mix of amateur and professional musicians, or of scientists and science communicators. Some of them get paid for that appearance, others do not. The full post goes into a lot of depth and refers several academic papers, but I also ran a poll on Twitter to see whether people there expected musicians or scientists to be paid to perform at events. The results were interesting, and I’ll include that part of the Medium post below. 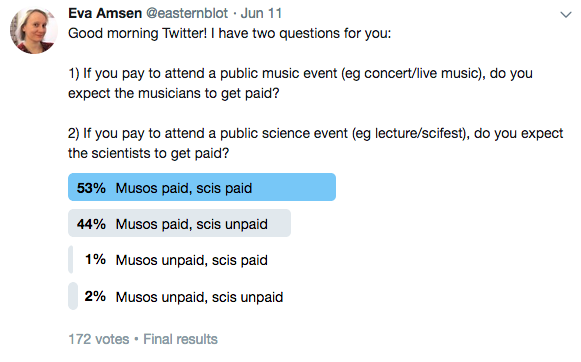 The responses suggested that people absolutely expect musicians to be paid, and some of the replies indicated that this is because they perceive music to be the musicians’ profession. But many expected the scientist to not be paid, because giving that public science talk is somehow already understood to be part of their overall role. (I should mention here that many of my Twitter followers are scientists themselves, so they might be thinking of their own talks.)

Almost everyone agreed that they expect musicians to be paid to perform, though. But I just spent several paragraphs giving examples of music performances where musicians regularly don’t get paid!

When these poll-answers were thinking of a music performance, they immediately imagined professional musicians who get paid. But some high-profile, professional, crowd-pulling speakers at science events also get paid! Many people who answered the poll were imagining “scientist speakers” to do a public service, or to promote their own work. Those are not the only kind of scientist speakers.

Read the rest on Medium!