Top Posts
New on Mixture, writing tips, and other updates
Mixture (the newsletter) got an overhaul
What’s next for easternblot.net?
Twenty years later: My 1999 human genome op-ed
What the zoo can do for you (and...
Book box DIY project
Making science art in Sims 4
Alternative periodic tables
Share Your Sci website is now live!
Launching soon: Share Your Sci
Home Science EverywhereCreative & design 13 Science Halloween items on RedBubble
Creative & designScience at home

Disclosure: I was compensated for this post. This post also contains affiliate links and I will be compensated if you make a purchase after clicking on my links.

RedBubble has an expertly curated Halloween collection with beautiful pumpkins, cat and skull art. I’m going to dig a bit deeper into their Halloween assortment, and look at science items specifically. I managed to find 13 items that are spookily scientific and scientifically spooky.

The Venn diagram of science and Halloween only slightly overlaps, and when it does, it can be difficult to avoid the “mad scientist” trope.

This axolotl in a lab coat is in the stereotypical mad scientist style. Look at him throw his head back in maniacal laughter! 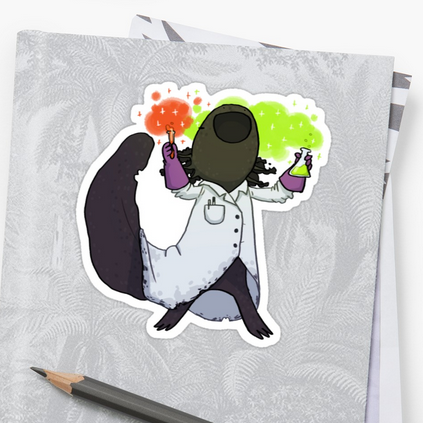 In a similar vein, there’s this card of a salamander in a beaker of eyeballs, and this tote bag with the radioactive warning label. They make research labs seem like a terrifying place. 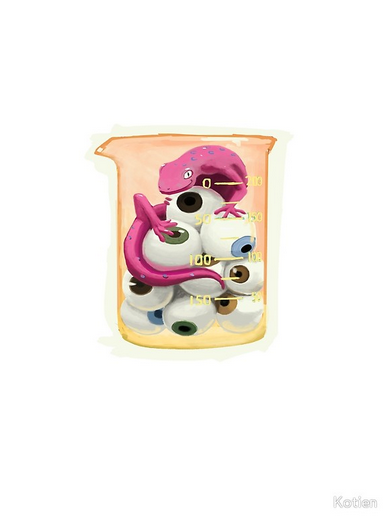 200mL of eyeballs. Card by Kotien. 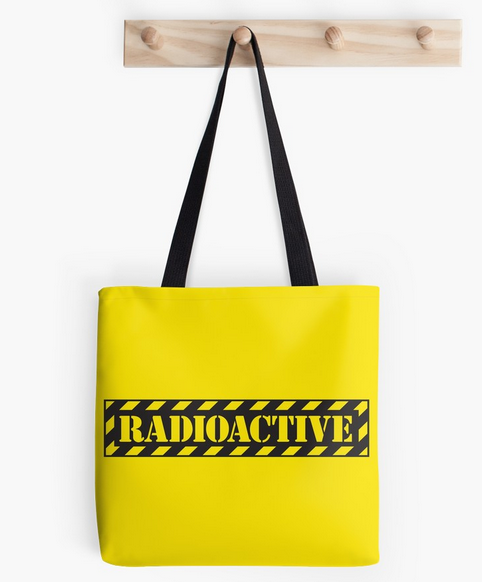 The Halloween version of science labs are often more science fiction than science. They’re inspired by Frankenstein and Rocky Horror Picture Show. “Come up to the lab and see what’s on the slab.” It’s not the most realistic portrayal of science.

There’s nothing scary about scientists, of course. They don’t look like wild-haired mad scientists. They just look like regular people. So one of these shirts would make a much more realistic scientist outfit for Halloween. 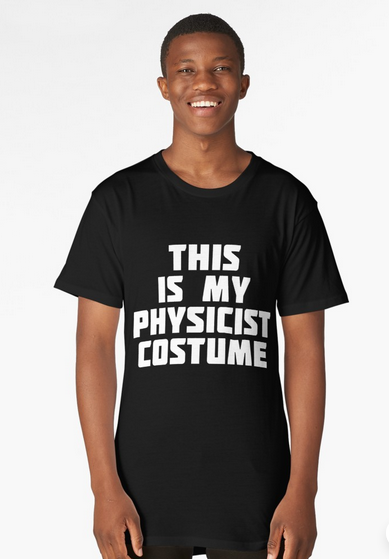 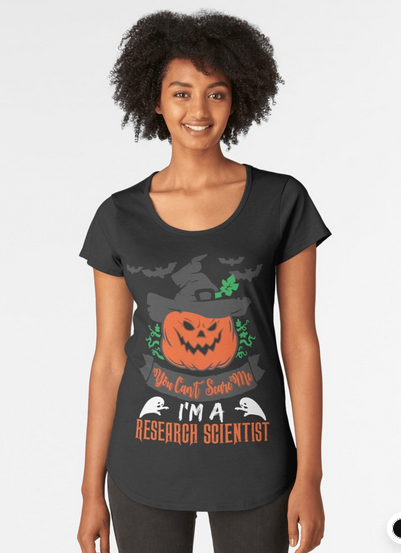 You can’t scare me, I’m a research scientist, by wantneedlove

Another science Halloween twist is the “spooky science jokes” genre. Some of these aren’t specific to Halloween. Your baby would always look great in this Schroedinger’s Cat DEAD/ALIVE outfit: 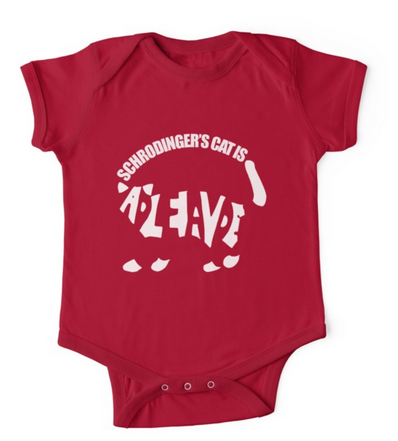 And which physicist wouldn’t want a spooky action at a distance laptop sticker? 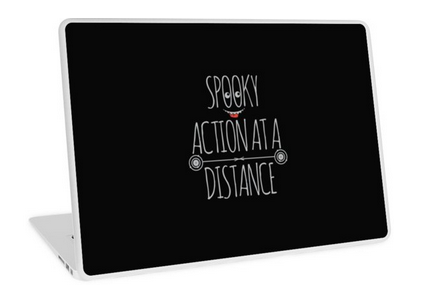 Spooky action at a distance. Laptop sleeve by kangkoeng

Statisticians, meanwhile, can get this paranormal distribution shirt: 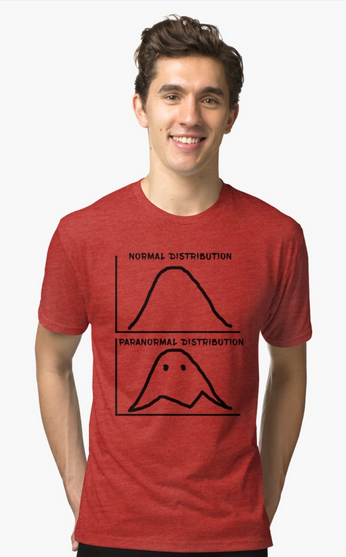 The periodic table is always an easy fallback option for chemistry humour. Did you know that the elements of Halloween are Iron (Fe) and Argon (Ar)? 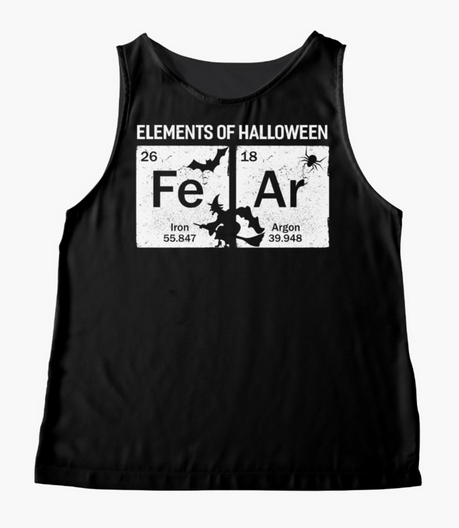 Elements of Halloween shirt, by Anna0908

For something a bit more gothic and classy, we turn to biology, history and art for some anatomically correct bats. 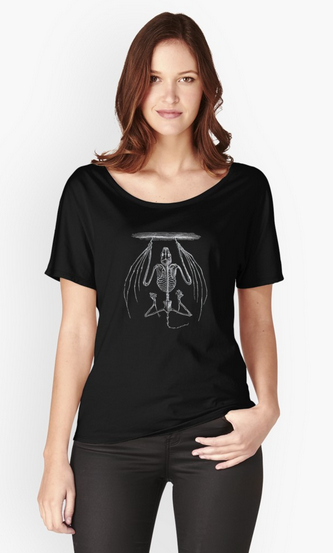 Bat skeleton T-shirt, by Royanne1320, based on an illustration by Charles Bell.

And this tote bag has a collection of bat images drawn by the famous biologist and scientific illustrator Ernst Haeckel. 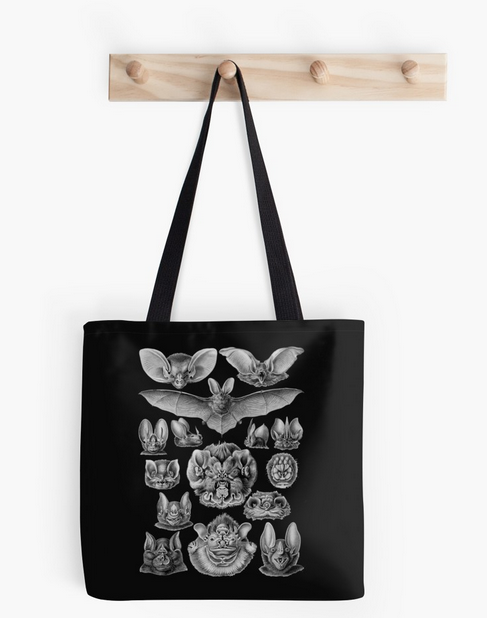 Bat tote bag, by monsterplanet, based on an illustration by Ernst Haeckel

Other science Halloween items on Redbubble

The number pi is often associated with math and science, but it’s really just a number. It’s great material for pi/pie puns, of course, and what would Halloween be without this pumpkin pi pouch? 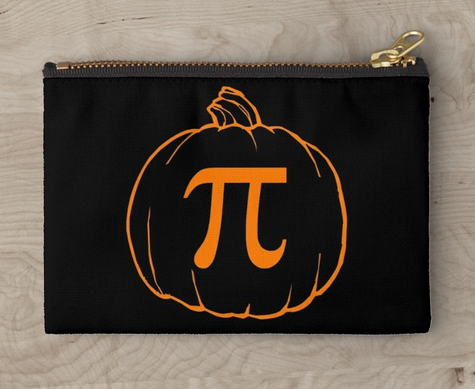 Finally, if chemistry is more your thing, this chemistry of blood poster would look great as a science Halloween party decoration. 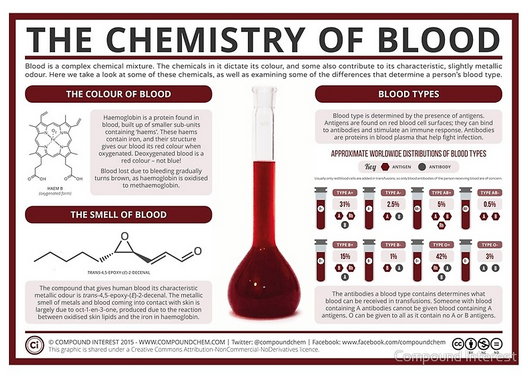 However you’re celebrating Halloween, you have no excuse now not to add a little science to the spooky mix!