Through some ill-advised decisions I ended up with five blogs. I maintain the work blog, I have a Tumblr about music and science and a neglected Medium page, I write a weekly travel feature for The Finch and Pea, and of course I have this blog as well. On top of that, I occasionally write for other publications.

I don’t have time to instantly turn every idea into an actual post or pitch, because I only rarely have time to sit down and write – and when I do sit down to write, I need to have ideas ready to go. Those ideas come at random moments: at work, on the bus, while half asleep in bed. If I’d write them down in a notebook, I would have to always have that particular notebook on me: if I write my ideas in whatever notebook I’m using at the time, it will get lost in between all the other notes and to-do lists.

Last year, I came up with a solution, and I’ve used it often enough now to be certain that it works for me. (“For me” is the important clause. It might not work for you, but nobody else’s methods ever worked for me, so I made my own. For me.)

I created a Google Form called “Writing Ideas” in Google Drive. Google Forms are meant to create web surveys or to gather the opinions of the people you email it to. In my case, the form is secret, and only I have the url to find it.

My form has a big text box for writing ideas, and a few tick boxes with some of the regular places I would place these ideas. (Work is deliberately missing from the list, because I’m never short of ideas for that blog, and it doesn’t require the same creative thought process. ) 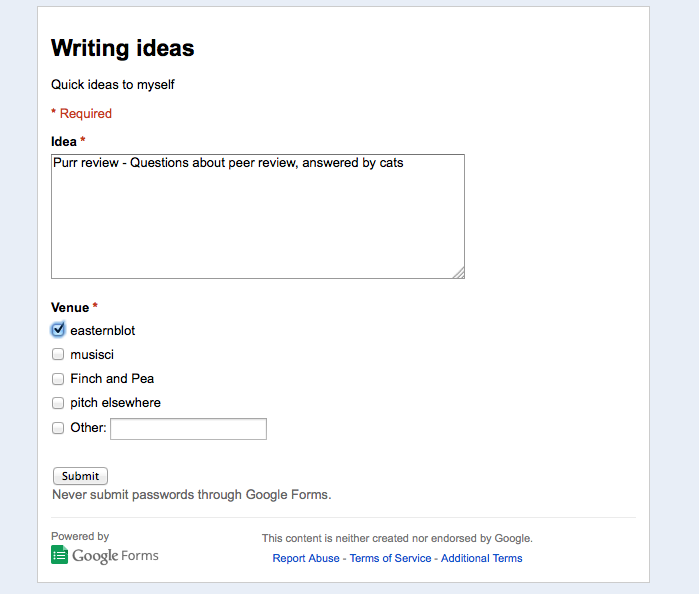 When I enter something in this form, it automatically goes to a spreadsheet. As you can see below, this  is the 28th row on that sheet. Once in a while I will move the used ideas to a new tab, so the ones left are all ideas that I can still use for future posts or pitches! (Although some I delete when I realise how stupid they are. I’m still on the fence about “purr review”.)

I have this form bookmarked on both my personal laptop and my work computer, so that I can jot down ideas no matter which computer I’m at.

But what if I’m not at a computer? 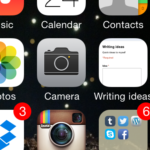 I also have the form bookmarked on my iPhone, and I have that bookmark set to show as an icon on my home screen. It only takes me a single tap to open it on my phone, and it works the exact same way: I enter the idea, submit the form, and it adds it to my spreadsheet of ideas.

Some of my favourite Finch and Pea travel posts this past year have come from ideas I entered in my Writing Ideas form, including today’s post about the Mariana Trench, this one about the dark side of the moon, and the one about Taq polymerase and Yellowstone. My talk at Story Collider in April was also based on an idea I entered on the form, as was “Owl’s lament” on this blog – and in fact this very post was also on my list of ideas as “meta! this form!”

I’ve tried lots of different note-taking and productivity tools, but for this purpose, for me, a Google Form turned out to be the best solution.

How to make a dino cake

Take back the comments sections

I like to keep my writing ideas in a notebook and use Evernote.

I’ve tried Evernote but I never seem to quite get into it!

This is one of the newsletters I write every month. It's for scientists (and science communicators) but wouldn't be… https://t.co/hawq2FaOwx

Reply Retweet Favorite
Virtual coworking session for science writers and science communicators on December 10 - last one of the year! https://t.co/wohkhOeGIX

Reply Retweet Favorite
Tab for a Cause is *really* close to having raised 1 million $ for charity just from people like you and me opening… https://t.co/rYJSkNyjRk

Reply Retweet Favorite
This month's virtual coworking for science writers/communicators starts in 90 minutes. If you want to join, get the… https://t.co/9jgxoNQfIw

Reply Retweet Favorite
Everyone’s complaining about the new Twitter, but I haven’t updated the app yet so I have no idea what’s going on! https://t.co/8zWnm5tK9r