Top Posts
Mixture (the newsletter) got an overhaul
What’s next for easternblot.net?
Twenty years later: My 1999 human genome op-ed
What the zoo can do for you (and...
Book box DIY project
Making science art in Sims 4
Alternative periodic tables
Share Your Sci website is now live!
Launching soon: Share Your Sci
How science got its start in art: Science...
Home Science in Art & CultureBooks Book review: The Cartoon Introduction to Climate Change
BooksScience in Art & Culture 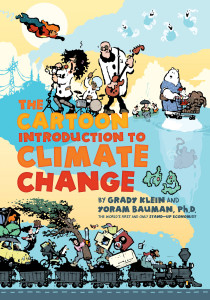 Based on the cover alone, I thought The Cartoon Introduction to Climate Change

would be chaotic, but the inside is very well-organized. The main text runs in boxes between the cartoons, and the cartoons serve to illustrate and entertain. Illustrator Grady Klein’s cartoons are in greyscale, but clear. A few recurring scientist characters appear throughout the book to explain key concepts. Greenhouse gases are consistently drawn as little ghosts, so you recognize them instantly whenever they’re featured in a panel, without needing to remember the chemical names.

The book is divided into chapters that focus on different aspects of climate change. Through cartoons and clear explanations the authors address topics like man-made vs natural climate change, what greenhouse gases are, how economic growth ties into both sides of the climate equation. Author Yoram Bauman (“the world’s first and only stand-up economist”) has a background in environmental economics, but he doesn’t shy away from the science and manages to present clear explanations of chemical and physical concepts.

The intended audience is anyone who wants to know about climate change. While it may appear to some that the authors have an agenda, they are actually extremely measured and they do look at different sides of the story. They provide the science and the information you need to think for yourself.

Big crystals and being original in science blogging

We think this TS Eliot poem might be where Cats Protection came up with our cat’s original name, Bill Bailey. That… https://t.co/WQSHWn5U8B