Top Posts
Mixture (the newsletter) got an overhaul
What’s next for easternblot.net?
Twenty years later: My 1999 human genome op-ed
What the zoo can do for you (and...
Book box DIY project
Making science art in Sims 4
Alternative periodic tables
Share Your Sci website is now live!
Launching soon: Share Your Sci
How science got its start in art: Science...
Home Science Everywhere BRCA2 cycle path
Science EverywhereTravel & placesVisual arts

There’s a cycle path in Cambridge that has the code for the breast cancer gene BRCA2 painted on it, with each nucleotide a colour. If this sounds familiar, you might have read about the BRCA2 cycle path, and the geeky attempts to decode it, on Jenny’s blog last year. (I just re-read it and was again really proud of my math abilities while soaked in rain.)

Today I finally went to check out the cycle path.

I knew the BRCA2 cycle path ran between Addenbrooke’s hospital and Great Shelford, and found a cycle path on the map that corresponded with that route. It took me a while to find out how to get from the hospital grounds to the cycle path, so I went inside the hospital to buy a drink and take a break before I even started. (I worked in a hospital for almost all of my PhD, so now find hospitals a totally normal place to buy some refreshments on the weekend. Why? Where do other people buy their lemonade?)

With help of my iPhone I found the cycle path, but… it looked normal.

[Not pictured: normal looking cycle path. I guess you can kind of imagine it. Just some asphalt in a field.]

The BRCA gene art doesn’t actually start at the hospital, where people could visit it and admire it, but a few minutes of cycling further down the path and, yes, in the middle of a field: 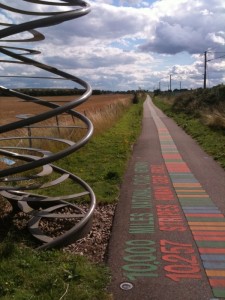 It was about ten minutes or less to pedal to the furthest end of the path, and from this point on the gene sequence was there the whole way. Here are seven seconds of the cycling journey along the BRCA2 path. (Cycling in the middle of the path for artistic reasons for the video. I otherwise kept left like a proper safe cyclist.)

At the other end was the town of Great Shelford. Here, the end/start of the path was actually close to houses, so it’s something you can visit on foot if you’re in Shelford, but the Cambridge end of things really requires a bike. (Maybe it didn’t start at the hospital because the gene was too short… but why didn’t they make the stripes bigger?!) 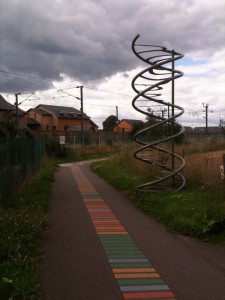 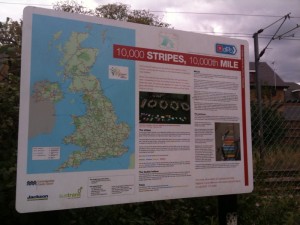 The path was opened in 2007, and includes the 10,000th mile of cycle path in the UK. The nearby Sanger institute (famous for its genome sequencing) suggested to decorate the path with a gene, and BRCA2 was chosen because it has approximately 10,000 base pairs, but also because it’s a gene that people can relate to. Genetic screens for breast cancer risk are something that people will have heard of, and this is the gene that those tests look at.

Now what we still haven’t figured out is: is the gene on the BRCA2 cycle path the healthy version, or a concerning mutation? If I’m ever really, really, bored, I might decode the whole path and find out.

How wonderful. I love the video!! 🙂
Looks and reads as a good weekend fun biking! (or walking, for a bit longer time I guess..)

Cambridge _is_ the middle of a field. HTH.

Åsa, it took me longer to get from my house to the cycle path (about 20 minutes) than to ride over it (less than 10). It’s really unfortunate that the start of it is so remote, otherwise I’d recommend it to anyone visiting. But it would require a bus trip and long walk from the centre of Cambridge. You can see it from the train, though, but very, very briefly.
Richard, yes, indeed. And I don’t like it, and never will, and will readjust my monthly budget to accomodate more frequent train trips to London.

I just realized (yes, I’m slow) that the Shelford end is definitely the “end”, and not another relative “start”, because the ATG codon is at the marker near Cambridge. Now it makes even less sense that it starts in the middle of nowhere… _why_ Cambridge, WHY???

That’s excellent, Eva!
A friend of mine who cycled that bike path almost every day, as a postdoc, swore that the prevailing wind blew against him, both to and from Addenbrooke’s. It sounds windy in your video, too.
Within the next two years, it may be possible for me to cycle into work, using bike paths that run along (usually) dry riverbeds. Then I will have no excuse.

Maybe they think there will be more development in the fields at the Cambridge end so they started it further out. Future proofing sort of thing.
One of the science centres I work in has a really nice gate on a random street corner (it’s technically the back gate) because one day the bypass road is expected to go past there. It’s been there for at least 12 years that I remember, maybe longer, and the route of the road still hasn’t been finalised.
Or maybe the field and the town all looks the same after a while so the designers didn’t really notice …

Are there any other paths like this, with science themes? I guess a sequence lends itself to this kind of treatment. We definitely need one (or several) around London. Matt? London Science Festival?

Doesn’t it start from there because the 10000th mile lies at that part of the road?
Anyway they could still cheat a little bit, or drew the lines thicker.

I just want to remind you all that I tweeted this less than three weeks ago and it already looks like it’s happenin… https://t.co/UztW8aKm6V