Top Posts
New on Mixture, writing tips, and other updates
Mixture (the newsletter) got an overhaul
What’s next for easternblot.net?
Twenty years later: My 1999 human genome op-ed
What the zoo can do for you (and...
Book box DIY project
Making science art in Sims 4
Alternative periodic tables
Share Your Sci website is now live!
Launching soon: Share Your Sci
Home Science in Art & CultureBooks Book review: AsapSCIENCE
BooksScience in Art & Culture 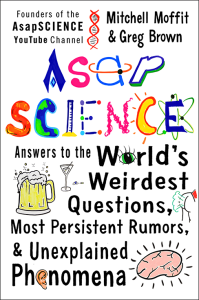 The creators of whiteboard-illustrated YouTube channel ASAP Science have a book coming out later this month: Answers to the World’s Weirdest Questions, Most Persistent Rumors, & Unexplained Phenomena. It’s based on their videos, but in addition to redrawn chapters of familiar topics, they’ve also added some new chapters in a similar style.

The first chapter is a rewrite of one of their videos, and answers the age-old question “Which came first, the chicken or the egg?”

Other than the chicken/egg problem, the book also answers questions such as “Is the 5-second rule legitimate?”, “Is there a hiccup cure?”,  or “What if you stopped going outside?”. You’ll also learn about the science of lying, zombies, orgasms, procrastination, hangover cures, and much more!

Just like the videos, there is a strong emphasis on human biology and bodily functions, and all chapters are heavily illustrated with their trademark style whiteboard drawings. It’s a great book for existing fans of the channel, but also for anyone else who’s into short and fun bursts of science facts about the kind of questions you’ve often asked yourself. (The authors themselves admit that it would make a great book for on the toilet!)

You can (pre-)order the AsapSCIENCE book online ahead of its publication date on March 17.

More about the book:

AsapSCIENCE: Answers to the World’s Weirdest Questions, Most Persistent Rumors, and Unexplained Phenomena | Science Book a Day August 3, 2015 - 5:01 AM