Top Posts
New on Mixture, writing tips, and other updates
Mixture (the newsletter) got an overhaul
What’s next for easternblot.net?
Twenty years later: My 1999 human genome op-ed
What the zoo can do for you (and...
Book box DIY project
Making science art in Sims 4
Alternative periodic tables
Share Your Sci website is now live!
Launching soon: Share Your Sci
Home Science in Art & CultureMusic Musicians and scientists survey results
MusicMusicians and Scientists

Recently, I asked people to tell me how much music and science played a role in their lives, by answering a few survey questions. A total of 763 people* answered the survey, and the survey results are interesting!

256 participants were both scientists and musicians. 130 were only musician, 219 were only scientists, and 158 were neither. 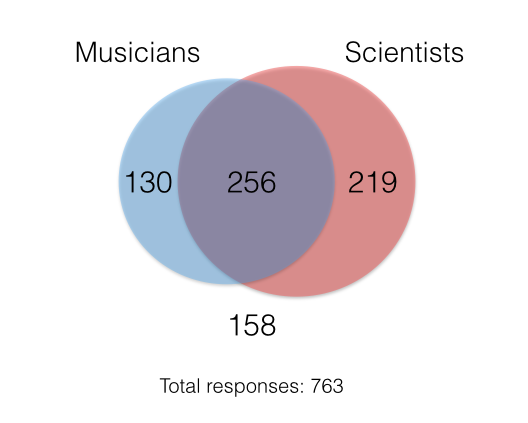 Among non-musicians, scientists were more likely than non-scientists to have previously practiced music. That was the only thing that jumped out, but I haven’t done any statistical analysis.

Among all participants, “reading” was by far the most popular hobby outside of music and science.

When asked to name a musisci, the most common answer was Brian May – closely followed by Brian Cox –  but many named a far less famous musisci, including their friends or colleagues. 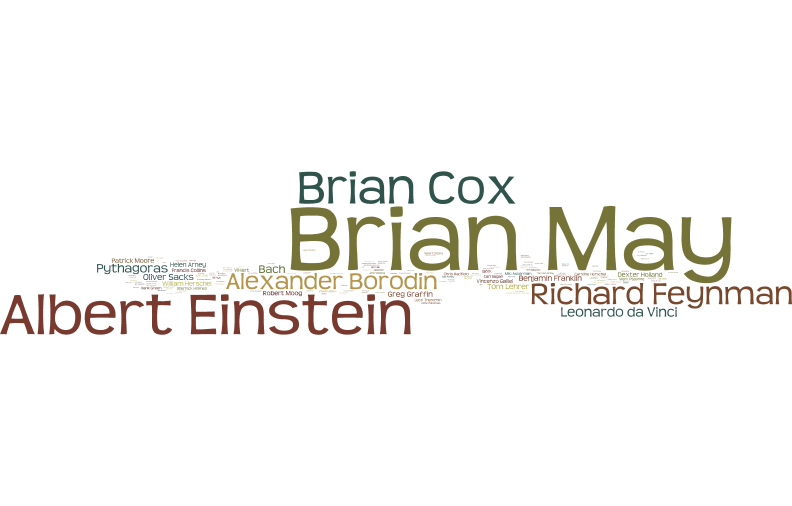 The long version, with more pictures: 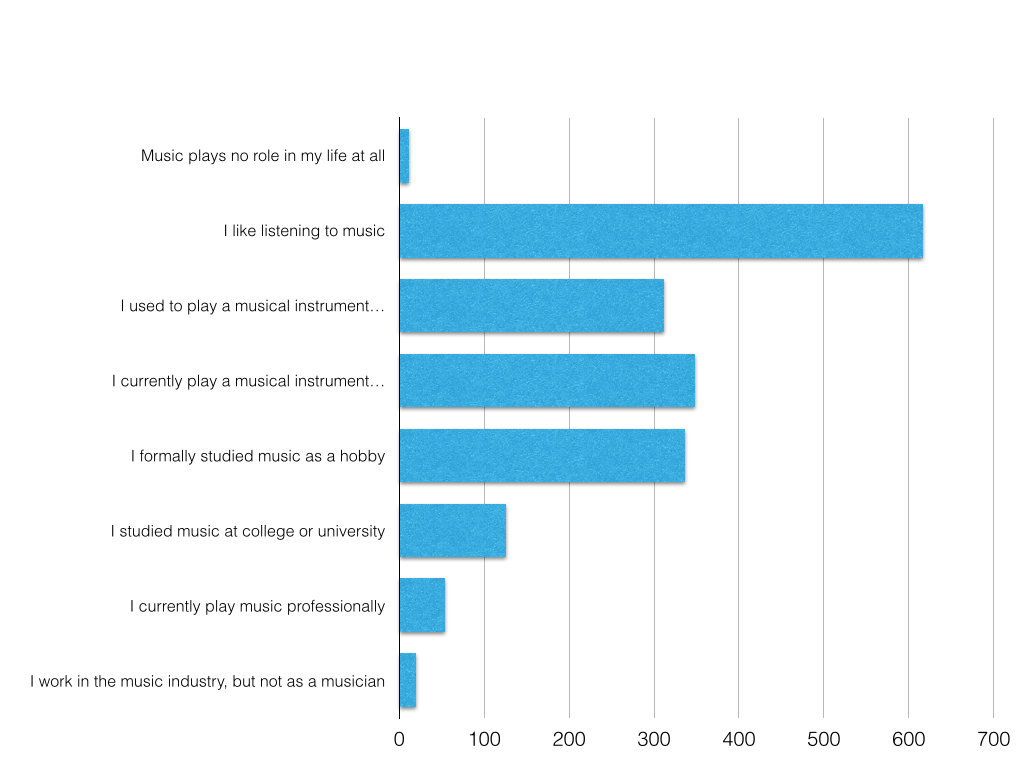 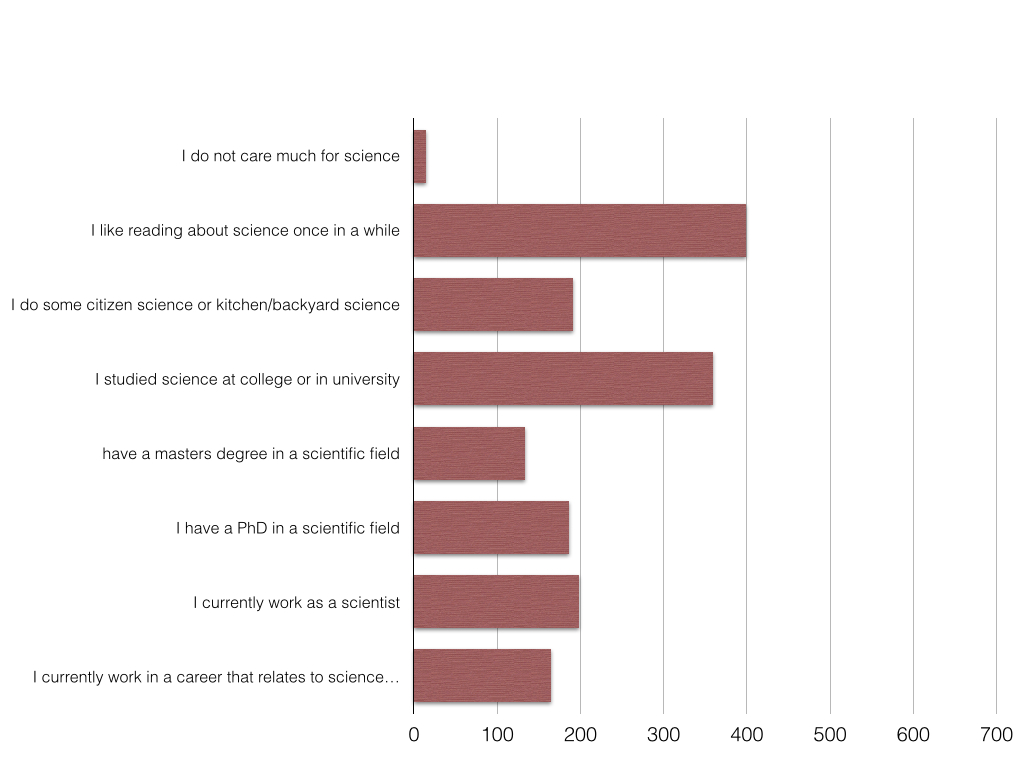 Who took the survey?

Knowing that the survey was about music and science, a lot of participants chose to answer because they have these interests, so the majority of respondents either at least liked listening to music, or reading about science, and many had received further training in these areas.

I flagged responses as being from a “Musician” if they had selected at least one of the following responses:

I flagged responses as being from a “Scientist” if they had selected at least one of the following responses: 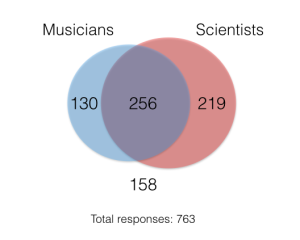 I chose these answers to define the roles in the survey results because they were the answers that indicated a personal choice to actively pursue either music or science. Many participants who selected that they had received “formal music training” also indicated that they “used to play” an instrument, but not currently played one, suggesting that they had had lessons as a child, but no longer practiced. These were not considered “musician” unless they also selected that they either still played, or had studied music for a degree.

Musicians and Scientists overlapped quite a bit. Of course, participation in this survey was voluntary, and people were much more likely to take it if they indeed had an interest in music, science, or both.

As a result of this, it’s hard to compare musicians and non-musicians in the music questions, or scientists and non-scientists in the science questions. But it WAS possible to compare within those groups.

Mostly, not much happened, which sounds boring, but made me more confident that I had selected the groups correctly, removing their biases towards selecting only their most impressive achievement and nor the “lesser” ones.

The musicians answered music questions mostly the same regardless of whether they had studied science, although the ones who were also scientists were more likely to have taken formal music lessons.

The non-scientists answered science questions the same regardless of whether they had practiced music.

BUT: Among non-musicians, scientists were more likely than non-scientists to have played an instrument in the past!

I haven’t done the stats, but the absolute numbers were 132 (of 217) scientists vs 67 (of 150) non-scientists who had been musically active in the past. The full data are on Figshare and graphs are below.

The most likely explanation is not that music somehow “causes” someone to study science, but is more likely to be related to socioeconomic status: Families who can financially and socially afford to allow their kids to study science (instead of having them focus on a specific trade) are probably more likely to have also sent them to music lessons. This also matches the slight increase among musiscis to have had formal music education, compared with musicians only. I haven’t checked this though, but I might be able to find out more in the answers people gave in the open questions. Something for later! 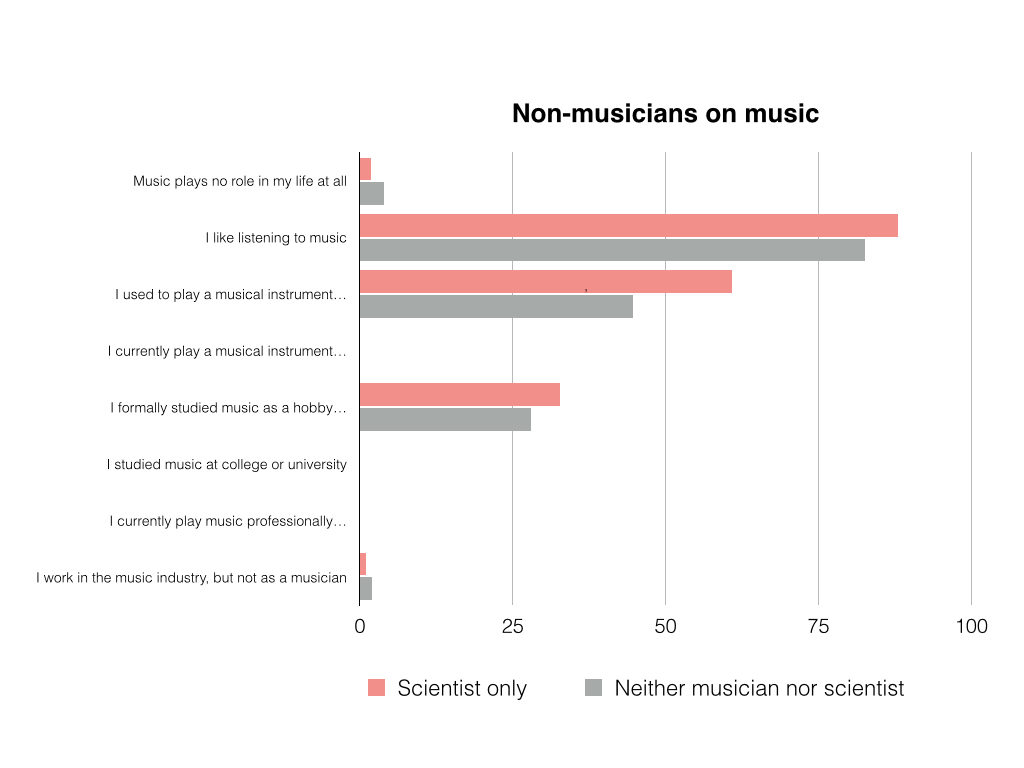 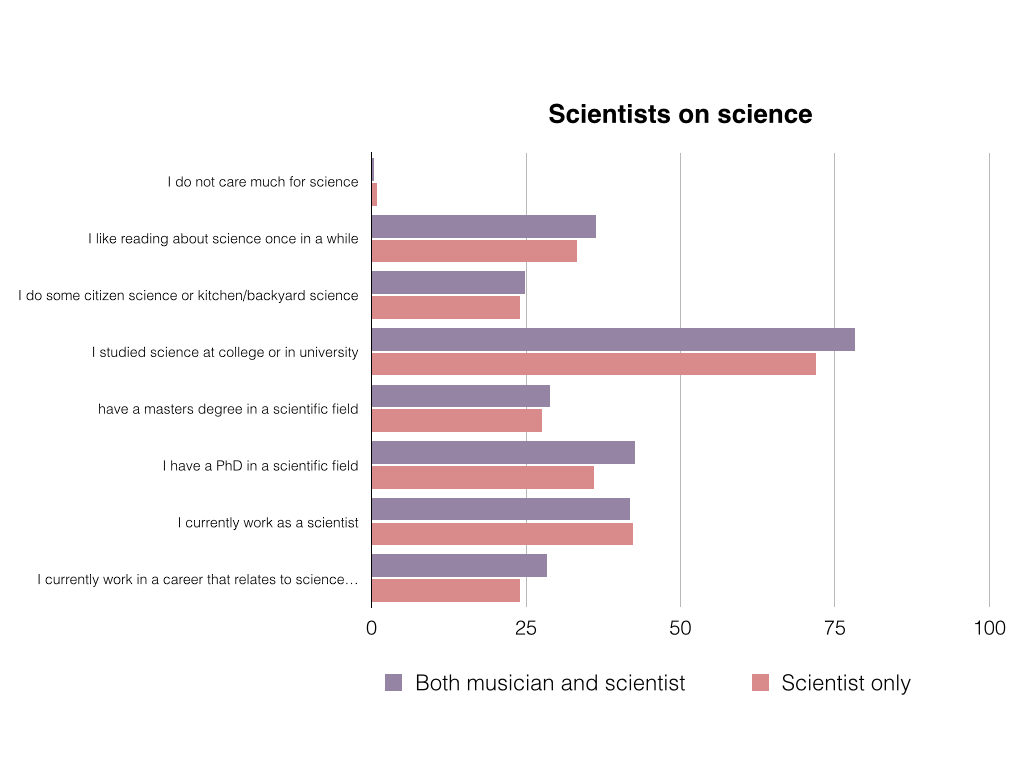 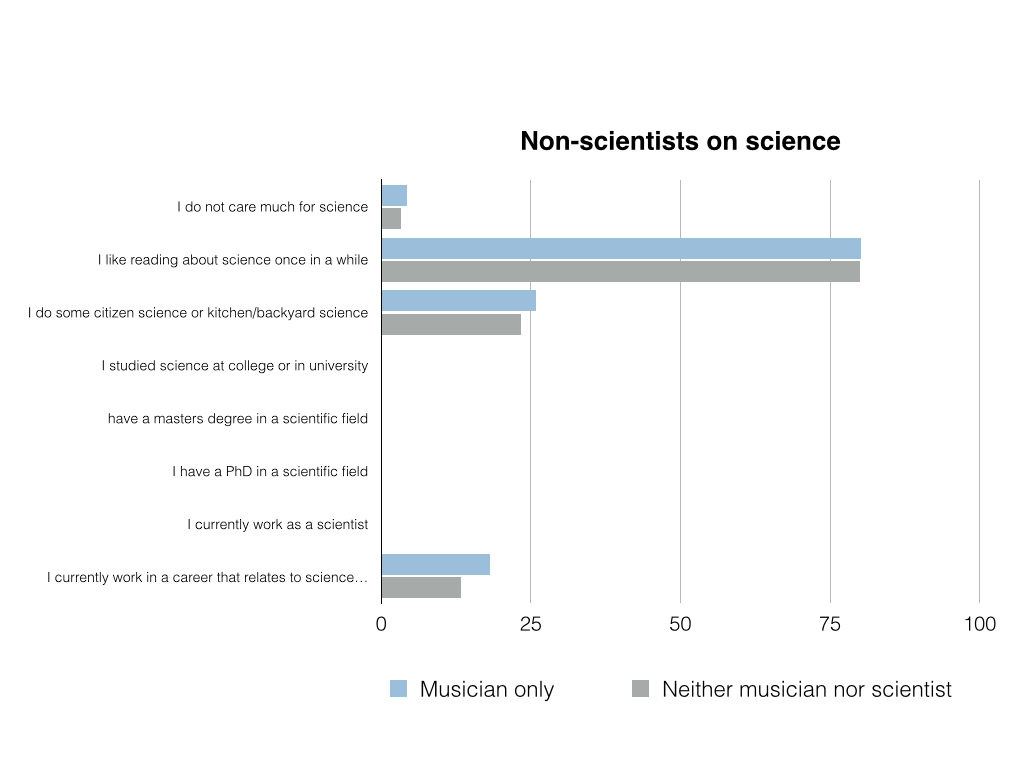 Participants were also asked to (optionally) list other things they like to do in their spare time. The most popular hobby was reading, among all groups. The word “time” also features prominently in the word cloud, and was often used in the context of “spend time (doing/with)”. 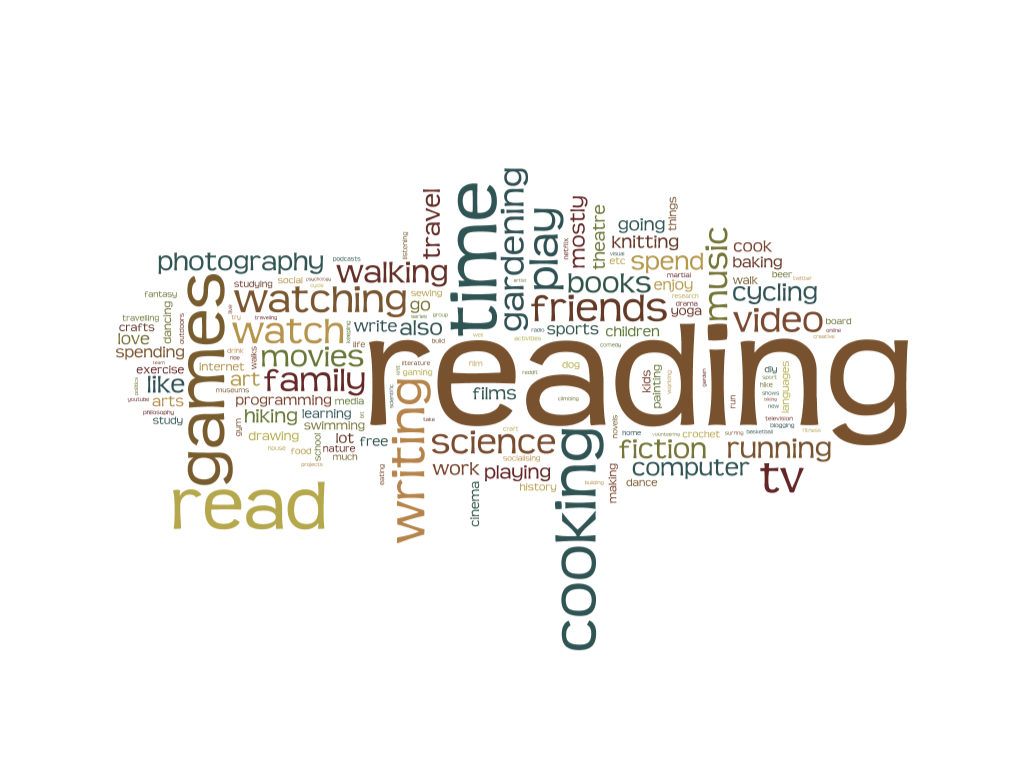 I also asked everyone if they could name a musisci. The most popular answers were Brian May, Brian Cox, Albert Einstein, Richard Feynman and Alexander Borodin.

The rest of the cloud is very hard to read, so I made another version without the top five, and here we see less famous musiscis pop up – either less famous overall, or less famously active in both fields. 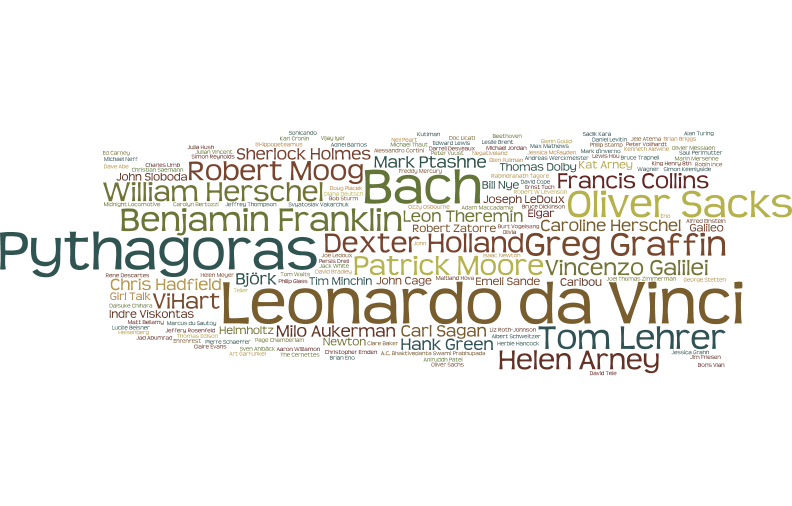 Finally, a breakdown of age, gender and location of the survey participants. The age and gender question was optional, but almost everyone answered. 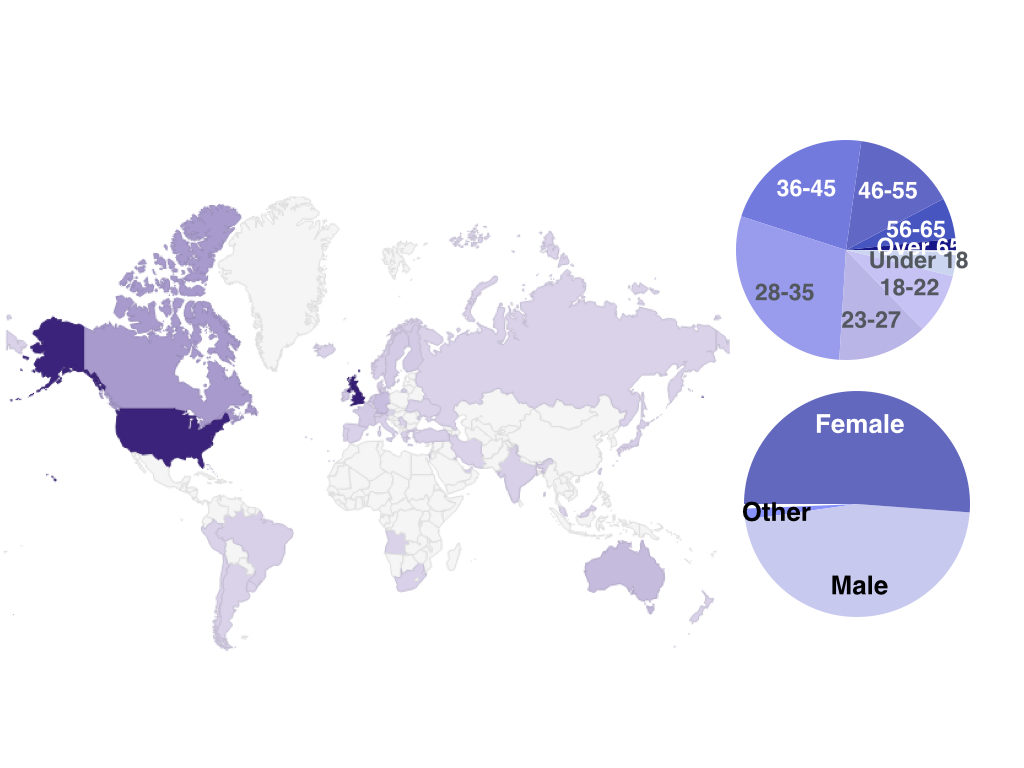 *There were 767 answers in total, but four of the responses had duplicate email addresses. There may have been a few more duplicates among those who didn’t leave an email address, but that’s impossible to tell.

[…] the full results of the survey, see my blog post on easternblot.net. I’m also starting a quarterly newsletter about the […]